Home » Geopolitics » U.S. Empire Still Incoherent After All These Years

U.S. Empire Still Incoherent After All These Years

Exclusive: Without solid economic, political and ideological bases, the U.S. lacks the legitimacy and authority it needs to operate beyond its borders, argues Nicolas J.S. Davies in this essay.

I recently reread Michael Mann’s book, Incoherent Empire, which he wrote in 2003, soon after the U.S. invasion of Iraq. Mann is a sociology professor at UCLA and the author of a four-volume series called The Sources of Social Power, in which he explained the major developments of world history as the interplay between four types of power: military, economic, political, and ideological. 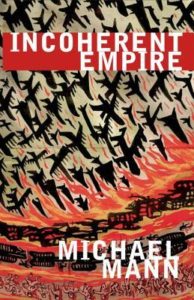 In Incoherent Empire, Mann used the same framework to examine what he called the U.S.’s “new imperialism” after the invasions of Afghanistan and Iraq. He predicted that, “The American Empire will turn out to be a military giant; a back-seat economic driver; a political schizophrenic; and an ideological phantom.”

What struck me most forcefully as I reread Incoherent Empire was that absolutely nothing has changed in the “incoherence” of U.S. imperialism.  If I picked up the book for the first time today and didn’t know it was written 15 years ago, I could read nearly all of it as a perceptive critique of American imperialism exactly as it exists today.

In the intervening 15 years, U.S. policy failures have resulted in ever-spreading violence and chaos that affect hundreds of millions of people in at least a dozen countries. The U.S. has utterly failed to bring any of its neo-imperial wars to a stable or peaceful end.  And yet the U.S. imperial project sails on, seemingly blind to its consistently catastrophic results.

Instead, U.S. civilian and military leaders shamelessly blame their victims for the violence and chaos they have unleashed on them, and endlessly repackage the same old war propaganda to justify record military budgets and threaten new wars.