Soros and the EU Commission are now against the free Internet 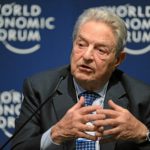 With his investments, Soros has become a billionaire. Unfortunately, for many years he has been interfering in the political and demographic developments in Europe and has been financially promoting ethnic replacement. Now he is turning against CSU, Facebook and Twitter because they are endangering his leftist revolution.

Like every year, Soros gave his speech on the state of the world at the World Economic Forum in Davos (see movie).1)The neo-liberal quasi self-made sage spoke to his heart’s content, while the open, freedom-loving society he invited soaked in each of his words like a sponge. Now hardly anyone noticed that Soros was trying to take away their freedoms.

In the beginning Soros spoke about Russia, which he describes as a mafia state, which adopted nationalist ideology and then he said that the US under Trump’s presidency will become similar in this respect. He now also included Hungary in the axis of evil. It is nothing new because he has always been hostile towards governments that are trying to protect their citizens from the consequences of open borders policies and the idea of an open society. What was new was that he scourged social networks. Soros maintains that since they have grown into powerful monopolies, they influence our behaviour and consciousness (especially during election time) too much.

They deceive their users by manipulating their attention and directing it towards their own economic interests and (…) making them dependent on their services (…) The platforms resemble casinos (…) and force people (…) to renounce what John Stuart Mill called the freedom of thought. Is that why Facebook and Twitter are banned in countries like China, Afghanistan and North Korea? Are people really allowed to think freely without access to the internet and the opportunity to post their opinions?