Early on Sunday, Turkish ground forces crossed the border and pushed into northern Syria’s Afrin province on Sunday, Ankara said after launching artillery and air strikes on a U.S.-backed Kurdish militia it aims to sweep from its border.

Turkey sent armored divisions into northwest Syria after a day of airstrikes as part of ‘Operation Olive Branch’ which bombed Kurdish YPG forces (“People’s Protection Units”) in and around Afrin to drive the US-allied Kurdish militia from the area. Turkish-backed Free Syrian Army fighters along with Turkish troops are now moving into the area, according to state-run Anadolu news agency. 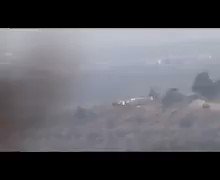 “Our jets took off and started bombing. And now, the ground operation is underway. Now we see how the YPG … are fleeing in Afrin,” President Tayyip Erdogan said. “We will chase them. God willing, we will complete this operation very quickly.”