Home » Survival » The end of the “population problem”? Another Seneca cliff in our future

The end of the “population problem”? Another Seneca cliff in our future

The end of the “population problem”? Another Seneca cliff in our future

If the demographic projections by the United Nations will turn out to be true, the world population should reach over 11 billion people by 2100. Some think that it will be a disaster, others see it as a good thing as it would bring more economic growth. But is it really possible to reach such numbers? Can we really think that women would be so stupid to continue making children even in the midst of the crisis caused by declining natural resources and worsening ecosystem disruption? (unless the Pope himself were to tell them to stop)?

Yet, some models tell us the human population could keep increasing even after the collapse of the world’s economy. There exists something called the “demographic transition” and it is a historical observation that may be extrapolated into the future. The data show a sort of “U-shaped fertility curve” that makes the poor and the very rich to be more fertile than those who are in the middle. When applied to the scenarios of “The Limits to Growth” of 1972, this idea generated a curious behavior, with the impoverishment of the population causing an increase in the birthrate that causes the population to continue increasing for a few decades after the collapse. 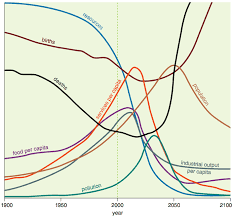 But, as it is always the case, extrapolating past trends into the future is extremely dangerous. In particular, it is at least improbable that the post-collapse world will be like running the same movie in reverse. The demographic transition has been observed to occur in growing economies, it won’t simply change sign and reverse itself in contracting economies. To see how it works we can look at the demographic trends in Russia.

← Disconnect: Congressional hawks hate sustainability, but love military that seeks it Dmitry Orlov: The US Is Sleepwalking Towards A Nuclear Confrontation →