Encana to cut workforce another 20% on top of earlier downsizing

Encana to cut workforce another 20% on top of earlier downsizing 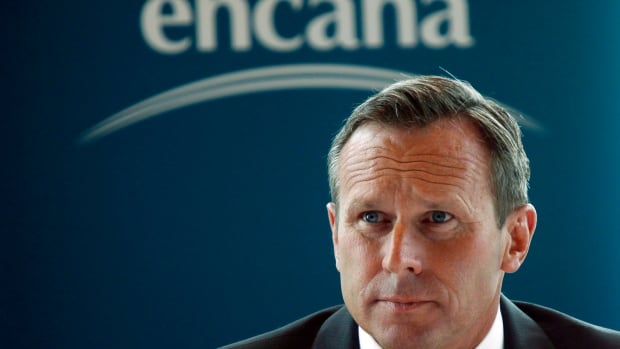 Doug Suttles, CEO of Encana Corp., speaks to reporters in Calgary in 2013. The Calgary-based company announced on Wednesday it’s planning a further 20 per cent reduction in its workforce to achieve up to $250 million in additional cost savings this year. (Jeff McIntosh/The Canadian Press)

Encana Corp. says it’s planning a further 20 per cent reduction in its workforce as it works to achieve up to $250 million in additional cost savings this year, beyond what had previously been announced.

Details on how many jobs will be affected and when they’ll happen weren’t immediately available.

But the company says by the end of the year, its workforce will be half the size it was in 2013. That works out to roughly 1,600 job cuts over three years.

The Calgary-based oil and gas producer announced the cuts with its fourth-quarter financial report, which included a $612 million net loss or 72 cents per share — mostly the result of asset write downs and other non-operating items.

Those were partly offset by 36 per cent increase in Encana’s liquids production since the fourth quarter of 2014, and previous cost-cutting measures that helped increase Encana’s cash flow despite lower commodity prices.

Excluding $514 million in asset impairments and other items such as foreign exchange, Encana’s operating earnings in the fourth quarter were $111 million or 13 cents per share — up from $35 million or five cents per share a year earlier.

Encana chief executive Doug Suttles said the company enters 2016 with a strong balance sheet, a high-quality portfolio of assets and improved efficiency that offset the impact of reduced capital spending and lower prices for its oil and gas.

← Why We Consume: Neural Design and Sustainability Scientists calculate our debt to the Earth →