Food prices increased by four per cent over the year, largely because of the low loonie 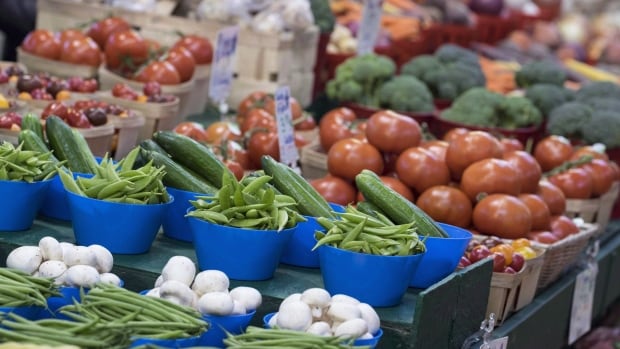 According to the Consumer Price Index, food prices increased by four per cent from Jan. 2015 to Jan. 2016. But fresh vegetables alone were up 18 per cent. For example, just in December, the price of tomatoes shot up by 30 per cent. (Paul Chiasson/Canadian Press)

Fruit and veggie lovers have seen their pocketbooks pinched over this past year as the precious produce spiked in price, prompting an overall increase in food costs.

“Well, obviously the weak loonie has had an impact on produce and fruit prices,” said Sylvain Charlebois, professor of marketing and consumer studies at the University of Guelph Food Institute. “They’ve gone up significanty.”

According to the Consumer Price Index, released by Statistics Canada on Friday, food prices increased by four per cent in January 2016, compared to the same month a year earlier. But fresh vegetables were up 18 per cent over that period, while the price of tomatoes alone shot up 30 per cent from the previous month.

Lettuce was up nearly 18 per cent in January, compared to a year earlier, while other fresh vegetables, including broccoli, cauliflower, celery and peppers, registered their largest year-over-year increase since April 2009, rising 23 per cent over the previous year.

Fresh fruit was up nearly 13 per cent for the year, with apples rising 16.6 per cent and oranges 11.

‘Driven by the weakened currency’

“Clearly many importers had to procure some produce outside of North America and that really increases transportation costs,” Charlebois said. “Peppers — we’ve had to go to Europe to get some of those products — so that’s why some products have increased by more than 30 per cent in a month.”

← Panic Below The Surface: “Banks Are Selling Energy Loans At Cents On The Dollar To Ensure Their Own Survival” Cameron Unleashes ‘Project Fear’ – UK Military Leaders Warn Against Brexit Threat To National Security →