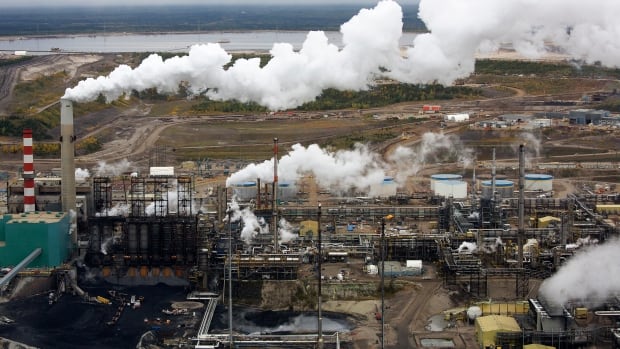 The processing facility at the Suncor oilsands operations near Fort McMurray, Alta. A new report from Oil Change International finds that G20 countries are spending $452 billion US a year subsidizing their fossil fuel industries. (Todd Korol/Reuters)

G20 countries are spending $452 billion US a year subsidizing their fossil fuel industries and are undermining the world’s effort to combat climate change in the process, according to a new international report by an environmental advocacy group.

“It’s quite a shocking amount. I think we were surprised the scale of the subsidies is so great,” said study co-author Alex Doukas, who is senior campaigner with Oil Change International.

“We’re subsidizing companies to search for new fossil fuel reserves at time when we know that three-quarters of the proven reserves have to stay in the ground if we hope to avoid the worst impacts of climate change,” said Doukas in an interview from Washington.

“So paying companies to find more fossil fuels is folly.”

It’s the first time annual subsidies from all G20 countries have been added up and individually analyzed.

It shows that Canada’s total federal and provincial support for the petroleum industry was close to $2.7 billion US ($3.6 billion Cdn at current exchange rates) in the 2013-14 fiscal year, with federal subsidies accounting for roughly $1.6 billion US of that.

The report says at least another $2.5 billion US of taxpayers’ money also goes to petroleum companies working in other countries through Export Development Canada “and may be significantly higher.”

Canada both a ‘leader and a laggard’

Despite that, the report calls Canada one of the leaders in efforts to end subsidies for fossil fuels — sort of.