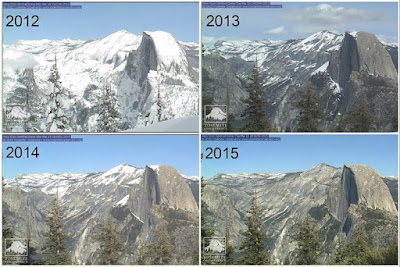 It may be a see-saw course, but it’s riding an uphill train.

A bit ago I wrote, regarding climate and tipping points:

The concept of “tipping point” — a change beyond which there’s no turning back — comes up a lot in climate discussions. An obvious tipping point involves polar ice. If the earth keeps warming — both in the atmosphere and in the ocean — at some point a full and permanent melt of Arctic and Antarctic ice is inevitable. Permanent ice first started forming in the Antarctic about 35 million years ago, thanks to global cooling which crossed a tipping point for ice formation. That’s not very long ago. During the 200 million years before that, the earth was too warm for permanent ice to form, at least as far as we know.

We’re now going the other direction, rewarming the earth, and permanent ice is increasingly disappearing, as you’d expect. At some point, permanent ice will be gone. At some point before that, its loss will be inevitable. Like the passengers in the car above, its end may not have come — yet — but there’s no turning back….

I think the American Southwest is beyond a tipping point for available fresh water. I’ve written several times — for example, here — that California and the Southwest have passed “peak water,” that the most water available to the region is what’s available now. We can mitigate the severity of decline in supply (i.e., arrest the decline at a less-bad place by arresting its cause), and we can adapt to whatever consequences can’t be mitigated.

But we can no longer go back to plentiful fresh water from the Colorado River watershed. That day is gone, and in fact, I suspect most in the region know it, even though it’s not yet reflected in real estate prices.

← Can a Tableful of Food be Produced Economically in an Urban Environment? Saudi Oil Minister Puts On Brave Face Amid Severe Headwinds: “Eventually, Economic Producers Will Prevail” →