Selco’s Guide to Looting and Scavenging When the SHTF

Selco’s Guide to Looting and Scavenging When the SHTF

Through the media, we have gotten a picture of scavengers, so there are movies and book about guys who ride motorcycles while wearing helmets with horns. These guys are looting and scavenging after the SHTF. And then, in this fantasy, there are good guys who do not do that, except maybe to get some interesting book or similar.

The interesting thing is the fact that guys who “scavenge” somehow through all those movie and book cliches are understood as bad guys and psychos. Through the news, we see folks who loot as a mindless mob who drag out big screen plasma TVs while floods are coming.

It would be cool if we could try to form our opinion and adopt some knowledge and strategies without those images from above.

It is nearly impossible, but let’s try.

Let’s try to form our strategies about looting and scavenging through the following topics.

One of my favorite sayings is that “curiosity killed the cat” and I think I survived many times during my SHTF situation thanks to the fact that I kept it on my mind all the time.

We are living in the times where we simply we “want to see and understand”, or even better where we want to have that feeling of “amusement”, moments of excitements.

Horse playing has become our culture, and a lot of people do stupid things just because “it looks cool”.

A real SHTF event has much higher stakes, so you need to have the thought constantly in your mind that says: “Do I really need to do that?”

What if things really went crazy and you were in a situation in which you needed to scavenge? Would you know where to find the things you might need, like food, drugs, or water? This useful article will help you find and record the essential resources in your area – while the information is still easy to obtain. ~ Editor

You need to know where essential resources in your area are located. During a disaster you never know what you might need, so grab every bit of free information about where you live that might conceivably be useful after the SHTF while you still can.

GPS mapping may or may not be available to you during an emergency so we recommend that you obtain the following addresses on paper, but also in computer files. The maps presented in Part 3 will be very useful in navigating your way to these locations should your GPS not be working.

You should also compile the following lists into computer files and print them out. I recommend you use duckduckgo.com for Internet searching because they don’t track or save your searches. Given that the local telephone book no longer exists you can try yellowpages.com/ for many of these.

Put all the lists in one or more 3 ring binders with tabs as appropriate. Store all the lists and the maps in one place. Also, store these maps and lists on USB flash drives or miniSD cards as appropriate to your needs. See Part 2 of this series for computer storage suggestions. If your phone will allow you to do so, you should also store selected files on your smartphone along with the appropriate app to read them.

3 Places Preppers Would Never Think to Scrounge For Survival Supplies

3 Places Preppers Would Never Think to Scrounge For Survival Supplies 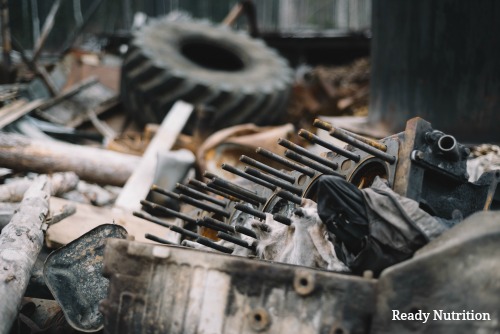 This is a segment that you can take for ideas and build off of for yourself.  Survival is all about improvisation, and adaptability: those who adapt to the situation have a better chance at making it through the tough times.  This is a different kind of segment, though.  The information here is how to make it on what you can scrounge in the wintertime. Sounds simple, right? It isn’t.

We Live in an Imperfect World That is Not Prepper-Friendly

The reason is the “perfect” world we live in does not present you with many opportunities to train. For that matter, there isn’t a lot of encouragement either. Certainly, no one will encourage you: not your family members, your neighbors, or community in general, let alone the government…local, state, or federal.  That’s not “life.”

No, most of these guys just mentioned are only concerned with you playing to the system by getting up in the morning, going off to your work (to earn taxable income) so that you can pay your taxes, consuming foods, materials, and other necessities (with taxes), driving (using fuel that’s taxed) home…the one with your mortgage and property taxes, that have, well…a nice, “established” way for you to keep your lawn, grounds…you know…how to live, right?  In an acceptable manner, right?  A small cog in a giant machine, working and consuming until it’s time to call your number in.  Then your money and property… what you have left, that you paid taxes on all the way?  Time to tax it again until the government (kicking and screaming) magnanimously gives what’s left to your heirs.

As a general reminder, you never know when the next emergency will happen, so make sure you have the basic necessities to get through the most unpredictable situation.