Why Germany Is Going To War With Gold

Why Germany Is Going To War With Gold

Owning gold is a way to get out of this “debt trap”, but governments don’t want you to own gold, especially in Germany

Germans, like Indians and Chinese, love their gold – although their reasons for buying and keeping bullion are somewhat different.

In China and India, gold jewelry is a status symbol – a sign of wealth and success. In Germany, owning gold bars and coins, maybe a 24-karat necklace or two, is a means of preserving wealth, especially in times of war or economic crisis, something never far from Germans’ minds, considering their history.

Indeed the “war guilt” Germans experience over the atrocities of Nazi Germany is accompanied by fears that their government could again lose control of fiat money, as the Weimar Republic did in the 1920s, leading to devastating hyper-inflation.

In India “a marriage is not a marriage without gold.” Indians find it auspicious to be-gift gold jewelry during the Diwali festival, which begins in October, and wedding season. Gold-shopping for the bride is thought to bring good fortune and invoke the blessings of a Hindu goddess. At nearly 20 million weddings a year, Indians’ annual demand for the precious metal exceeds 514 tonnes. Easy to see why the country’s private gold holdings are the largest in the world, a mind-boggling 24,000 tonnes. (almost as much as the world’s top 10 central bank holdings combined)

However in 2016 China overtook India as the world’s top buyer of gold jewelry. The country’s growing throng of affluent consumers is driving demand for gold rings, bracelets and necklaces, especially in January and February when many Chinese purchase gold jewelry as gifts for Chinese New Year. According to McKinsey & Company, by 2025 China will represent up to 44% of the global luxury jewelry market.

MIT: The Energy System Of The Future Is Closer Than We Think

MIT: The Energy System Of The Future Is Closer Than We Think

John Deutch, an Institute Professor at MIT, has recently presented a study, ‘Demonstrating Near Carbon Free Electricity Generation from Renewables and Storage’, at an energy seminar at Stanford University.

According to Deutch, the best way to see if the hybrid electric systems (HES) of wind, solar, and storage could compete in costs with natural gas-fired electricity generation is to organize a large-scale demonstration to show if those HES could meet electricity demand of a relatively large service area “rather than rely on government sponsored large scale demonstration projects or regulatory mandates compelling deployment of storage.”

“Uncharacteristically I have been an optimist—I am an optimist—about this, and I believe we are very close to having an economically competitive triad—wind, solar and storage—to produce electricity at a cost as low as the cheapest fossil alternative, which is natural gas combined cycle,” Deutch said during his presentation. “We are close to having this be a commercial operation.”

The large-scale demonstration would show the private sector if those hybrid systems could be competitive, he said, noting that the base analysis was made for the ERCOT service area in Texas, and additional studies were made for Iowa and Massachusetts. Related: U.S. Political Discourse Could Boost Safe Haven Demand For Gold

According to Deutch, Puerto Rico and Hawaii could be suitable places for energy developers to show HES viability. The MIT scientist proposes developers to bid for 20-year contracts with a utility and all the government has to do is to ensure a ‘regulatory wrap’ to allow the project.

The Big Bet Against Italian Banks

The Big Bet Against Italian Banks

The eurozone’s third-largest economy, Italy, is marooned in a deep political and economic crisis, with seeming endless problems: an economy that has barely grown in decades, sky-high unemployment rates, ballooning national debt, an inability to form a stable coalition government and, lately, a looming showdown with the EU over mounting debt.

These have precipitated a wave of populism that has rejected the old establishment and brought in a new guard.

Unfortunately, that has done little to resolve another Italian bugaboo: a massive banking crisis.

European banks have accumulated about $1.2 trillion in bad and non-performing loans (NPLs) that have continued weighing down heavily on their balance sheets. Italian banks are sitting on the biggest pile of bad debt: €224.2B ($255.9B), with NPLs and advances making up nearly a quarter of all loans.

As if that is not bad enough, the banks now have to contend with potentially heavy penalties coming from Brussels after Italy’s recalcitrant leadership refused to revise the country’s fiscal 2019 budget to lower debt and borrowing.

The sharks can already smell the blood in the water, and investors have been shorting Italian banking stocks to death. Italian banks hold nearly a fifth of the country’s government bonds. 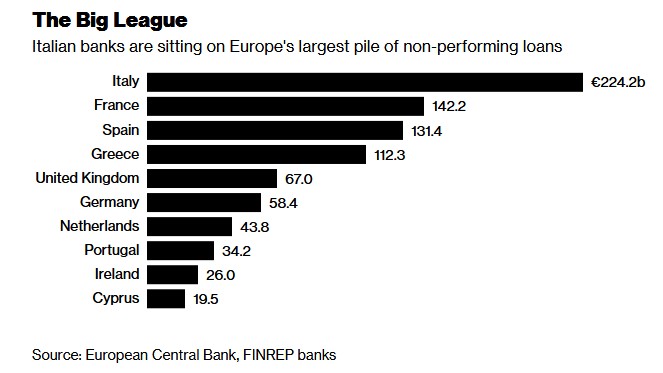 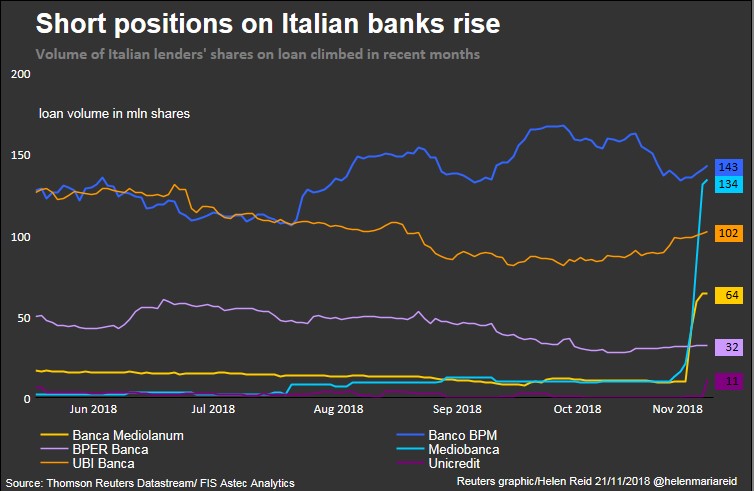 Short sellers have mainly been targeting medium-sized lenders as well as asset manager Banca Mediolanum and investment bank Mediobanca. According to FIS Astec Analytics data, the volume of these banks’ shares on loan—a good proxy for short interest—has shot to its highest in 15 months.

Short interest on Mediolanum’s shares now stands at 8.7 percent of outstanding shares, while Mediobanca has 15 percent of its shares sold short.

Rome Refuses To Back Down

In a dynamite interview, Richard Fisher, former president and CEO of the Federal Reserve Bank of Dallas, gave what may be the biggest confession you’ll ever see and hear from a Federal Reserve insider: the Federal Reserveknowingly “front ran” the US stock market recovery (i.e., manipulated the market) and created a huge asset bubble. Fisher expresses certainty that the “juiced” stock market will come down and is coming down now that the Fed has taken its foot off the accelerator … and that it has a long way yet to go.

While that is no news to readers here whose eyes are wide open, a “market put” has been denied by the Fed and by many market advisors. That the market was an overinflated bubble created by the Fed has been denied, too; but Fisher clearly and gleefully admits the Fed created a bubble that will have to deflate now that the Federal Reserve’s stimulus is off.

As one of the members of the Federal Reserve’s FOMC (the Federal Open Market Committee, which sets US monetary policy), Richard Fisher participated in and voted on all of the Fed’s policies of zero interest and quantitative easing, so he has inside knowledge of all the discussions behind the scenes at the Fed.

Here are the significant quotes from Richard Fisher on CNBC’s video:

What the Fed did — and I was part of that group — is we front-loaded a tremendous market rally, starting in 2009.

It’s sort of what I call the “reverse Whimpy factor” — give me two hamburgers today for one tomorrow.

I’m not surprised that almost every index you can look at … was down significantly. [Referring to the results in the stock market after the Fed raised rates in December.]

Basically, we had a tremendous rally, and I think there’s a great digestive period that is likely to take place now, and it may continue.