Five years after we first reported on the “Goldman whistleblower” at the NY Fed, Carmen Segarra, the former bank examiner is out with a new book based on more than 46 hours of secret recordings.

“Noncompliant: A Lone Whistleblower Exposes the Giants of Wall Street” is a 340-page exposé which vastly expands on the breadcrumbs Segarra has been dropping since word of her recordings first came to light, according to the New York Post.

Segarra was a former bank examiner who looked into Goldman Sachs for the Federal Reserve Bank of New York, and claims she got fired in 2012 after making too much noise about Goldman’s alleged conflicts.

The New York Fed has often been blasted for its lackadaisical approach to overseeing banks leading up to the 2008 financial crisis. Its last president, William Dudley, was named in 2009 after spending 21 years at Goldman. But Segarra’s book claims that the problem persisted for years after the crisis, with regulators happy to act on the banks’ behalf.

“We want [Goldman] to feel pain, but not too much,” her boss — who goes by the pseudonym Connor O’Sullivan in the book — told her, Segarra claims. –NY Post

The recordings were made over a seven month period while Segarra worked at the New York Fed. Neither Goldman nor the NY Fed have disputed the authenticity of the tapes.

Central to allegations of shady reglulation was a 2012 deal in which energy giant Kinder Morgan would acquire rival El Paso Corp. for $21.1 billion – a deal which Goldman advised both sides of, while “its lead banker advising El Paso, Steve Daniel, owned $340,000 in Kinder Morgan stock” according to the Post.

The day I found out it was all rigged 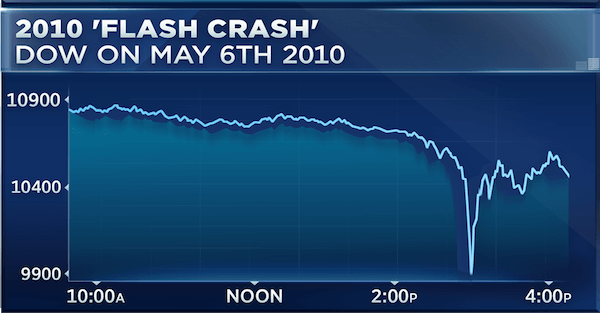 The day I found out it was all rigged

The most exciting stories from the morning’s newspapers were reviews of the upcoming Iron Man 2 film.

But all that changed at around 2:45pm when, without warning, the stock market crashed, and the Dow Jones Industrial Average dropped 1,000 points within minutes.

It was unprecedented… especially because there was absolutely no reason why stocks should have fallen so much.

It’s not like Apple had declared bankruptcy, or the Central Bank had jacked interest rates up to 50%. Up until that point it had been pretty quiet in the markets.

As it turned out, the reason behind the crash was that the investment banks’ fancy trading algorithms had gone completely haywire.

Several of the largest banks had developed autonomous software that was capable of trading billions of dollars without the need for human beings.

And at 2:45PM that day, their software started to fail… inexplicably selling stocks to the point that prices collapsed nearly 10% in minutes.

They called it the Flash Crash, and, even though stocks had largely recovered by the end of the day, the banks lost an enormous amount of money.

Then something interesting happened. Within a few days, the major exchanges announced that they would CANCEL many of the trades that took place during the Flash Crash window.

In other words, they were handing the banks their money back.

I never forgot that moment… because I received an email from my broker informing me of the news.

They were canceling a profitable trade that I had placed during the Flash Crash window, effectively giving it back to the banks.

When the banks’ trading algorithms performed well and they all made money, the profit was theirs to keep.

While attending the ultra-exclusive Ambrosetti Workshop, University of Chicago finance professor Luigi Zingales took a few minutes to discuss income inequality in an interview with Bloomberg.

Moving on: when asked if central bank policy is making people feel that they’ve really lost out, Zingales reiterates what we’ve known all along, namely that the real consequences of central bank actions don’t matter, what matters is simply how people perceive the central bank and its actions. If people are told enough by smart people on television that the economy has been fixed, and the market is a reflection of the fundamentals, then they’ll blindly support anything the fed does. After all, as long as whatever voodoo is going on over at the Eccles building is pushing 401k balances higher, then it must be right.

He then goes on as far as stating that capitalism in the U.S. has failed and been converted into a perverted, mutant, crony version and that “the game is rigged.”

“I think that people are willing to support capitalism if capitalism is providing growth, providing better income for everybody, and also if it has some at least appearance of being fair. Unfortunately, none of these conditions are in place today in the United States. I think that growth is limited, and disproportionately goes to a small fraction of the population. And there is a sense that the game is rigged.”