In January 2020, the NASDAQ stock market’s index stood just under 10,000. In the March crash, it fell to 7,000. As of July 10, 2020, it hit 10,600. The U.S. government’s economic policies produced a “recovery” for the rich who own the vast bulk of stocks. Their holdings are worth more now than before COVID-19 hit us. The other major benchmarks for securities, the Dow Jones Industrial Average and the Standard and Poor 500, show similarly dramatic, slightly smaller recoveries.

Massive government economic intervention—what most of its current beneficiaries have always denounced—subsidized those recoveries. The Federal Reserve pumped unprecedented amounts of new money into the U.S. economy after mid-March. That money poured into the stock market and fueled its rise. The U.S. Treasury provided unprecedented direct cash supports to much of corporate America.

Over the same time, government economic support for the working class was too little, too late, and totally inadequate to what could and should have been done. In their unequal impacts, government economic policies were cruel and unjust. In this, they resemble government public health policies. With under 5 percent of the world’s population, the United States accounts for about 25 percent of COVID-19 cases and about 24 percent of COVID-19 deaths globally. All but the most ideologically blinded (and government supporters) know what such a statistic means.

I focus here on how the government’s economic policies affected corporations versus employees, the rich versus the middle class and the poor. Direct government support sustained most corporations. Bigger and richer corporations hire more and better lobbyists, make larger actual or potential donations to politicians and parties, and so on. They thus got big portions of government help. In general, the pandemic and crash hurt medium and small businesses more than big ones, while the latter got disproportionate government help.

How long will the rich be willing to share the roads with the poor?

How long will the rich be willing to share the roads with the poor? 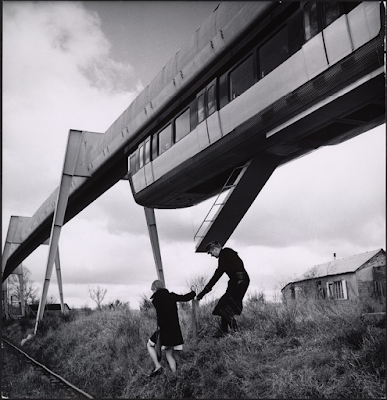 In Ray Bradbury novel “Fahrenheit 451” we are told of a world with no private cars (above, a still from the 1966 movie by François Truffaut). Bradbury had correctly understood that dictatorships not only tend to burn books but also don’t like their citizens to own private cars. In this post, I argue that the growing social inequality in the West may soon lead to the demise of the private car for the middle class. This evolution may be helped by such concepts as TAAS (transportation as a service).

In his “The Betrothed”, (1827) Alessandro Manzoni tells us of how a dispute on the right of the way led to a bloody duel between two noblemen. The story takes place during the 17th century and it seems that, at that time, whether one should cede the way to another was a question of rank.

Of course, in our (perhaps) enlightened times, this attitude looks absurd. When you see a stop sign at a crossroad, you are supposed to respect it, independently of whether you drive a rusty Toyota Corolla or a shiny Porsche Cayenne. But, if you think about that, the rich must be very unhappy about having to share the road with all those poor people with their clunkers. They might well be thinking of ways to have the street all for themselves, avoid traffic jams, and regain the mobility that cars provided when there weren’t so many of them.

Is it possible? Well, think of this: the diffusion of private cars in the Western World, and in particular in the US, took place during a period when inequality was declining and reaching values which were possibly the lowest in modern history. But things have changed a lot since then. Here are some data for the Gini Index in the US (from the US Census Bureau) 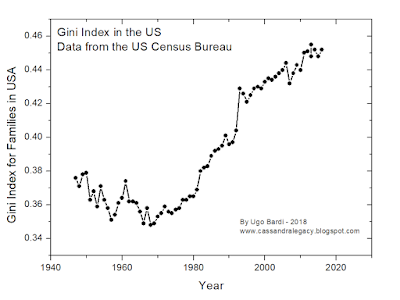 A bumper catch off the coast of northern Norway may be bad news for fishermen in southern waters. Image: Bo Eide via Flickr

As temperatures rise with climate change, the Earth’s natural capital will change too − but there may be few winners, even among the wealthy.

LONDON, 5 March, 2016 – Climate change could seriously redistribute resources and reallocate wealth – but not in a fair way.

In a reverse of the famous Robin Hood folklore, it could rob from the poor to give to the rich, according to researchers. Yet even the rich may not feel any richer.

In one clear instance, as scientists have repeatedly warned, fish stocks are likely to move away from the equator and towards the poles, as the tropics heat up and expand.

This means that at least one valuable resource will move away from some of the world’s poorest nations, and in the direction of societies that are relatively wealthier − if only because economic power has for so long been vested in the temperate zones. And this shift will have economic consequences.

Eli Fenichel, assistant professor of bioeconomics and ecosystem management at the Yale School of Forestry and Environmental Studies in the US, says: “People are mostly focused on the physical reallocation of these assets, but I don’t think we’ve really started thinking enough about how climate change can reallocate wealth and influence the prices of those assets. We think these price impacts can be really, really important.”

Only last month,  Dr Fenichel identified a way of calculating a real cash value for what environmentalists call “natural capital”.

Now he and other colleagues, in a study for Nature Climate Change, have started to think about where and for whom the cash might start accumulating. He has no immediate answer.

Seven Things You Need to Know About Inequality

Seven Things You Need to Know About Inequality

The gap between rich and poor is growing, but there are solutions, says The Tyee’s author of ‘A Better Place on Earth.

In recent weeks I’ve had the chance to talk at launches in Victoria and Vancouver about economic inequality and my bestselling book A Better Place on Earth: The Search for Fairness in Super Unequal British Columbia.

There’s been attention from Global News, the Vancouver Sun, CBC radio, CKNW and other media outlets. B.C. Booklook said I should be gagged for spreading “malicious truths.”

Following are seven key facts I think you should know about the growing gap between rich and poor in B.C. and elsewhere:

1. Inequality has been rising for three decades: Anyone in a city in British Columbia is well aware that while some people have wealth counted in the billions of dollars, others sleep in doorways and eat from food banks. What we know from experience is borne out by statistics, which show that inequality has grown in Canada, like in much of the economically developed world, since the 1980s. In B.C. the gap has grown even faster, with inequality spiking from below the Canadian average to well above it in the early 2000s. The top 10 per cent now hold 56.2 per cent of the wealth in the province, the biggest share anywhere in Canada.

2. High inequality has many consequences: Research from around the world shows that greater inequality is associated with all kinds of negatives, including worse health outcomes, poorer education, more teen pregnancy, greater substance abuse, higher rates of mental illness and higher levels of incarceration. It is also linked to reduced opportunity, where children are likely to be stuck in the same income bracket as their parents. Inequality makes economies weaker, since many people in the bottom and middle tiers lack buying power. It is frequently cited by economists as a key reason why the recovery from the 2008 financial crisis has been so lacklustre. We’re all affected.

We Live In An Era Of Dangerous Imbalances

We Live In An Era Of Dangerous Imbalances

And history shows they correct painfully

The intervention by the world’s central banks has resulted in today’s bizarro financial markets, where “bad news is good” because it may lead to more (sorry, moar) thin-air stimulus to goose asset prices even higher.

The result is a world addicted to debt and the phony stimulus now essential to sustaining it. In the process, a tremendous wealth gap has been created, one still expanding at an exponential rate.

History is very clear what happens with dangerous imbalances like this. They correct painfully. Through class warfare. Through currency crises. Through wealth destruction.

Is that really the path we want? Because we’re for sure headed for it.

…click on the above link to see the video…

A number of Republican-led states are considering tax changes that in many cases would have the effect of cutting taxes on the rich and raising them on the poor.

Conservatives are known for hating taxes but particularly hate income taxes, which they say have a greater dampening effect on growth. Of the 10 or so Republican governors who have proposed tax increases, nearly all have called for increases in consumption taxes, which hit the poor and middle class harder than the rich.

Favorite targets for the new taxes include gas, e-cigarettes, and goods and services in general. Gov. Paul R. LePage of Maine, who wants to start taxing movie tickets and haircuts, is also proposing a tax break for the lowest-income families to relieve some of the pressure.

At the same time, some of those governors — most notably Mr. LePage, Nikki R. Haley of South Carolina and John R. Kasich of Ohio — have proposed significant cuts to their state income tax. They say that tax policies that encourage business growth provide more jobs and economic benefits for everyone.

A new report suggests that these states could be creating financial problems down the road. The strategy of shifting from income taxes to consumption taxes has caused huge budget shortfalls in Kansas and, more recently, North Carolina, which announced a budget shortfall of nearly half a billion dollars.