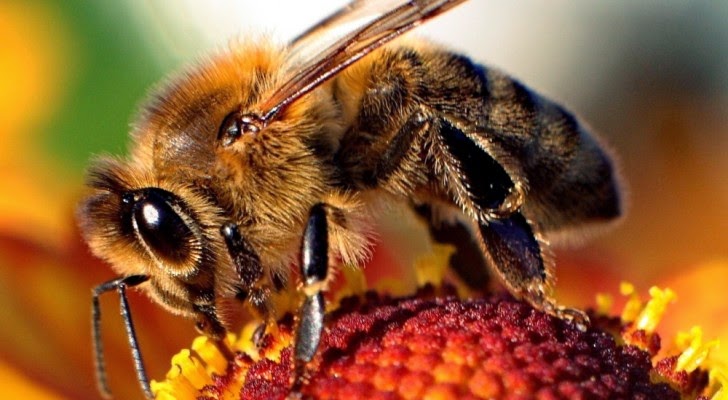 For quite some time, scientists across the world have been warning the public about the decline of bees and other pollinators.

We’ve known for years that bee populations all across North America and Europe are collapsing at an alarming rate.

Our very existence relies on the tiny buzzing creatures, as we explained in Will the Extinction of Bees Really Mean the End of Humanity?

Put bluntly, if all the bees die, humanity will follow.

There is one place where bee populations are growing and flourishing – Amsterdam, the capital city of the Netherlands.

According to a recent report from NBC News, the diversity of wild bee and honeybee species in the Dutch capital has increased by 45 percent since 2000!

The city of 2.3 million people attributes the success to creating bee-friendly environments like the overgrown, sunburnt patch of shrubs that commuters pass by daily.

The installation of “insect hotels” and a ban on the use of chemical pesticides on public land also appear to have played a role.

Geert Timmermans, an ecologist who works for the city, explained that four years ago, Amsterdam set a goal to convert half of all public green spaces to native plants. He added that residents and local businesses are provided with information on how to avoid using pesticides and the use of alternative treatments:

Thoughts From The Precipice

Thoughts From The Precipice

Things are worsening. But we’re not over the edge quite yet.

As you already know, things are unraveling. The narratives of the past are being revealed as false and fraudulent — even harmful.

For example, the fallacy of pursuing “ever more” growth. Growth up to a point is beneficial, but it turns self-destructive when it exceeds what available resources can sustain.

As it is practiced, economic growth as pursued around the world today is now destructive. If we continue on our current trajectory, it will become fatal.

It already has for an increasing scope of the natural world. Beauty is being ruined. The complex web of life is being shredded. Species loss is accelerating.

This kind of damage is essentially permanent.

Right now insect ecologists the world over are utterly horrified by the declines in insect populations. “Crashing” is not too strong of a term.

It’s almost as if the Rapture happened; but instead of humans, it’s the insects who were taken.

A healthy, prudent response by a healthy, prudent culture would be to immediately ban any insecticides suspected of contirbuting to the problem. And to swiftly deploy a serious scientific resources into studying the issue.

Nothing of the sort is happening in the US yet. Few other countries are, either; with the exception of France.  This is really positive news:.

With bees on the endangered list and the terrible consequences that will come to pass if they become extinct, France has taken a drastic step in an attempt to save the population of pollinating insects.

As reported by Organic Consumers, the European nation has decided to ban all five pesticides that scientists believe are responsible for killing bees.

Beyond Honeybees: Pollinator-Friendly Farming for the Future

Beyond Honeybees: Pollinator-Friendly Farming for the Future

Imagine a world without strawberries, apples, chocolate, coffee, squash, or almonds. More than three-quarters of the fruits, vegetables, and nuts we eat rely on pollinators like honeybees. The phenomenon known as Colony Collapse Disorder (CCD) has raised concerns about honeybees over the last decade, and although CCD is no longer the primary worry, honeybee losses continue to rise.

But many other pollinators are also in peril. A timely new report from the United Nationsshows troubling trends that threaten the future of pollinators and our food supply. Human activities are largely responsible—and the solutions are also in our power.

According to the report, pollinators worldwide are being driven to extinction by habitat destruction and degradation, intensive agriculture, pesticide use, pollution, invasive alien species, pathogens, and climate change. In some regions, 40% of invertebrate pollinators, particularly bees and butterflies, are endangered. More than 16% of vertebrate pollinators, like bats and birds, are also threatened.

The UN report’s solutions to the crisis include protecting natural habitats, restoring native vegetation, and planting flower corridors to connect wild areas. Reducing pesticide use and using Integrated Pest Management (IPM) can also increase the abundance and diversity of pollinators. Researchers and farmers in California have been already working together to create diverse landscapes where crucial pollinator populations can thrive. As honeybees face increasing threats, native bees provide new hope for farmers who rely on pollinators for crop production. Since 2009, Frog Hollow Farm, a 143-acre organic fruit farm in Brentwood, has been partnering with the UC Berkeley Urban Bee Lab and the USDA Natural Resource and Conservation Service to promote native bees in agricultural areas.

Bee battles: why our native pollinators are losing the war

As global commerce grows, the movement of goods is occurring at ever-faster rates. And with increased global trade comes the spread of non-native species. This includes invasive insects that are making life difficult for domestic bees.

Non-native species get introduced both intentionally and accidentally. However they migrate, though, their spread can lead to devastating results. Non-native species can dramatically reshape their invaded habitats and disrupt the interactions between native species.

After direct habitat loss, invasive species are the second greatest threat to biodiversity. Biodiversity is crucial to a healthy ecosystem, providing us services such as food, the natural resources that sustain our current lifestyle, and the building blocks of medicines.

Invasive species come in all forms – plants, animals and microbes – but all share common traits: they are non-native, they are increasing in prevalence, and they negatively affect native species.

Native bees in North America are declining drastically. Habitat loss is the number one reason for bee decline, with pesticide use, invasive species, and climate change also playing a major role. With the growth of cities and farms, habitat suitable for our native bees shrinks. And with competition and habitat degradation from invasive species, suitable habitat becomes even less.

We depend on native bees, like our humble bumble bees (Bombus spp.), to pollinate native flowers and crops. Bumble bees pollinate tomatoes, peppers, blueberries and many more of our favorite food items. Honey bees, which are widely used in agriculture and are suffering from colony collapse disorder, are a non-native species, and can’t replace the pollination services provided by native bees such as bumble bees.

But one invasive species in particular is threatening the livelihood of bumble bees.