A Case Study of Fossil-Fuel Depletion

A Case Study of Fossil-Fuel Depletion

A few months ago I received an intriguing email from researcher and activist Regan Boychuk. For the past 15 years, Boychuk has been studying the oil-and-gas industry in Alberta (Canada) and he wanted to know if I would join his project. I immediately said yes.

Some backstory. You can think of Alberta as the Texas of Canada. Alberta is endowed with a vast trove of oil that it has been exploiting for the past 75 years. And like Texas, Alberta’s politics are dominated by the oil industry.

Oh, and Alberta is where I grew up.

Back to Regan Boychuk’s work. Boychuk has a vision for an Alberta in which the oil industry goes extinct by being forced to clean up its own mess. As it stands, Alberta has about 300,000 oil-and-gas wells waiting to be cleaned up at the oil companies’ expense. The problem is that oil companies are not forced to save for the clean-up expense, and accounting tricks allow them to make the clean-up liability look negligible in their corporate accounts.1 It’s an open secret (implicitly endorsed by the Alberta government) that defunct wells will never be cleaned up. If they were, the oil industry would go bankrupt.

And that’s exactly what Boychuk wants. His dream is to kill 3 birds with one stone:

To hasten this big-picture goal, Boychuk asked me to help by estimating production curves for every oil-and-gas well in Alberta. After much head scratching and many lines of code, that’s what I’ve done.

This is the first of three books that the late geologist Kenneth S. Deffeyes, who passed away a year ago this week, wrote about the coming global oil crisis. The goal of these books is to provide readers a rudimentary understanding of oil, where it came from and what’s involved in finding and producing it, in order to raise awareness about the peril we face as oil depletes. All three books deftly achieve this aim courtesy of Deffeyes’ expertise, his gift for communicating science information and his great wit.

Part of what makes the books so accessible is that they’re almost as much autobiographies as textbooks, allowing us to get to know their author personally. Chapter one of Hubbert’s Peak tells of how Deffeyes’ career began at the prestigious Shell Oil research lab in Houston, Texas, in 1958. An oilman through and through, he felt at home in the field; but while at Shell, he met someone whose research persuaded him that the U.S. oil industry didn’t have long to live. The person in question was Marion King Hubbert, a preeminent geoscientist who today is best known for his theory of peak oil. In 1956 Hubbert accurately predicted that U.S. conventional oil production would peak between 1965 and 1970, then begin an irreversible decline. Based on Hubbert’s numbers, Deffeyes concluded that the U.S. oil industry would shrink drastically in coming decades. So, in the late 1960s, he decided to leave the oil business and become a geology professor at Princeton University. In 1997, after teaching there for 30 years, he retired, became an emeritus professor and commenced writing his books about oil. By that time, Hubbert, who had become a close friend of Deffeyes’, had long since passed away. 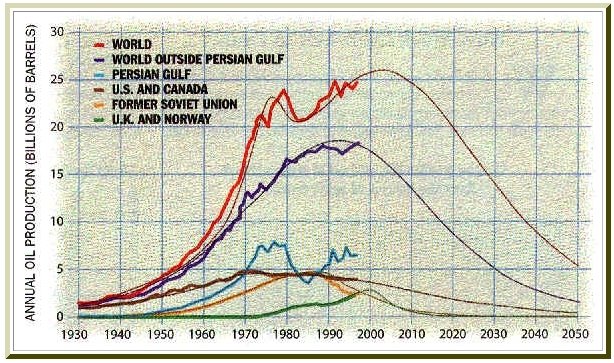 20 years ago, Colin Campbell and Jean Laherrere published an article on “Scientific American” that was to start the second cycle of interest on oil depletion (the first had been started by Hubbert in the 1950s). Their prediction turned out to be too pessimistic, at least in terms of the supply of combustible liquids, still growing today. Yet, it was a valuable warning of things to come, unfortunately ignored by decision-makers worldwide.
The first cycle of interest in oil depletion was started by Marion King Hubbert in the 1950s. Although it provided successful predictions for the production of crude oil in the US, the interest in oil depletion waned in the 1980s. The same destiny of growth and decline awaited the second cycle, that went under the name of “peak oil movement” and that was generated in 1998 by a famous article published by Colin Campbell and Jean Laherrere on “Scientific American.”
Today, the second cycle is winding down and even mentioning the concept of “peak oil” is enough to be branded as a diehard catastrophist, unable to understand how the fracking revolution is leading us to a new age of prosperity under America’s energy dominance. Yet, there are symptoms that the great peak could be finally arriving and – who knows? – a third cycle of interest in oil depletion could be starting.
I published some considerations on this subject in an article that appeared on “Energy Research & Social Science” — it is “open access” and you can find it at this link. After re-examining the story of the peak oil cycle, I conclude that there was no solid reason to reject the peak oil studies, as it was done starting in the mid 2000s. A recent vacation afforded me the opportunity to read The Oracle of Oil, Mason Inman’s excellent new biography of Marion King Hubbert. I strongly recommend it. But, rather than writing a standard book review (which might cover much of the same ground as this one by Frank Kaminski), I’m inspired instead simply to offer a few words in appreciation of Hubbert himself.

Born in Texas in 1903, Hubbert earned his Ph.D. in geology at University of Chicago, then taught at Columbia University. He later worked at Shell’s research laboratory and for the U.S. Geological Survey, and occasionally lectured at Stanford and UC Berkeley. His contributions to geophysics included a mathematical demonstration that rock in the Earth’s crust, because it is under great pressure over large areas, behaves in some ways more like a liquid than a solid. He earned every relevant scientific award short of a Nobel prize, and won lasting fame as the father of “peak oil”—the theory (by now more of an observation) that oil production in any large area will inevitably start from zero, reach one or more high points, and decline back toward zero. (Here is a brief video clipof Hubbert in 1976 explaining the very basics of peak oil).

For years I’ve had a photographic portrait of Hubbert, given to me by his nephew, hanging just above my computer in my home office. I described Hubbert’s best-known accomplishments—his mathematical modeling of oil depletion and his successful forecast of a decline in U.S. petroleum production beginning around 1970—in my 2003 book The Party’s Over, and I have spent most of the last couple of decades reading, writing, and speaking publicly about oil depletion and its consequences, so I could fairly be described as a longstanding Hubbert devotee. After devouring Inman’s meticulously researched and entertainingly written biography, I feel even more indebted to the great man than before.

The Origins of Peak Oil Awareness

The scientific study of peak oil began in the 1950′s, when Shell geophysicist M. King Hubbert reported on the evolution of production rates in oil and gas fields. In a 1956 paper Hubbert suggested that oil production in a particular region would approximate a bell curve, increasing exponentially during the early stages of production before eventually slowing, reaching a peak when approximately half of a field had been extracted, and then going into terminal production decline.

Hubbert calculated a secondary case that if the US oil reserve increased to 200 billion barrels (about which he expressed doubts), peak production would occur in 1970, a delay of five years from his base case. Oil production in the US did in fact peak in 1970, so Hubbert is widely credited with precisely calling the US peak, but few know that he was actually skeptical that the peak would take place as late as 1970.

The US has now surpassed Hubbert’s most optimistic estimate for US oil production. Through 2014, cumulative US production stands at approx. 215 billion barrels, with a remaining estimated proved reserve of 48.5 billion barrels (but with the caveat that this reserves estimate is based on crude prices near $100/bbl).

Hubbert first predicted that U.S. oil production would peak in 1970 and then start declining rapidly. His prediction turned out to be partly true, as U.S. crude oil production peaked that same year, not to be eclipsed again until the shale boom began.

Annual crude oil production (in thousands of barrels per year) for entire United States, with contributions from individual regions as indicated.

“The end of the oil age is in sight, if present trends continue production will peak in 1995 — the deadline for alternative forms of energy that must replace petroleum in the sharp drop-off that follows.” This is what Hubbert had to say in 1974, based on 628 billion barrels of proven oil reserves. However, his prediction didn’t turn out to be true, as global oil production continues to surge, thanks to new oilfield discoveries and improved exploration and drilling technology.