An Eye on M1, Cyclicals, and Junk Bonds: What Matters? 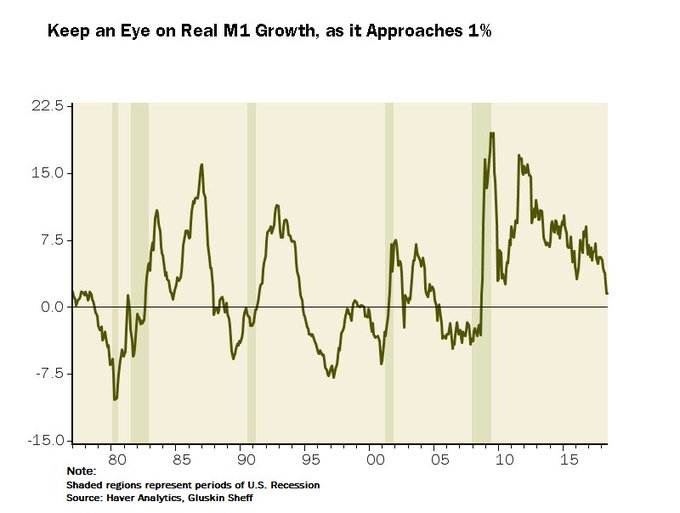 All of the monetary aggregates have slowed substantially, and real M1 growth is flagging a 1% stall-speed growth economy once we get passed all the pre-tariff buying activity and fiscal sugar-high that skewed Q2 GDP.

The problem with this story is that it does not match the hype. Nor does M2.

If we are supposed to keep an eye on M1, it sure is not clear why. The dashed lines above so instances in which M1 growth turned negative and nothing happened for years.

​The chart shows the cyclicals vs. defensives relative performance line against the S&P500. The key point is that cyclicals drove the last leg of the bull market, hence why I say this is basically the market’s Achilles’ heel.

The cyclicals vs. defensives line takes the ratio of the equal weighted performance of cyclicals (materials, industrials, technology) vs. defensives (telecoms, utilities, healthcare). As this line seems to trend during the study period, I have added a linear trend line for analytical purposes (the indicator is stretched vs. trend also).

As you can see on the chart, it’s been the solid performance of cyclicals relative to defensives that drove the last leg of the bull market. The extreme runup in the cyclicals vs. defensives relative performance line can unwind in one of two ways: 1. A bullish rotation: where the S&P 500 heads higher but defensive sectors take the lead; or 2. A bearish rotation: where the S&P 500 undergoes a correction/bear market, and defensives simply fall less than cyclicals.

An Inflation Indicator to Watch, Part 1

“Inflation is always and everywhere a monetary phenomenon.”
—Milton Friedman

Have you ever questioned Milton Friedman’s famous claim about inflation?

Ever heard anyone else question it?

Unless you read obscure stuff written for the academic community, you’re probably not used to Friedman’s quote being challenged. And that’s despite a lousy forecasting record by economists who bought into his Monetarist methods.

When it comes to explaining inflation, Monetarism hasn’t exactly nailed it. Then again, neither has Keynesianism, whose Phillips Curve confounds those who rely on it. You can toss inflation onto the bonfire of major events that mainstream theories fail to explain.

But I’ll argue there might be a better way.

The Global Run On Physical Cash Has Begun: Why It Pays To Panic First

The Global Run On Physical Cash Has Begun: Why It Pays To Panic First

Back in August 2012, when negative interest rates were still merely viewed as sheer monetary lunacy instead of pervasive global monetary reality that has pushed over $6 trillion in global bonds into negative yield territory, the NY Fed mused hypothetically about negative rates and wrote “Be Careful What You Wish For” saying that “if rates go negative, the U.S. Treasury Department’s Bureau of Engraving and Printing will likely be called upon to print a lot more currency as individuals and small businesses substitute cash for at least some of their bank balances.”

Well, maybe not… especially if physical currency is gradually phased out in favor of some digital currency “equivalent” as so many “erudite economists” and corporate media have suggested recently, for the simple reason that in a world of negative rates, physical currency – just like physical gold – provides a convenient loophole to the financial repression of keeping one’s savings in digital form in a bank where said savings are taxed at -0.1%, or -1% or -10% or more per year by a central bank and government both hoping to force consumers to spend instead of save.

For now cash is still legal, and NIRP – while a reality for the banks – has yet to be fully passed on to depositors.

The bigger problem is that in all countries that have launched NIRP, instead of forcing spending precisely the opposite has happened: as we showed last October, when Bank of America looked at savings patterns in European nations with NIRP, instead of facilitating spending, what has happened is precisely the opposite: “as the BIS have highlighted, ultra-low rates may perversely be driving a greater propensity for consumers to save as retirement income becomes more uncertain.”

Breaking Below the Shelf

In our recent missive on junk bonds, we inter alia discussed the fact that the growth rate of the narrow money supply aggregate M1 had declined rather noticeably from its peak in 2011. Here is a link to the chart.

“We also have confirmation of a tightening monetary backdrop from the narrow money supply aggregate M1, the annualized growth rate of which has been immersed in a relentless downtrend since peaking at nearly 25% in 2011. We expect that this trend will turn out to be a a leading indicator for the recently stagnant (but still high at around 8.3% y/y) growth rate in the broad true money supply TMS-2.”

In the meantime the data for TMS-2 have been updated to the end of October, and low and behold, its year-on-year growth rate has declined to the lowest level since November of 2008. At the time Bernankenstein had just begun to print like crazy, via all sorts of acronym-decorated programs (they could have just as well called them “print 1, print 2, print 3”, etc.). So we’re now back to the broad true money supply growth rate recorded at “echo bubble take-off time”.

Annual growth rate of US money TMS-2, breaking below the lower end of the range it has inhabited since late 2013 – click to enlarge.

This is the final piece of the puzzle if it keeps up (and why wouldn’t it keep up?). Stock market internals have become ever more atrocious in the course of this year, which we have regarded as a sign that not enough new money was being printed to keep all the pieces of the bubble in the air at once. Now there is even less support.

In order to understand the relationship between money creation and the price level, we first need to get some definitions straight.

To Austrians the terms inflation and deflation refer to money and not prices. There is no doubt that money has experienced unprecedented inflation. In February of 2010 base money was $2.1 trillion. Four years later it was $3.8 trillion. In the same time frame, M1 has increased from $1.7 trillion to $2.9 trillion. M2 has gone from $8.5 trillion to $11.7 trillion. Excess reserves have doubled from $1.2 trillion to $2.4 trillion. (Please keep in mind that prior to 2008 excess reserves seldom were more than a few BILLION dollars, which is effectively zero and represented mostly the aggregate of excess reserve cash in thousands of community bank vaults.)
To Austrians changes to the price level, what the public incorrectly calls inflation and deflation, are the result of changes to the aggregate demand for consumers’ goods and the aggregate supply of consumers’ goods. Think of a simple ratio with the numerator representing demand and the denominator representing supply. Notice that an increase in supply will cause the price level to fall. Aren’t we all happy with this? I am. Or a decrease in demand will cause the price level to fall. There can be many causes of a decrease in demand–a fall in the money supply due to bank failures, a change in subjective time preference to save more, or a rational desire to hold more cash during times of uncertainty. None of these are bad for the economy per se. Whatever the cause, the antidote to a fall in demand is falling prices. The relationship between supply and demand must be re-established.