Propaganda isn’t just about manufacturing consent for wars and ridiculous governmental measures we’d never normally accept. That’s what most people think of when they hear that word, but there’s so very, very much more to it than that.

The lion’s share of propaganda goes not toward convincing us to accept new agendas of the powerful, but toward keeping us entranced in the status quo dream world which enables the powerful to have power in the first place. Toward normalizing status quo systems and training us to shape ourselves to fit into them like neat little cogs in a well-oiled machine.

And it’s not even a grand, monolithic conspiracy in most cases. The giant corporations who indoctrinate us with their advertisements, their Hollywood movies and shows, their apps, their websites and their news media are all naturally incentivized to point us further and further into delusion by the fact that they benefit from the status quo systems which have elevated them to wealth.

So day in and day out we are presented with media which train us what to value, where to place our interest and attention, what success looks like, and how a normal human behaves on this planet. And it always aligns perfectly with the interests of the rich and powerful.

They don’t just teach us what to believe. They teach us who we are. They give us the frameworks upon which we cast our ambitions and evaluate our success, and we build psychological identities out of those constructs. I am a businessman. I am unemployed. My life is about making money…

A Few Bananas Short of a Bunch

“You’ve been living in a dream world, Neo.” – Morpheus

“How did you go (morally) bankrupt?” Two ways. Gradually, then suddenly.” ― With abject apologies to Ernest Hemingway and his “The Sun Also Rises”

“I reject your reality and substitute my own.” – Adam Savage from Mythbusters

I have this short-on-specifics, long-on-emotion memory of being young, around 9 or 10 years old, and in grade school during the mid 60’s. I was an introvert and thirsty for any knowledge that could help me better understand what to me was nothing less than insanity.

Even back then I instinctively knew the secret, though no one in their ‘right’ mind believed me when I voiced my concern. I was living in an insane asylum, populated by humans reasonably well adapted to close quarters and authoritarian rule. At least that’s the way it was in my house and just about every other home within walking distance.

Of course, the grand global collective, as diverse and culturally mixed as it claimed to be, pretty much followed similar directives. It did then, and in fact still does today. While it may be carefully concealed behind grand consensual governing concepts such as parliamentary rule, democracy or a representative republic, they couldn’t fool me. Whether by closed fist or pointed gun, it was pretty obvious to me the authoritarian few always ruled over the collective many.

I gravitated towards history (which at the time I believed was factual) and dove straight into the deep end head first. The good news was I wasn’t fully and properly indoctrinated yet, so there was a chance my young mind would survive somewhat intact now that some self-awareness was beginning to peek through.

From NFL players ‘taking a knee’ during the national anthem, to preschoolers being brainwashed with the ideology of transgenderism, these left-leaning movements have one goal in mind, and that is to undermine and destroy the foundation of the Western nation state.

This month, the Liberal propaganda machine shifted into overdrive, publicizing yet another divisive scandal to forward their agenda of creating a New World Order.

Atlanta school Principal Lara Zelski clearly did not have her local community in mind when she informed parents and faculty that the morning recital of the pledge of allegiance would be eliminated, substituted with a pledge to “school family, community, country and our global society.”

“Over the past couple of years it has become increasingly obvious that more and more of our community were choosing to not stand and/or recite the pledge,” Zelski said. “There are many emotions around this and we want everyone in our school family to start their day in a positive manner.”

Zelski never reveals any numbers to support what she means by “more and more of our community” who are purportedly snubbing the flag. This is how the proponents of a “global society” move forward with their destructive agenda. Using the Hegelian dialectic, they press some hot-button ‘issue’ – same-sex marriage, unisexual bathrooms, transsexual rights, Civil War statues in the public square, marijuana use, you name it – that is guaranteed to pit America’s two primary political ideologies fiercely against each other. Then they sit back and watch the fireworks display of their creation. 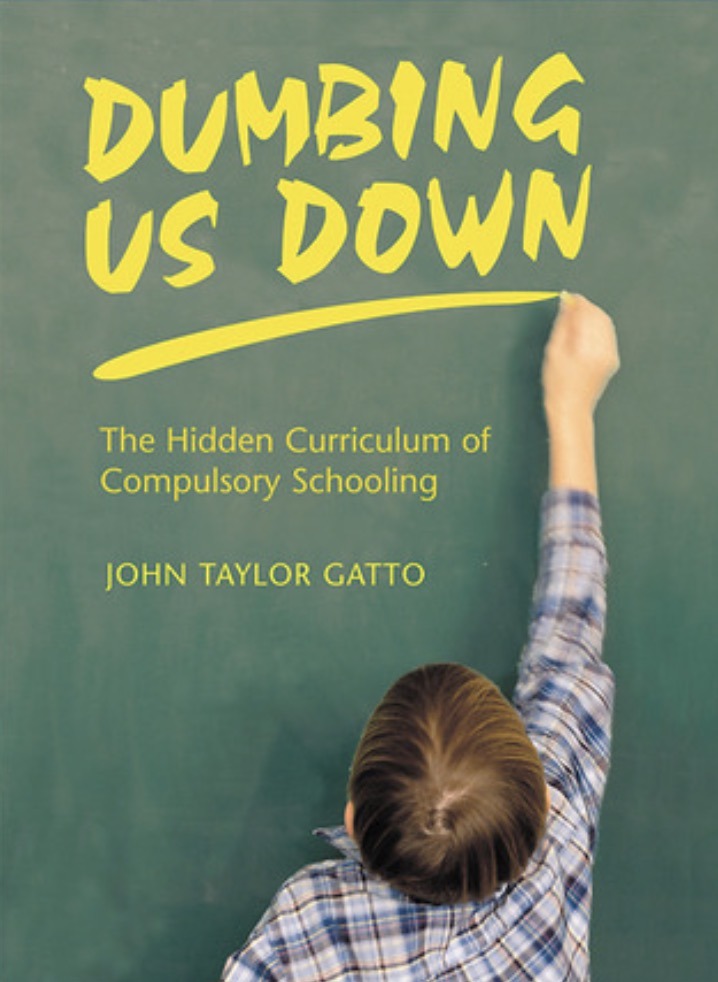 Education consists mainly of what we have unlearned.
– Mark Twain

As a father of two young children, my thoughts have increasingly started to center around their young lives and the future world they’ll inhabit. Such considerations quickly lead to stressful questions such as, what are the best schools in the area? Which option can provide the best environment in which to thrive? If the best options aren’t public, can we afford them? Is it worth the money? All these questions and more have filled the minds of my wife and I over the past couple of years, but lately we’ve started to ask even bigger questions; such as whether the compulsory education system as it exists in the U.S. in 2017 makes any sense in the first place. I’m increasingly starting to conclude that it doesn’t.

Before I get into that, let’s take a step back. A lot of what I do here at Liberty Blitzkrieg is highlight what’s perverse and destructive about human behavior at this time, and how things can be made dramatically better in the future. If I had to summarize my worldview concisely, I’d state that human beings at the moment are living under highly centralized, hierarchical power structures which are gamed by unethical, greedy and corrupt people at the top who exploit the masses ruthlessly.

Since the worst of humanity will always work hardest and most violently to attain power (this will always be the case), the only way to achieve lasting, positive change is to systemically move to a different model for human activity. Trying to get decent people at the top of a highly centralized power structure is counterproductive and merely a short-term solution if it can even be achieved in the first place.

“The indoctrination effect, regarding the individual, is to make him think he no longer has an independent existence. Those who still have functioning minds are taught that ‘the individual’ was a concept that had a use at an earlier stage of evolution, when modern systems and structures were still developing—but ‘individual’ became an accurate synonym for ‘criminal’ when benign super-government took over…”(The Underground, Jon Rappoport)

October 2, 2071, the Center of Centers, United Europe. Citizen G1435-X was brought into a secret conference room in the Department of Re-Education, Special Branch.

His interviewer held the title of Mental Health Representative of the People Level 14, or MHR. This is an excerpt from their conversation:

MHR: Are you aware of the size of the United Europe Government?

Citizen: I know that almost everyone I meet works for the Government in some capacity.

MHR: If you include corporations, which of course are in partnership with Government on many levels, the figure approaches eighty percent of the population.

Citizen: And there are the computers and robots, too.

MHR: The correct name is Machines for the Illumination of Everyone.

Citizen: What do you want from me?

MHR: That’s the whole point. There is no you.

Citizen: How can that be true? I’m sitting here.

MHR: No, that is an illusion. For convenience sake, an assumption is being made: ‘I am I and you are you.’ It facilitates this conversation. But in truth, we are one. We are in accord. We know the same knowing.

MHR: It would sound like gibberish to a disaffected part of the whole. A disaffected part, which is ‘you,’ simply needs to surrender. Then you will cease to be a diseased illusory series of thoughts.

MHR: Of course. The culmination of all Government is the shared cosmic body. Another term for it is Universe.