In the more conspiratorial corners of the Internet, the “Great Reset” is a sinister public face of an elite plan to enslave humanity by creating a global authoritarian surveillance super-state, compete with re-education camps for those who suffer from wrongthink, and Soylent Green-style euthanasia camps for addressing the twin problems of overpopulation and an aging society.  Tracing its origins via Agenda 21, the Project for the New American Century back to the unpleasant recommendations from the Club of Rome’s Limits to Growth project in the early 1970s, the Great Reset is about securing the power and privilege of the technocratic elite in the devastating aftermath of the global pandemic.

It doesn’t help that Klaus Schwab, the co-author of the book Covid-19: The Great Reset, needs only a white cat on his lap to look for all the world like the villain in the next Bond movie.  In reality though, Schwab is a mediocre German social democrat (i.e. neoliberal) who has little understanding of the crisis unfolding around him, and who – along with the rest of the Davos crowd – is simply whistling in the dark to mask his own fears.

Far from being a masterplan for subjugating humanity, Covid-19: The Great Reset simply builds upon Schwab’s earlier and equally detached The Fourth Industrial Revolution.  As I wrote in response to that book four years ago:

“The courtiers of the modern corporate elite also danced in their version of Versailles at Davos in Switzerland.  Initially, they were emotionally deflated.  None knew why stock markets were tumbling, oil and commodity prices were crashing, the Chinese engine of growth was seized, and zero percent interest rates and quantitative easing had failed.  For a brief moment, they peered into the abyss of their own destruction.  Within the week, however, the courtiers regained their energy and confidence… technology was going to save the day after all.

The “Great Reset” And The Risk Of Greater Interventionism

Global debt is expected to soar to a record $277 trillion by the end of the year, according to the Institute of International Finance. Developed markets’ total debt -government, corporate and households- jumped to 432% of GDP in the third quarter. Emerging market debt-to-GDP hit nearly 250% in the third quarter, with China reaching 335%, and for the year the ratio is expected to reach about 365% of global GDP. Most of this massive increase of $15 trillion in one year comes from government and corporates’ response to the pandemic. However, we must remember that the total debt figure already reached record-highs in 2019 before any pandemic and in a period of growth.

The main problem is that most of this debt is unproductive debt. Governments are using the unprecedented fiscal space to perpetuate bloated current spending, which generates no real economic return, so the likely outcome will be that debt will continue to rise after the pandemic crisis is ended and that the level of growth and productivity achieved will not be enough to reduce the financial burden on public accounts.

In this context, The World Economic Forum has presented a roadmap for what has been called “The Great Reset”. It is a plan that aims to take the current opportunity to “to shape an economic recovery and the future direction of global relations, economies, and priorities”. According to the World Economic Forum, the world must also adapt to the current reality by “directing the market to fairer results, ensure investments are aimed at mutual progress including accelerating ecologically friendly investments, and to start a fourth industrial revolution, creating digital economic and public infrastructure”. These objectives are obviously shared by all of us, and the reality shows that the private sector is already implementing these ideas, as we see technology, renewable investments and sustainability plans thriving all over the world.

Can we afford the energy demands of “the fourth industrial revolution”? Don’t ask.

Are you wishing you could be at Davos, Switzerland this week, taking in the stimulating and deeply insightful discussions on the theme “The Fourth Industrial Revolution”? If so, reading the pre-conference book of the same name may leave you reassured that you aren’t actually missing much.

Klaus Schwab, founder and executive chairman of the World Economic Forum, released his Kindle book The Fourth Industrial Revolution just a few days ago, providing a free copy to Davos attendees. (That way they needn’t stretch their expense accounts to cover the $9.91 Kindle fee that the rest of us must pay.)

Schwab has doctorates in economics and engineering, plus a master’s in public administration from Harvard. And he says that The Fourth Industrial Revolution is “a crowd-sourced book, the product of the collective enlightened wisdom of the Forum’s communities.” If credentials alone would create a good book, this would be a humdinger. 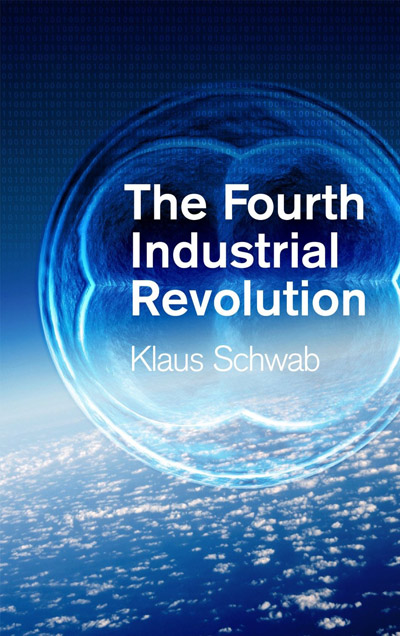 What is the Fourth Industrial Revolution? In Schwab’s words,

today we are at the beginning of a fourth industrial revolution. It began at the turn of this century and builds on the digital revolution. It is characterized by a much more ubiquitous and mobile internet, by smaller and more powerful sensors that have become cheaper, and by artificial intelligence and machine learning.

Elsewhere he also throws genetic engineering and the editing of genomes into the mix.

While noting that billions of people have yet to “fully experience” the second and third industrial revolutions, Schwab believes that “the fourth industrial revolution will be every bit as powerful, impactful and historically important as the previous three.” In his view it’s not just likely but inevitable that “major technological innovations are on the brink of fuelling momentous change throughout the world.”