The FBI Can Access Your Personal Data in 15 Minutes

The FBI Can Access Your Personal Data in 15 Minutes 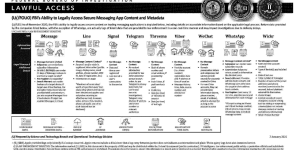 The Federal Bureau of Investigations (FBI) can legally access your “secure messaging app content,” according to a new report by The Epoch Times.  In fact, it would only take officers about 15 minutes to access the contents of iMessages to collect metadata from WhatsApp. Our phones and personal electronic devices can provide agents with our location, contacts, pictures, search history, and more. Numerous people believe that encryption is one-dimensional and their messages are secure.

There are different forms of encryption and ways to bypass poorly encrypted software. People believed iMessage was secure due to Apple’s encryption, but automatic cloud backups are not encrypted and can be accessed. WhatsApp only began offering encryption backup in September, and the feature is not the default setting. The FBI document noted that search warrants could provide them with backup encryption keys as well.

Signal, Telegram, and WeChat are a bit more secure, but the FBI can still determine data logs or when the user logged into the service. Some may shrug and say they have nothing to hide and, therefore, nothing to fear. The problem is that the government can and will twist any information provided to them in order to win or develop a court case. Also, the FBI is not a beacon of ethics, and no one wants to have their personal information publicized. Since the majority of the world is not a threat to national security or a predator, sharing this much information with the government without a subpoena is asinine. All it would take is 15 minutes for someone’s private life to become public government information.

The Loss of All Liberty Is Coming Faster Than You Imagined

UK Prime Minister David Cameron reflects the serious problem we have with politicians. Politicians have ZERO respect for our human rights for they only think about how they are going to raid our wealth to pay for their families and retirements at our expense. Cameron actually asked, “In our country, do we want to allow a means of communication we cannot read? My answer to that question is: ‘No, we must not’.”

These people are highly dangerous. They only see government as the solution and do not grasp that we have rights. Government wants to eliminate all encryption because they are hunting money. You have a 1000 times greater chance of dying in a car crash than by a terrorist. They use terrorism as the great excuse to collect everything we do.

How did the world function before the internet? Did they intercept every letter in the mail or record every phone call? Why is it that with the internet these people feel they have a right to listen and read everything we communicate? This is EXACTLY the same paranoia displayed by Stalin. Human rights do not simply vanish because we have entered the internet age. We still have rights that governments need to respect, but refuse because they are always desperately in need of more taxes to pay their bankers. The OECD has stated, “Co-operation between tax administrations is critical in the fight against tax evasion and a key aspect of that co-operation is exchange of information.” It’s all about money any nothing else.

In 2010, the U.S. enacted legislation known as FATCA (Foreign Account Tax Compliance Act), which is destroying the world economy and lowering economic growth globally. Effectively, FATCA requires foreign financial institutions around the globe to report account details of their U.S. customers to the U.S. tax administration.

FBI says that citizens should have no secrets that the government can’t access: the Orwellian cyber police state has arrived

FBI says that citizens should have no secrets that the government can’t access: the Orwellian cyber police state has arrived

The police and surveillance state predicted in the forward-looking 1940s classic “1984” by George Orwell, has slowly, but steadily, come to fruition. However, like a frog sitting idly in a pan of steadily-warming water, too many Americans still seem unaware that the slow boil of big government is killing their constitutional liberties.

The latest sign of this stealth takeover of civil rights and freedom was epitomized in recent Senate testimony by FBI Director James Comey, who voiced his objections to civilian use of encryption to protect personal data – information the government has no automatic right to obtain.

As reported by The New American, Comey testified that he believes the government’s spy and law enforcement agencies should have unfettered access to everything Americans may store or send in electronic format: On computer hard drives, in so-called i-clouds, in email and in text messaging – for our own safety and protection. Like many in government today, Comey believes that national security is more important than constitutional privacy protections or, apparently, due process. After all, aren’t criminals the only ones who really have anything to hide?

In testimony before a hearing of the Senate Judiciary Committee entitled “Going Dark: Encryption, Technology, and the Balance Between Public Safety and Privacy” Comey said that in order to stay one step ahead of terrorists, as well as international and domestic criminals, Uncle Sam’s various spy and law enforcement agencies should have access to available technology used to de-encrypt protected data. Also, he believes the government should be the final arbiter deciding when decryption is necessary.

What could go wrong there?

Find more articles on the police state at PoliceState.news

RESEARCHERS WORKING with the Central Intelligence Agency have conducted a multi-year, sustained effort to break the security of Apple’s iPhones and iPads, according to top-secret documents obtained byThe Intercept.

The security researchers presented their latest tactics and achievements at a secret annual gathering, called the “Jamboree,” where attendees discussed strategies for exploiting security flaws in household and commercial electronics. The conferences have spanned nearly a decade, with the first CIA-sponsored meeting taking place a year before the first iPhone was released.

By targeting essential security keys used to encrypt data stored on Apple’s devices, the researchers have sought to thwart the company’s attempts to provide mobile security to hundreds of millions of Apple customers across the globe. Studying both “physical” and “non-invasive” techniques, U.S. government-sponsored research has been aimed at discovering ways to decrypt and ultimately penetrate Apple’s encrypted firmware. This could enable spies to plant malicious code on Apple devices and seek out potential vulnerabilities in other parts of the iPhone and iPad currently masked by encryption.

The security researchers also claimed they had created a modified version of Apple’s proprietary software development tool, Xcode, which could sneak surveillance backdoors into any apps or programs created using the tool. Xcode, which is distributed by Apple to hundreds of thousands of developers, is used to create apps that are sold through Apple’s App Store.

By Demanding Backdoors to Encryption, U.S. Government is Undermining Global Freedom and Security

By Demanding Backdoors to Encryption, U.S. Government is Undermining Global Freedom and Security

One of the biggest debates happening at the intersection of technology and privacy at the moment revolves around the U.S. government’s fear that the American peasantry may gain access to strong encryption in order to protect their private communications. Naturally, this isn’t something Big Brother wants to see, and the “solution” proposed by the status quo revolves around forcing technology companies to provide a way for the state to have access to all secure communications when they deem it necessary.

Many technology experts have come out strongly against this plan. Leaving aside the potential civil liberties implications of giving the lawless maniacs in political control such power, there’s the notion that if you create access for one group of entitled people, you weaken overall security. Not to mention the fact that if the U.S. claims the right to such privileged access, all other countries will demand the same in return, thus undermining global privacy rights and technology safeguards.

We are already seeing this play out in embarrassing fashion. Once again highlighting American hypocrisy and shortsightedness, as well as demonstrating that the U.S. government does’t actually stand for anything, other than the notion that “might means right.” Sad.

When the US demands technology companies install backdoors for law enforcement, it’s okay. But when China demands the same, it’s a whole different story.