Daniel McAdams: “The US Has Ceased Being a Republic and Has Become a National Security State”

Daniel McAdams: “The US Has Ceased Being a Republic and Has Become a National Security State”

Daniel McAdams: In August I was watching a segment of the Sean Hannity program while at a friend’s house and noticed that despite an hour of Hannity ranting against the “deep state” in the US, he was wearing a lapel pin bearing the seal of the US Central Intelligence agency, which most would agree is either the center or at least an important hub of the US “deep state” itself. I tweeted about this strange anomaly and as a comment to my own Tweet on it I happened to say that Hannity is “retarded.” Twitter informed me that I had committed “hateful conduct” for “promoting violence against or directly attacking or threatening other people on the basis of race, ethnicity, national origin, sexual orientation, gender, gender identity, religious affiliation, age, disability, or disease.” It is clear on its face that I did none of these. I used a non-politically correct term to ridicule Hannity for attacking the “deep state” while wearing the symbols of the deep state on his very lapel.

It is clear that Twitter is deeply biased against any voices outside the mainstream, pro-empire perspective. As a leading Tweeter in opposition to interventionist US foreign policy, I had long been targeted by those who enable and enforce Twitter’s political biases. Look at who Twitter partners with and you will understand why I was banned for a transparently false reason: the US government-funded Atlantic Council and other similar organizations are working with Twitter to eliminate any voices challenging US global military empire.

In your opinion, what exactly is the role of the CIA in the regime changes of some countries around the world?

Daniel McAdams, the Executive Director of the Ron Paul Institute for Peace and Prosperity, was banned from Twitter last week. Officially, it was because he used the word “retarded” to describe the odious establishment propagandist Sean Hannity after noting the hilarious fact that the Fox News host had been wearing a CIA lapel pin while “challenging the deep state”. Unofficially, it was because McAdams has been operating for years at the apex of one of the most effective antiwar movements in the United States.

An article from Liberty Conservative News about McAdams’ encounter with the business end of the Twitter censorship hammer reports that the outspoken foreign policy critic received a notification that his account “has been suspended and will not be restored because it was found to be violating Twitter’s Terms of Service, specifically the Twitter Rules against hateful conduct.”

“It is against our rules to promote violence against or directly attack or threaten other people on the basis of race, ethnicity, national origin, sexual orientation, gender, gender identity, religious affiliation, age, disability, or disease,” the notification reads. “Additionally, if we determine that the primary purpose of an account is to incite harm towards others on the basis of these categories, that account may be suspended without prior warning.”

Now, unless Sean Hannity does in fact have some literal mental handicap we don’t know about, it’s not accurate to say that he was attacked or threatened on that or any other basis; rather, he was merely insulted with a common pejorative that is not widely considered to be politically correct. It is also certainly not accurate to say that the primary purpose of McAdams’ now-defunct Twitter account was to incite harm toward others based on the aforementioned categories.

“I Oppose Interventionism, But-” But Nothing. Stop Being A Pro Bono CIA Propagandist.

“I Oppose Interventionism, But-” But Nothing. Stop Being A Pro Bono CIA Propagandist.

In a recent interview with The Corbett Report, the Ron Paul Institute‘s Daniel McAdams spoke disdainfully of those ostensibly anti-interventionist libertarians who picked this moment of all times to loudly and aggressively condemn Venezuela’s president Maduro, just as the US power establishment is ramping up its campaign to topple the Venezuelan government.

“All of a sudden now there are millions of Venezuela experts in America, and many of them could not point Venezuela out on a map five days ago,” McAdams said. “And everyone has to have this disclaimer, ‘Well, I know it’s probably worse than North Korea, but the US government shouldn’t get involved.’ It’s cowardice, because once the war starts, they can say ‘Hey I never called for US intervention!’ No, but you’re a conveyor belt for propaganda. You’re a conveyor belt to get the machine ginned up for war. And so you’ve got to stand up and take responsibility.”

McAdams has for years consistently operated in the hub of one of America’s most forceful and effective branches of opposition to US interventionism, and he is absolutely correct here. On both sides of America’s political divide, the primary objections you will see to this administration’s campaign to delegitimize and topple the Venezuelan government are prefaced with a strong condemnation of Maduro followed by some feeble equivocations voicing vague objections to Trump’s actions, if that.

Even more often, what you will see is excuses made for the US government’s aggressive attempts to control who runs Venezuela, followed by some mumbling along the lines of “I don’t want us to go to war, though” dribbling out of the corner of their mouths.

The mainstream press coverage of President Trump’s announcement that he would be removing US troops from Syria has been unanimously apocalyptic. Journos who until a few days ago couldn’t care less about the Kurds (certainly not when US president after US president has used them as a cat’s paw and then abandoned them to their fate), were all of a sudden up in arms warning about an impending slaughter with the blood dripping squarely onto Trump’s hands.

In fact, US weapons, training, and backing had carved out a de facto super-sized Kurd-controlled section of northern Syria which it does not take a geopolitical expert to understand would incense NATO ally Turkey. Why prop up the Kurds and in the process infuriate Erdogan? The US-led regime-change program simply did not have many other boots on the ground to turn to. After years of arming jihadists whose masks slipped quickly thereafter to reveal al-Qaeda or ISIS markings, the game was up for the “Assad must go” crowd and the only move left was to pretend that a proxy Kurd militia was something called the “Syrian Democratic Forces.” When in fact it was nothing of the sort. It was simply the Kurds, rented by Washington.

And the bloodbath the media and neocons warned would come about should Trump dare reconsider another US forever war? More lies and bluster. The Kurds are re-considering their foolish refusal to partner more closely with the Syrian government against foreign-sponsored insurgencies. Just last week, they began negotiations with Damascus to reconcile and forestall a massive Turk incursion.

…click on the above link to read the rest of the article.. 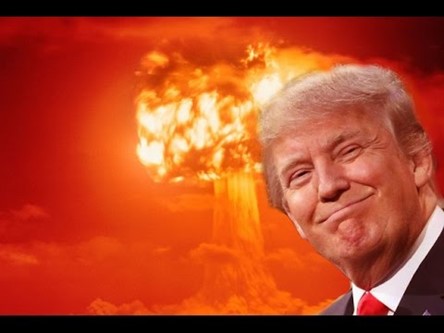 Today President Trump announced that he was canceling US participation in the Joint Comprehensive Plan of Action (JPCOA) otherwise known as the Iran nuclear deal. The president’s assertions were ludicrous and factually incorrect, but the neocons who were no doubt behind the speech have never been all that wedded to the truth. It became obvious fairly on that Trump’s rationale was not to be taken seriously, when he cited last week’s comical stage performance by Israeli prime minister Benjamin Netanyahu that “Iran Lied” about its nuclear program.

Netanyahu’s fairy tale required us to believe that the Iranians were storing their most sensitive national security (paper) documents and compact discs in an unguarded desert hut, which the crack Israeli team of intelligence operatives were able to discover and remove by the truckload right under the noses of what they claim is among the most totalitarian “regimes” on earth.

And even if one believes that fairy tale, one is required to suspend logic and reason and conclude that evidence that Iran was pursuing nuclear weapons technology but had halted the program by 2003 is actually proof that Iran is currently pursuing nuclear weapons capabilities — despite repeated inspections that have concluded otherwise. Really, it’s something a child could see through. Which is perhaps why the neocons were so successful at packaging it for Trump’s consumption.

Likewise Trump’s claim that Iran is the world’s leading sponsor of terrorism…for among other things fighting actual terrorists (al-Qaeda and ISIS) in Syria at the invitation of the Syrian government!

A Russian pilot has been killed by US-armed terrorists in Syria. The Ron Paul Institute‘s Daniel McAdams writes the following about this new development:

“The scenario where a US-backed, US-supplied jihadist group in Syria uses US weapons to shoot down a Russian plane and then murders the pilot on the ground should be seen as a near-nightmare escalation, drawing the US and Russia terrifyingly closer to direct conflict.”

McAdams is not fearmongering; he is stating a plainly obvious fact. The Trump administration has just announced that it is restructuring its nuclear weapons policy to take a more aggressive stance toward Russia than that which was held by the previous administration. This is coming after this administration’s decision to arm Ukraine against Russia, a move Obama refused to take for fear of escalating tensions with Moscow, as well as its decision to continue to occupy Syria in order to effect regime change, along with numerous other escalations. The Council on Foreign Relations, which is without exaggeration as close to the voice of the US establishment as you can possibly get, is now openly admitting that the “United States is currently in a second Cold War with Russia.”

In a recent interview with The Real News, leading US-Russian relations expert Stephen Cohen repeated his ongoing warning that “this new Cold War is much more dangerous, much more likely to end in Hot War, than was the 40-year of Cold War, which we barely survived.” In a previous interviewwith the same outlet, Cohen elaborated more extensively: