Regime change, not disarmament, was always the driving factor behind U.S. policy towards Saddam Hussein. Powell knew this because he helped craft the original policy.

The New York Times Magazine has published a puff piece soft-peddling former Secretary of State Colin Powell’s role in selling a war on Iraq to the UN Security Council using what turned out to be bad intelligence. “Colin Powell Still Wants Answers” is the title of the article, written by Robert Draper. “The analysts who provided the intelligence,” a sub-header to the article declares, “now say it was doubted inside the CIA at the time.”

Draper’s article is an extract from a book, To Start a War: How the Bush Administration Took America into Iraq, scheduled for publication later this month. In the interest of full disclosure, I was approached by Draper in 2018 about his interest in writing this book, and I agreed to be interviewed as part of his research. I have not yet read the book, but can note that, based upon the tone and content of his New York Times Magazine article, my words apparently carried little weight.

I spent some time articulating to Draper my contention that the issue with Saddam Hussein’s Iraq was never about weapons of mass destruction (WMD), but rather regime change, and that everything had to be viewed in the light of this reality—including Powell’s Feb. 5, 2003 presentation before the UN Security Council. Based upon the content of his article, I might as well have been talking to a brick wall.

The anti-neoconservative Colonel Lawrence Wilkerson, who had been the chief aide to U.S. Secretary of State Colin Powell and had opposed America’s invading Iraq, spoke on March 2nd explaining how the U.S. and Russia are drifting ever-more-rapidly into World War III. He said it’s essentially the same way that England and Germany drifted into WW I: being sucked in by their entangling web of foreign alliances. However, as he sees it, the role that Sarajevo played to spark world-war in 1914, is being performed this time by Israel. Instead of the Bosnian Serb Gavrilo Princip igniting the war by assassinating in Sarajevo the Archduke Ferdinand of Austria, Benjamin Netanyahu is igniting this war throughout the Middle East, by escalating his campaign to conquer Shiites in Iran, Syria, and Lebanon — overthrowing and replacing the governments there (which would then become controlled by allies of the anti-Shiite Sunni regime in U.S.-Israel-allied Saudi Arabia), and also aiming ultimately to expand Israel itself, to take over Jordan so as to confirm biblical prophesy.

And, as Wilkerson sees it, Netanyahu is also fronting for the Saud family: the Israel lobby is fronting not only for Israel’s aristocracy, but for Saudi Arabia’s. (Whereas Israel works both inside and outside the U.S. Government to control the U.S. Government, the Sauds, which are the world’s richest family, work only inside the U.S. Government, by outright buying it; so, unlike the Jewish billionaires who control Israel, they don’t need acceptance by the American people; and each time the Sauds try, they fail at it.) However, since Wilkerson’s speech was being sponsored by organizations that oppose Israel’s lobbyists, most of it dealt with Israel’s side of the Israel-Saud alliance that controls U.S. foreign policies (especially in the Middle East). (The U.S. aristocracy’s hostility toward Russia is, however, its own; it is primary for America’s billionaires, but not for Israel’s aristocracy, and also not for the Sauds — both of which aristocracies are instead focused mainly against Iran and Shiites.) 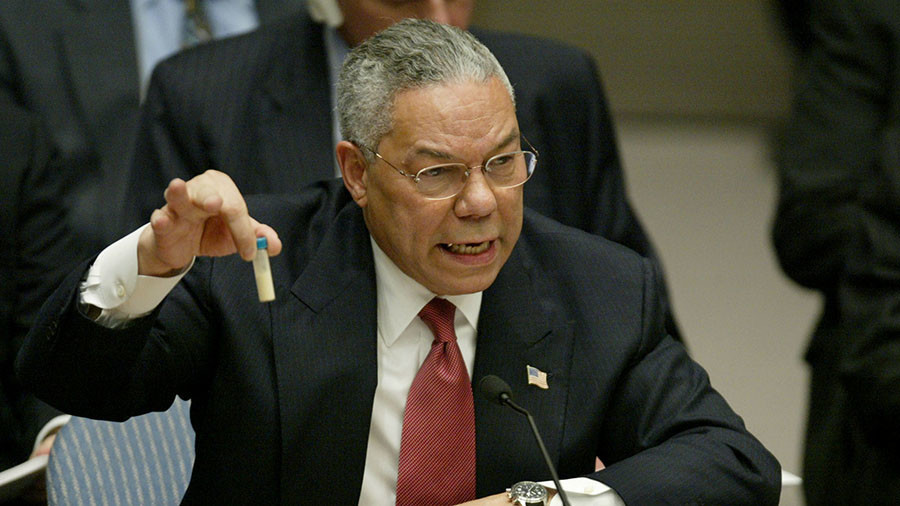 Colin Powell holds up a vial that he described as one that could contain anthrax, during his presentation on Iraq to the U.N. Security Council, Feb. 5, 2003. © Ray Stubblebine / Reuters
Western society is flirting with a disturbing trend where people are being denied the time-honored ‘presumption of innocence’. The same undemocratic method is even being used against nations in what is becoming a dangerous game.

Imagine the following scenario: You are a star football player at the local high school, with a number of college teams hoping to recruit you. There is even talk of a NFL career down the road. Then, overnight, your life takes an unexpected turn for the worse. The police show up at your house with a warrant for your arrest; the charges: kidnapping and rape. The only evidence is your word against the accuser’s. After spending six years behind bars, the court decides you were wrongly accused.

That is the incredible story of Brian Banks, 26, who was released early from prison in 2012 after his accuser, Wanetta Gibson, admitted that she had fabricated injurious claims against the young man.

Many other innocent people, however, who have been falsely accused in the West for some crime they did not commit, are not as fortunate as Brian Banks. Just this week, for example, Ross Bullock was released from his private “hell” – and not due to an accuser with a guilty conscience, but by committing suicide.

“After a ‘year of torment’… Bullock hanged himself in the garage of the family home, leaving a note revealing he had ‘hit rock bottom’ and that with his death ‘I’m free from this living hell,’” the Daily Mail reported.

There is a temptation to explain away such tragic cases as isolated anomalies in an otherwise sound-functioning legal system. After all, mistakes are going to happen regardless of the safeguards. At the same time, however, there is an irresistible urge among humans to believe those people who claim to have been victimized – even when the evidence suggests otherwise. Perhaps this is due to the powerful emotional element that works to galvanize the victim’s story. Or it could be due to the belief that nobody would intentionally and unjustly condemn another human being. But who can really say what is inside another person’s heart? Moreover, it can’t be denied that every time we attempt to hunt down and punish another people, tribe, sex, religion, etc. for some alleged crimes against victims, there is a real tendency among Westerners to get carried away with moralistic zeal to the point of fanaticism.

Man Who Sold America the Iraq War Just Warned Iran Is Next, but Is Anyone Listening?

Man Who Sold America the Iraq War Just Warned Iran Is Next, but Is Anyone Listening?

(ANTIMEDIA) — Fifteen years after the calamitous U.S. invasion of Iraq, an architect of the propaganda used to drum up support for the war is warning that it’s happening again — this time with Iran.

Lawrence Wilkerson, who was chief of staff to former Secretary of State Colin Powell, helped the then-secretary “paint a clear picture that war was the only choice” in his infamous 2003 speech to the U.N. This week, writing for the New York Times — an outlet that, at the time, parroted misleading narratives in support of the war — Wilkerson accused the Trump administration of manipulating evidence and fear-mongering in the same way the Bush administration did to cultivate public support for ousting Saddam Hussein.

In his Monday op-ed, titled “ I Helped Sell the False Choice of War Once. It’s Happening Again,” he wrote:

Though the U.N. and much of the world didn’t buy it, Wilkerson says Americans did, and it amounted to the culmination of a two-year effort by the Bush administration to initiate the war, which he now condemns.

“That effort led to a war of choice with Iraq — one that resulted in catastrophic losses for the region and the United States-led coalition, and that destabilized the entire Middle East,” he wrote, going on to call out the Trump administration for pushing the United States down the same path in Iran.

Lie After Lie: What Colin Powell Knew About Iraq 15 Years Ago and What He Told the U.N. LIE AFTER LIE: WHAT COLIN POWELL KNEW ABOUT IRAQ 15 YEARS AGO AND WHAT HE TOLD THE U.N.

COLIN POWELL DELIVERED his presentation making the case for war with Iraq at the United Nations 15 years ago, on February 5, 2003.

As much criticism as Powell received for this — he’s called it “painful” and something that will “always be a part of my record” — it hasn’t been close to what’s justified. Powell, who was secretary of state under President George W. Bush, was much more than just horribly mistaken: He fabricated “evidence” and ignored repeated warnings that what he was saying was false.

Unfortunately, Congress never investigated Powell’s use of the intelligence he was given, so we don’t know many of the specifics. Even so, what did reach the public record in other ways is extremely damning. While the corporate media has never taken a close look at this record, we can go through Powell’s presentation line by line to demonstrate the chasm between what he knew and what he told the world. As you’ll see, there’s quite a lot to say about it.

Powell’s speech can be found on the State Department website here. All other sources are linked below.

On that February 5 in front of the U.N. Security Council, was Colin Powell certain what he was saying was accurate? He certainly was:

POWELL: My colleagues, every statement I make today is backed up by sources, solid sources. These are not assertions. What we’re giving you are facts and conclusions based on solid intelligence.

Later, regarding whether Iraq had reconstituted a nuclear weapons program, he said:

POWELL: There is no doubt in my mind …

While the media has been mostly obsessing over the recently leaked Colin Powell emails that discuss either Hillary Clinton, Bill Clinton, or Donald Trump, a just as important, from a geopolitical perspective, email was revealed by the DCLeaks website, in which the former Secretary of State admits that Israel as 200 nuclear weapons “all targeted” at Iran, so Iran can’t use one even if “they finally make one.” Powell’s assessment of Iran’s nuclear capacity comes two weeks after it was revealed that the Obama administration had granted Iran “Secret” nuclear deal exemptions, despite claiming otherwise.

More importantly, however, the email to Jeffrey Leeds, Powell’s business associate and major Democratic donor, finally provided the admission that Israel had nuclear weapons, something the biggest US ally in the Middle East has carefully avoided confirming or denying for years, in a policy dubbed “nuclear ambiguity.”

In the Leeds email dated March 3, 2015, Powell writes that “Iranians can’t use [a nuke] if they finally make one,” in the context of the ongoing talks about Tehran’s nuclear program. “The boys in Tehran know Israel has 200, all targeted on Tehran, and we have thousands. As [Iranian President Mahmoudin Ahmedinejad said], ‘What would we do with one, polish it?’ I have spoken publicly about both [North Korea] and Iran. We’ll blow up the only thing they care about—regime survival. Where, how would they even test one?”

The email was sent shortly after Israeli Prime Minister Benjamin Netanyahu had just visited Washington amid deteriorating relations with the Obama administration, and had given a fiery speech before Congress denouncing the proposed deal under which Iran would consent to invasive inspections in exchange for lifting of the nuclear-related sanctions. The deal was finalized in July 2015, despite much ongoing criticism by both Republicans and Donald Trump who has threatened to undo the deal if elected president.