Bloomberg’s update in the wake of the week-long Deer Park oil processing plant fire (now extinguished) and chemical spill holds nothing back, but underscores the seriousness of the situation after both city and Intercontinental Terminals Co. (ITC) previously sought to reassure residents days ago that “everything’s fine”.

Instead, as Bloomberg’s aptly titled headline reads, “Cloud of Cancer-Causing Chemical Hangs Over the Houston Channel” — this as hundreds of area residents have sought medical help for illnesses ranging from nausea to headaches to irritation and burning in the skin, eyes, nose and throat.Prior photo showing a black plume that had stretched for 20 miles from the petrochemical fire at the Intercontinental Terminals Company, Monday, March 18, 2019, in Deer Park, Texas. via AP

For many days running the nation was captivated by dramatic images of flames and smoke plumes hovering above the Houston area from the Deer Park petrochemical fire, which had initially triggered an emergency shelter-in-place order from city authorities when it began last Sunday March 17; and while firefighters had extinguished the raging inferno on Thursday, multiple chemical tanks reignited again late Friday, complicating efforts to clean up a massive chemical spill into the nearby Houston Ship Channel.

With the fire now extinguished, Houston and Harris County area residents, especially those closest to Deer Park, are now concerned over dangerous levels of exposure to the chemical tanks which had burned for days: benzene, xylene, naphtha, toluene, and pyrolysis gasoline, known as Pygas, along with other oil processing related chemicals.

According to prior local reports:

Officials said the components are in gas blend stocks used in the production of finished gasoline and base oil used for machine lubrication.

NAPHTHA can cause irritation to eyes and the respiratory system. It affects the central nervous system and is harmful and even fatal if it is swallowed.

Glyphosate, the world’s most common weed killer, has caused significant concerns over its potential risk to human health, animals, and the environment for several decades. Earlier this month, a US court awarded a groundskeeper $289 million who claimed Bayer AG unit Monsanto’s glyphosate-based weed-killers, including Roundup, gave him terminal cancer.

Now, a new report from PNAS alleges that glyphosate may be indirectly killing honey bees around the world, a threat that could potentially also leave a major mark on the global economy.

Brandnew research from The University of Texas at Austin shows that bees exposed to glyphosate, the active ingredient in Roundup, lose critical bacterial in their guts and are more susceptible to infection and death from harmful bacteria.

The report titled “Glyphosate perturbs the gut microbiota of honey bees,” was published in the Proceedings of the National Academy of Sciences of the United States of America (PNAS) on September 24. It provides enough evidence that glyphosate could be seen as the contributing factor to the rapid decline of honey bees around the world, otherwise known as Colony Collapse Disorder (CCD), a phenomenon that occurs when the majority of worker bees in a colony disappear and leave behind the queen.

“We need better guidelines for glyphosate use, especially regarding bee exposure, because right now the guidelines assume bees are not harmed by the herbicide,” said Erick Motta, the graduate student who led the research, along with professor Nancy Moran.

“Our study shows that’s not true.”

UT News of The University of Texas at Austin says that glyphosate interferes with an important enzyme found in plants and microorganisms, but not in animals, it has long been assumed to be nontoxic to animals, including humans and bees.

Leaked internal documents from Monsanto condemn the already-struggling giant to maintain some level of integrity. The company has been caught red-handed using a ghostwriter to craft their own independent safety reviews to be published in scientific journals.

According to Natural News, plaintiffs suing the agricultural company are alleging that Monsanto self-wrote several “independent” scientific reviews that “proved” that RoundUp’s main ingredient, glyphosate, was not a carcinogen.This set of internal Monsanto e-mails (which can be seen online) shows that the reviews that claimed to be “scientific” and “truthful” were anything but. If inhaling or ingesting glyphosate doesn’t give you cancer, then reading some of these documents might. It’s disturbing, to say the least, how a seemingly business-like correspondence details a conscious and deliberate effort to fool the public.

As more evidence compounded and was presented on the carcinogenic effect of their product, Monsanto suddenly took to more suspect behavior. Spokespeople from the company repeatedly denied claims that glyphosate induced cancer and to prove that it was not all mouth-service, they pointed to scores of independent, third-party reviews that concluded to no such effect. These studies were a rebuttal to a 2015 assessment by the International Agency for Research on Cancer (IARC) that suggested that glyphosate was a probable human carcinogen. This triggered a wave of lawsuits from individuals who claimed that they had contracted non-Hodgkin lymphoma from exposure to Monsanto’s product, RoundUp.

Monsanto’s most recent review called “An Independent Review of the Carcinogenic Potential of Glyphosate.” Supposedly, Monsanto paid Intertek Group Plc to “supervise” the article. Lawyers from Monsanto, nevertheless, countered that the company’s involvement was limited to engaging the consultants of Intertek.

Monsanto Claims A Breach Of Its Constitutional Rights

MONSANTO CLAIMS A BREACH OF ITS CONSTITUTIONAL RIGHTS

The Monsanto Company is again under fire as a recent report states that Glyphosate, the main ingredient in the company’s money-making Roundup herbicide, is the most widely used herbicide chemical in the world. Studies have suggested that this chemical is a possible human carcinogen. In fact, the Environmental Protection Agency includes Glyphosate in it’s list of carcinogenic risk chemicals.

The report, which was written by Charles M. Benbrook of the Environmental Sciences Europe journal, states that more than 3.5 billion pounds of Glyphosate have been used in the US alone since Roundup’s release in 1974. This number climbed drastically after the introduction of Roundup Ready crops in 1996. The report cites recent studies that have found links between Glyphosate exposure and serious health effects such as liver and kidney disease, and some types of cancer.

Benbrook states “The dramatic and rapid growth in overall use of glyphosate will likely contribute to a host of adverse environmental and public health consequences,” http://enveurope.springeropen.com/articles/10.1186/s12302-016-0070-0 He goes on to say “My hope is that this paper will stimulate more research on glyphosate use and human and environmental exposure patterns to increase the chance that scientists will quickly detect any problems that might be triggered, or made worse, by glyphosate exposure.”

Glyphosate was declared a “probable carcinogenic to humans” in March of 2015 after a unanimous vote by 17 of the world’s leading cancer researchers within the International Agency for Research on Cancer. This was done in behalf of the World Health Organization.

In September of 2015, the state of California’s Office of Environmental Health Hazard Assessment (OEHHA) responded to these actions by beginning the legal process of listing Glyphosate as a known human carcinogen under the Proposition 65 Law, which was first introduced in 1986 as the Safe Drinking Water and Toxic Enforcement Act. http://oehha.ca.gov/prop65/CRNR_notices/admin_listing/intent_to_list/090415LCset27.html

Intensive use of pesticides in California and other agricultural centers presents a risk to farmworkers and their families that is still only dimly understood, writes Dennis J Bernstein.

Industrialized Agriculture is addicted to chemistry in the form of pesticides. The addiction was marketed to the American People, along with other post World War Two miracles such as nylon stockings and the ball point pen. The pen and the nylons, of course, ultimately proved much less dangerous than the chemical fix for company profits.

Between 1947 and 1949, pesticide companies invested nearly $4 billion into expanding their production facilities, and made huge profits. By 1952-53, there were some 10,000 separate new pesticide products registered with the USDA, in what was labeled by journalists and historians as “The Golden Age of Pesticides.” 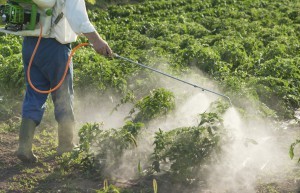 Today, well over 33 million pounds of fumigants are used in California agriculture each year with over 9 million of cancer-causing chloropicrin alone. For strawberries grown in the state, fumigants account for 87 percent of all pesticide use. A 2014 report by the California Department of Public Health (DPH) found that fumigants dominate the top five pesticides of public health concern sprayed and spread in close proximity to schools.

A disturbing new study out of UCLA’s Sustainable Technology & Policy Program found, in a case study of three fumigant pesticides commonly applied together in California, that “these pesticides may interact to increase the health risk for California farm workers and residents” and regulators do not exercise their authority to regulate the application of multiple pesticides to prevent or decrease risks to human health.

The UCLA study found that “Each of the pesticides … causes adverse health effects in humans or animals, including acute, developmental, reproductive, and neuro-toxicity, and carcinogenicity and mutagenicity. There is a reasonable likelihood that the three pesticides can interact to synergistically increase the toxicity to humans.”

The Chilling Thing an Industry Insider Said about Glyphosate, GMOs, and Why He Sold His Conventional Seeds Company

The Chilling Thing an Industry Insider Said about Glyphosate, GMOs, and Why He Sold His Conventional Seeds Company

Dan Romig, who along with his father co-founded Trigen Seed LLC in 1993 and bloodstresold to Limagrain Cereal Seeds in 2010, is an insider in the seeds industry. His father was head of R&D at Northrup King, a subsidiary of Syngenta, which Monsanto is currently trying to acquire.

The combined Monsanto-Syngenta behemoth would control a third of the globe’s seed and pesticides markets.

Among the controversies surrounding Roundup, Monsanto’s flagship product, and largest selling weed killer in the world, there is this one: the International Agency for Research on Cancer (IARC), a component of the UN’s World Health Organization, declared that glyphosate, one of the active ingredients in Roundup, is “probably carcinogenic.”

Don Quijones, in his article on WOLF STREET, Monsanto Bites Back, vivisected the implications of the Monsanto-Syngenta deal and issues surrounding glyphosate.

Dan Romig then commented on the article from his insider point of view, and in doing so also told the story of his company and why they ended up selling it. It’s a chilling, insightful, and important read:

Glyphosate is now being used by grain producers to desiccate their fields before harvest. Four days before running the combine, growers spray their fields to kill weeds and their plants in order to have an easier harvest. But in so doing, glyphosate then enters the final product (wheat, barley, oats, and others). Almost every human being has it in their bloodstream.

Dr. Stephanie Seneff [Senior Research Scientist at MIT] has led the way in research on what this does to a person. As glyphosate gets into the digestive tract, it kills much of the beneficial bacteria and produces intestinal permeability, or ‘leaky gut syndrome.’ It also chelates minerals such as aluminum, and then ‘cages’ the aluminum which goes into the bloodstream, and finally ends up in the pineal gland. Look at the correlation between when RoundUp was invented in 1970, put into mass use around 1979 and then unleashed into GMO crops in the late 1990’s, and the rise in Alzheimer’s and autism among other neurological disorders.