[Episode #108] – Will Energy Transition Be Rapid or Gradual?

[Episode #108] – Will Energy Transition Be Rapid or Gradual?

Champions of energy transition see it happening relatively quickly, emphasizing the advances that are being made in technologies, policy, and projects. While fossil fuel incumbents see a long, gradual process of energy transition, assuring us that demand for their products will remain strong for decades to come. So who’s right? Is energy transition going to be rapid, or gradual?

A new paper co-authored by Carbon Tracker, Bloomberg New Energy Finance, and the Rocky Mountain Institute contrasts these narratives and scenarios, and identifies some key distinguishing characteristics that can help us understand where they differ, as well as clarifying their underlying assumptions and perspectives, using those insights to inform our outlooks. In this episode, one of the authors from Carbon Tracker explains the analytical framework applied to these contrasting narratives, and shares his insights about the impact of the energy transition on financial markets, domestic politics and geopolitics, and how incumbents will have to navigate the new reality of climate change.Guest:

Kingsmill Bond is the Energy Strategist for Carbon Tracker, a London-based clean energy think tank. He believes that the energy transition is the most important driver of financial markets and geopolitics in the modern era. Over a 25 year career as an equity analyst and strategist at institutions such as Deutsche Bank, Sberbank and Citibank, he has researched emerging markets, the shale revolution and the impact of US energy independence. At Carbon Tracker, he has written about the impact of the energy transition on financial markets, domestic politics and geopolitics, and authored a series of reports on the myths of the energy transition, looking at the many arguments made by incumbents to deny the reality of change.

On the Web:  Kingsmill’s page at Carbon Tracker

Is A Supply Crunch In Oil Markets Inevitable?

Is A Supply Crunch In Oil Markets Inevitable?

The oil industry is more profitable than at any time in years, yet the industry could fail to supply enough oil to meet global demand in just a few years’ time.

A series of second quarter earnings reports over the past two weeks has revealed surging profits across the oil industry, with some companies posting earnings that are double or triple from a year earlier. But even though they are flush with cash, the industry has not returned to the profligate spending levels that were common prior to the 2014 market downturn.

Depending on one’s perspective, that could be a good thing or a bad thing. According to Carbon Tracker, the oil industry has trillions of dollars of projects in the pipeline that will become financial risks as governments around the world seek to address climate change. In essence, lots of oil and gas reserves will remain in the ground due to forthcoming taxes, regulation or simply demand destruction as alternatives take hold. Against this backdrop, a shortfall in spending is not such a bad thing.

On the other hand, energy agencies and forecasters, such as the International Energy Agency, have warned that the current pace of spending by the global oil industry is insufficient.

The downturn that began in 2014 led to a severe cutback in spending on exploration and development. Spending plunged by 25 percent in 2015, followed by another 26 percent decline in 2016. Since then upstream expenditures have bottomed out, rebounding 4 percent last year. The industry is only track to increase spending by another modest 5 percent in 2018. But there is little sign that the industry will return to spending at the same rate that it did prior to the downturn. 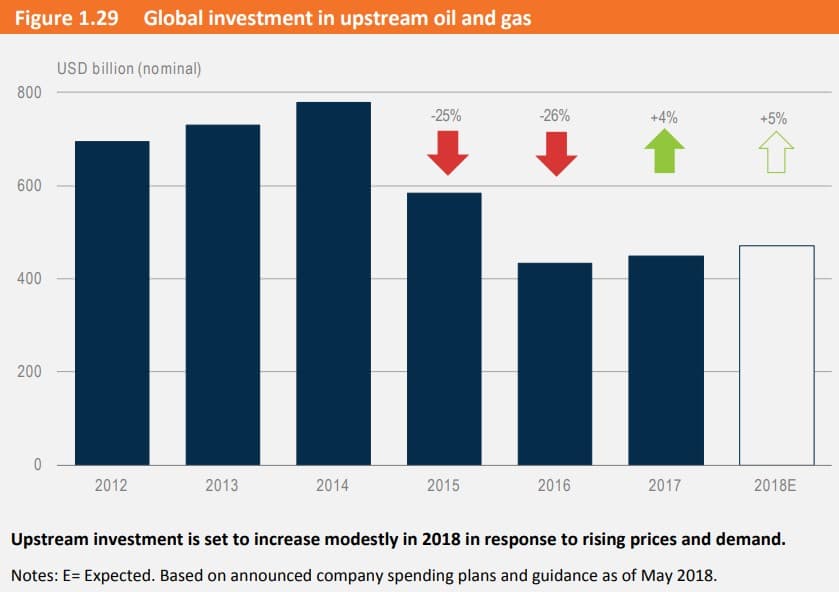 What The Oil And Gas Industry Is Not Telling Investors

What The Oil And Gas Industry Is Not Telling Investors

Oil prices crashed because of too much supply, but will rebound as production shrinks and demand rises. But what if long-term demand for oil ends up being sharply lower than what the oil industry believes?

That is the subject of a new report from The Carbon Tracker Initiative, which looks at a range of scenarios that could blow up oil industry projections for long-term oil demand.

Historically, Carbon Tracker says, energy demand has been driven by population, economic growth, and the efficiency (or inefficiency) of energy-using technologies. Carbon Tracker looks at a couple possible future scenarios in which those parameters are altered, resulting in dramatically lower rates of oil consumption.

Related: Iran May Not Be That Attractive To Oil Industry After All

Carbon Tracker has been a pioneer in the concept of “stranded assets,” the notion that fossil fuel assets will lose their value as the world moves to restrict carbon emissions. If an oil field cannot be produced profitably in a carbon-constrained world – or cannot legally be produced because of certain regulations – then it ceases to have value. That puts investors’ dollars at risk, a risk that financial markets have not fully grappled with.

However, in a new report, Carbon Tracker expands upon the possible scenarios in which oil demand may not live up to industry predictions.

For example, if the world population hits only 8.3 billion by 2050 instead of the 9.7 billion figure typically cited by the UN, fossil fuel consumption could end up being 17 percent lower in 2050 than the oil industry thinks. Coal would be affected the most, with 25 percent reduction in demand compared to the business-as-usual case.