The food-exporting superpowers are easy to identify.

As my esteemed colleague Michael Snyder chronicled in a recent Zero Hedge post, world agricultural production is under assault from extreme weather and diseases such as African swine fever. Floods & Drought Devastate Crops All Over The Planet; Is A Global Food Crisis Be Coming?

Everyone understands extreme weather is a danger to food production. The overuse of antibiotics is less well understood. As this article explains, most antibiotics are given to livestock, which then become breeding grounds for antibiotic-resistant microbes, which are known as superbugsonce they develop immunity to all conventional antibiotics.

Almost 80% of all antibiotics in the United States aren’t taken by people. They’re given to cows, pigs, and chickens to make them grow more quickly or as a cheap alternative to keeping them healthy. These drugs could give rise to superbugs—bacteria that can’t be treated with modern medicine—and things are only getting worse. In 2013, more than 131,000 tons of antibiotics were used in food animals worldwide; by 2030, it will be more than 200,000 tons.

Here’s the problem with superbugs: you can’t kill them with standard-issue antibiotics. They spread like wildfire through monoculture crops and livestock yards and kill with indiscriminate alacrity.

The only solution, poor as it is, is to kill every animal that might be infected–tens of millions or hundreds of millions in the case of African swine fever.

Pigs and chickens are breeding grounds for diseases that jump the low barrier between livestock and humans. So the superbug that starts out killing animals can, with generally modest genetic modifications via variability, start infecting and killing humans with the same alacrity.

WHO’s 2050 Prediction: 10 Million People Could Die from Mutated Superbugs And We’ll Have No Drugs to Fight Them

WHO’s 2050 Prediction: 10 Million People Could Die from Mutated Superbugs And We’ll Have No Drugs to Fight Them

The discovery and widespread use of antibiotics many decades ago have saved millions of lives. Infections that were once a death sentence were easily treated with the medications. Unfortunately, many antibiotics are now becoming ineffective because bacteria have become resistant to the drugs.

We have overused antibiotics with reckless abandon and are now beginning to see the consequences. Some bacteria have mutated into “superbugs”.

We’ve used antibiotics so freely, some bacteria have mutated into so-called “superbugs.” They’ve become resistant to the very drugs designed to kill them. A study commissioned by the British government estimates that by 2050, 10 million people worldwide could die each year from antibiotic-resistant bacteria. That’s more than currently die from cancer. (source)

Infections by drug-resistant microbes may eventually be the leading cause of death.

The World Health Organization predicts that worldwide death rates from drug-resistant microbes will climb from the current 700,000 per year to 10 million by 2050. At that point, they will have surpassed cancer, heart disease, and diabetes to become the main cause of death in the human race.

Antibiotic resistance is one of the biggest health threats of our time, according to the Centers for Disease Control and Prevention (CDC):

Antibiotic resistance has the potential to affect people at any stage of life, as well as the healthcare, veterinary, and agriculture industries, making it one of the world’s most urgent public health problems.

Each year in the U.S., at least 2 million people are infected with antibiotic-resistant bacteria, and at least 23,000 people die as a result. (source)

Karen Hoffmann, who heads the Association for Professionals in Infection Control and Epidemiology, told Newsweek those figures may be on the low side: 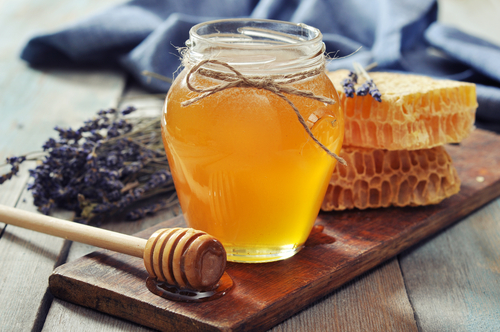 Ready Nutrition readers, the use of honey in medical emergencies is older than recorded history. There are many reasons that honey is excellent for use in first aid and homeopathic aids such as cuts, abrasions, burns, coughs, colds, and infections. Honey has anti-inflammatory properties and is also anti-bacterial/microbial in nature. Honey is bacteriostatic against certain “bugs” such as E. coli and Salmonella. Bacteriostatic means that honey prevents these organisms from growing…and as these two are found in food, that’s a good thing.

Honey actually fights against bacteria such as Pseudomonas aeruginosa, and Staphylococcus aureus. The latter is the most common bacteria found in the human nasal passages and nose. Also, honey should be as raw as possible, and the darker the better.  Dark honey contains more antioxidants, and it is more effective in fighting microorganisms and bacteria.

It is highly effective as a cough-suppressant and as a demulcent. That latter term means something that coats the throat and the linings of the trachea and mouth to soothe the surfaces…a principle for which cough drops and lozenges have a primary function/goal.  Buckwheat honey surpasses dextromethorphan (the primary cough suppressant found in Robitussin, for example) in terms of cough suppressant action.

There is also a type of honey known as Manuka Honey, a special type of healing honey that can fight against more than 200 types of bacteria and some of the species it defeats are resistant strains such as MRSA (Methicillin-resistant Staphylococcus aureus). Manuka honey is obtained from bees that are in New Zealand and is differentiated from other types of honey for its healing qualities because it comes from pollen the bees there take from the Manuka bush. Lab-grown mosquitoes armed with bacterium Wolbachia pipientis have just been approved by the EPA. The agency is saying that these mosquitoes could be the key to killing off insects that often transmit dangerous viruses such as Zika.

Nothing can go wrong, right? The government would never do that to us. Famous last words, but nonetheless, the created mosquitoes are very real! Mosquitoes are annoying the way it is, and adding the Zika virus has been exactly no fun for anyone. But is it worth infecting mosquitoes with bacteria in order to help stop the Zika virus? The EPA (Environmental Protection Agency) says “yes.”

On November 3, the Environmental Protection Agency approved a new approach from the biotech company MosquitoMate. The goal is to destroy populations of wild mosquitoes that could be carrying nasty viruses, according to a report from Nature magazine. –CNET

MosquitoMate infects lab-grown mosquitoes with the common bacterium Wolbachia pipientis, which affects mosquitoes but they claim, it does not affect not animals or humans. They chose to infect lab-grown mosquitoes over genetic modification, although the reason for this decision is not yet known. MosquitoMate will release these insects in 20 states (which include Washington D.C., and Kentucky) this summer.

But the process to create these mosquitoes is time-consuming, and millions must be made and infected for the insects to do their job, and make a dent in the Zika virus.