From Gold To Nothing: How 1971 Changed Everything In The Economy

From Gold To Nothing: How 1971 Changed Everything In The Economy

The monetary system is a major component of the whole economic system. Despite that, today we take it for granted and don’t even ask ourselves how it works and if it is the best solution available or the correct way to manage things.

Even though it appears to be stable, history shows that monetary systems changed periodically in the last century (20–30 years on average).

That means that what we call money is a government-issued currency that has zero intrinsic value and is not backed by anything.

From 1971, this kind of system allows central banks to literally control the economy and opened a new chapter in the world monetary system.

In this article, I am going to briefly explain why 1971 changed everythingand what are potential consequences of such a decision.

Since 1971 the world runs on FIAT currencies that are not gold-backed in any way. This changes everything.

Before digging into it, we have to review some history.

Towards the end of the World War II, peace was a real concern and it was clear that the world needed a new monetary system able to support the economy.

In fact, one of the major reason that led to World War II was the failure in dealing with economic problems after World War I.

Why It Was Needed And How It Worked

The Bretton Woods agreement was signed at a conference between allied nations in 1944.

The Dollar’s 70-Year Dominance Slowly Coming To An End

The US dollar hasn’t been backed by gold since 1971, but that might change soon. Republican Congressman Alex Mooney is proposing that the US once again place value on the dollar by backing it with physical gold. The problem is, the Federal Reserve has been printing money with the abandon of a drunken copy machine, and the 147.3 million ounces of gold being held in Ft. Knox may not be enough to cover the out-of-control fiat currency currently in circulation.

According to Alex Mooney’s bill, the dollar has decreased 30 percent in purchasing power since 2000. It has lost 96 percent of its value since 1913. On an average, the US is devalued by 50 percent every generation. 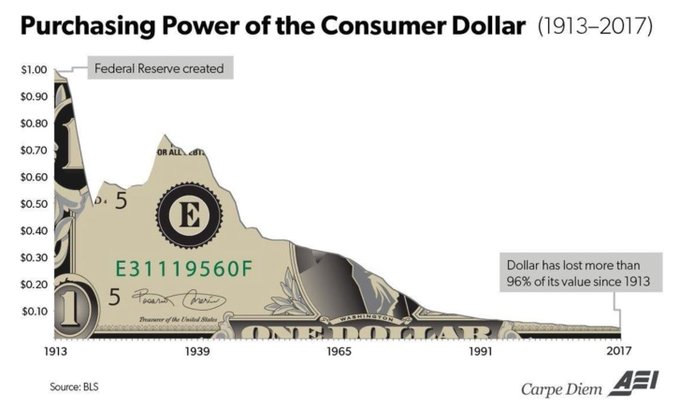 RETWEET if you agree.

If the gold standard were to be reinstated, control of the dollar would revert to free market forces instead of the whim of the Federal Reserve. It would mean that each dollar would have its equivalent in gold, as it did prior to 1913. At that time, the US economy grew at a robust annual rate of 4 percent compared to an average annual growth of 2 percent since 2000.

Officially, the US has 8,133.5 tons of gold in reserves, although the government won’t confirm that number. No one is permitted inside the various vaults to verify. Even the purity of the available gold bars is in question, as many may not conform to industry standards. As other countries contemplate the return to the gold standard, unless the US catches up, the dollar will lose its dominance as the world reserve currency.

On August 15, 1971, President Nixon killed the last remnants of the gold standard.

It was one of the most significant events in US history—on par with the 1929 stock market crash, JFK’s assassination, or the 9/11 attacks. Yet most people know nothing about it.

After World War 2, the US had the largest gold reserves in the world, by far. Along with winning the war, this let the US reconstruct the global monetary system around the dollar.

The new system, created at the Bretton Woods Conference in 1944, tied the currencies of virtually every country in the world to the US dollar through a fixed exchange rate. It also tied the US dollar to gold at a fixed rate of $35 an ounce.

The Bretton Woods system made the US dollar the world’s premier reserve currency. It effectively forced other countries to store dollars for international trade, or to exchange with the US government for gold.

By the late 1960s, the number of dollars circulating had drastically increased relative to the amount of gold backing them. This encouraged foreign countries to exchange their dollars for gold, draining the US gold supply. It dropped from 574 million troy ounces at the end of World War 2 to around 261 million troy ounces in 1971.

To plug the drain, President Nixon “suspended” the dollar’s convertibility into gold on August 15, 1971. This ended the Bretton Woods system and severed the dollar’s last tie to gold.

Since then, the dollar has been a pure fiat currency, allowing the Fed to print as many dollars as it pleases.

Of course, Nixon said the suspension was only temporary. That was lie No. 1. It’s still in place over 40 years later.

And he claimed the move was necessary to protect Americans from international speculators. That was lie No. 2. Money printing to finance out-of-control government spending was the real threat.

..click on the above link to read the rest of the article…

The Boomer Retirement Meme Is A Big Lie

THE BOOMER RETIREMENT MEME IS A BIG LIE

As the labor participation rate and employment to population ratio linger near three decade lows, the mouthpieces for the establishment continue to perpetuate the Big Lie this is solely due to the retirement of Boomers. It’s their storyline and they’ll stick to it, no matter what the facts show to be the truth. Even CNBC lackeys, government apparatchiks, and Ivy League educated Keynesian economists should be able to admit that people between the ages of 25 and 54 should be working, unless they are home raising children.

Over the last 16 years the percentage of 25 to 54 full-time employed Americans has fallen from 65% to 62%. I guess people are retiring much younger, if you believe the MSM storyline. Over this same time period the total full-time employment to population ratio has fallen from 53% to 48.8%. The overall labor participation rate peaked in 2000 at 67.1% and stayed steady between 66% and 67% for the next eight years. But this disguised the ongoing decline in the participation rate of men.

In part 2 of the “Man in the Moon” series we look at Paul Volcker’s roundtrip – monetary policies and their impacts from 1971 through the Great Leveraging to today. Part 1 can be found here.

Bretton Woods effectively died in August 1971 (officially 1973) when the U.S. Treasury ceased exchanging dollars for gold in what became known as “The Nixon Shock”. Overnight, global money and credit became un-tethered to anything scarce. (The Man in the Moon is concerned only with understanding the value of money, not gold’s status as an economic, financial and political lightning rod.)

What followed from 1973 to 1982 in the West was a period of significant inflation coincident with economic stagnation (i.e., “stagflation”), a state of dis-equilibrium with which most global economists were unfamiliar. 1970s stagflation is now commonly blamed on two Middle East wars, in 1973 and 1979, which led the Organization of Oil Producing Exporters (OPEC) to embargo crude oil and drive its price higher. It is thought the embargo created higher prices coincident with an economic slowdown because consumption dropped without a commensurate and offsetting downward adjustment in oil prices.

Such macroeconomic analysis begins with the vagaries of geopolitics – the wars. Less blame is placed on what was then the new threat of a dramatically increasing stock of global currency – currency the OPEC cartel would have to accept in exchange for their relatively finite oil.