Home » Environment » Strong signs that La Nina is breaking down

Strong signs that La Nina is breaking down

Strong signs that La Nina is breaking down After three successive La Niñas, there are strong signs that the latest La Niña is quickly waning and will release its grip and move towards neutral in its effect on Australia in the second half of summer into autumn, as the previous two did.

This means we can expect an end to the relentlessly wet weather which has lashed large parts of Australia in recent summers, and for much of 2022 – with a return to drier, potentially warmer conditions as we move through summer.

How do we know this? The chart below tells you most of what you need to know. 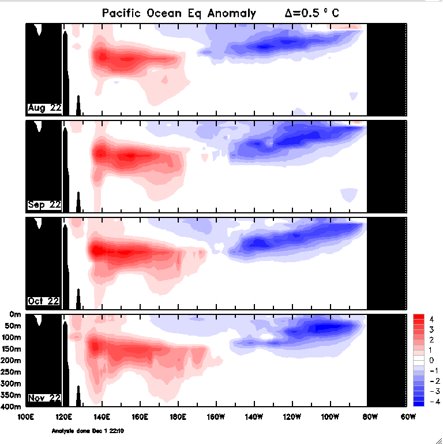 In simple terms, as those red blobs move west (or to the right of the chart), the effects of La Niña become less pronounced.

Why does warmer water moving away from our region signal the end of La Niña?

If you go back to the La Niña explainer piece which we wrote in September 2022, we told you that La Niña occurs when: