State of the American Debt-Slaves, Q3 2020: The Stimulus & Forbearance Phenomenon

Consumers have undertaken an astounding project instead of consuming: Paying down their credit cards. In September, outstanding balances of credit cards and other revolving credit ticked down by a tad to $949 billion, not seasonally adjusted, the lowest since July 2017.

Credit card balances spike in December during the shopping season and then decline during credit-hangover season in January and February. In March, they start rising again. But not this year. In March, credit-card balances fell, and then in April, when the stimulus checks arrived and when people stopped going out and spending money, credit-card balances plunged the most ever. And they have continued to tick down every month since then (not seasonally adjusted). By the end of September, according to Federal Reserve data on Friday, they were down 9.2% from September last year: 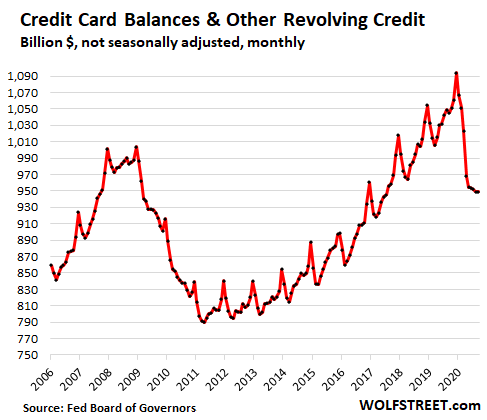 They had a lot of help in form of government money – the stimulus checks and the extra unemployment benefits of $600 a week, and then of $300 a week, both now expired, and the federal Pandemic Unemployment Assistance [PUA] program for gig workers that has been surrounded by allegations of massive fraud, and so on. Whether fraudulent or not, this money got into the hands of consumers.