After an already painful start for the Turkish lira this year, shedding more than 3.5% of its value against the dollar during the first three days of 2019 when it flash crashed after Mrs Watanabe puked on the carry trade after Apple shockingly guided lower, and after early this week the lira slid lower amid renewed tensions between the US and Turkey following hopes that the feuding NATO members might finally be setting aside their differences, dashed after Bolton’s snub heard round the world by President Erdogan, the lira is now tumbling on fears of further military escalation in Syria.

“We have Manbij, and the east of Euphrates ahead. Necessary planning was made regarding this. Our preparation continues intensely,” Defense Minister Hulusi Akar said while inspecting troops near the border with Syria, according to Anadolu.

The uncertainty and fears of another major flare-up following last year’s ‘Operation Olive Branch’ sent the lira diving to session lows, and is approaching levels last seen at the start of November. 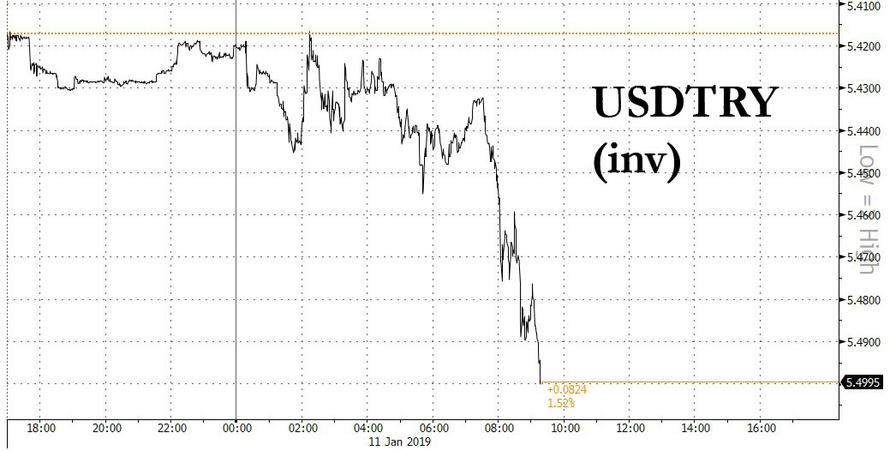 Turkey has billed its plans as a “counter terror” op, with the defense minister noting dubiously, “We have no problems with our Kurdish brothers, Arab brothers in Syria, Turkmens and other ethnic and religious groups. Our only targets are terrorists Daesh and PKK/YPG.”

Turkey has for months stated plans to eradicate the presence of the Kurdish YPG, which it considers a terror extension of the outlawed PKK, from near Turkey’s borders.

The question is how will the US (and Israel/Iran/Russia) respond once Turkey follows though with the action so many had been expecting and invades, again.

← Climate Change Debunked: No Sign Of Warming In 900 Years US Electric Grid Hacked: Perpetrators Could Have Shut Down the System →