Why Economists Can’t Understand Complex Systems: Not Even the Nobel Prize, William Nordhaus

Why Economists Can’t Understand Complex Systems: Not Even the Nobel Prize, William Nordhaus 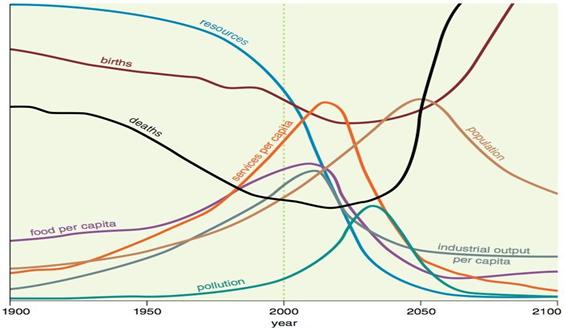 The “base case” scenario of “The Limits to Growth” 1972 report to the Club of Rome. The strong non-linearity of the behavior of complex systems — including the global economy — is nearly impossible to understand for people trained in economics. William Nordhaus, the recent Nobel prize winner in economics, is no exception to the rule. In this post, I’ll report how, at the beginning of his career, Nordhaus criticized “The Limits to Growth”, showing in the process that he had understood nothing of the way complex systems work.
After having been awarded the Nobel prize in economics of this year, William Nordhaus has been often presented as some sort of an ecologist (see, e.g. this article on Forbes). Surely, Nordhaus’ work on climate has merit and he is one of the leading world economists who recognize the importance of the problem and who propose remedies for it. On the other hand, Nordhaus’ approach on climate can be criticized: he tends to see the problem in terms of costs and solvable just by means of modest changes.
Nordhaus’ approach to climate change mitigation highlights a general problem with how economists tend to tackle complex systems: their training makes them tend to see changes as smooth and gradual. But real-world systems, normally, do what they damn please, including crashing down in what we call the Seneca Effect.
On this point, let me tell you a little story of how Nordhaus started his career at Yale by an all-out attack against system dynamics, the method used to prepare the 1972 study “The Limits to Growth,” showing in the process that he had understood nothing on the way complex systems work.