Turning Trees Into Enemies. The New War on Forests

Turning Trees Into Enemies. The New War on Forests 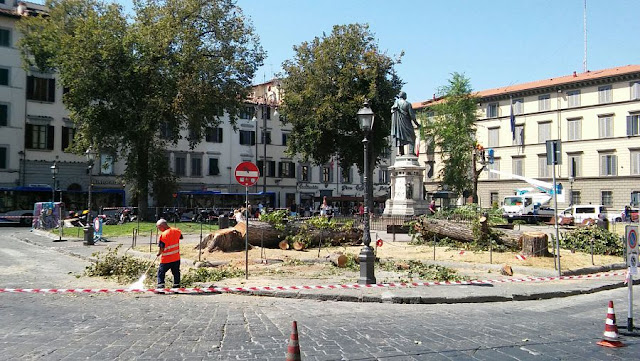 The San Marco Square in Florence in 2017. You can see the ancient trees of the square being cut as part of a plan that involved the removal of several hundred trees in the whole city. The action was accompanied by a propaganda campaign against trees that looked curiously similar to that used to justify the invasion of Iraq, in 2003. “Trees are a threat to citizens,”, “There is no alternative,” “Killer Trees,” and the like.

The war on trees seems to be starting. I don’t know about what’s happening where you live, but here, in Italy, we see it clearly, accompanied by all the propaganda tricks normally used to start wars. So, we have seen a string of accusations in the media against “killer trees,” supposed to be a danger for the citizens because they can fall on them or on their beloved shiny cars. The image on the right, here shows the first page of an Italian newspaper in 2014 informing us there are “50,000 killer trees” in Rome. Truly an invading army to be fought with the appropriate weaponry in the form of chainsaws.

One century ago, city administrations were proud of planting trees, today they are proud of cutting them. What happened that changed their attitude so much is hard to say. Maybe it is the general degradation of the ecosystem that has turned trees into monsters, but that doesn’t explain how administrations are starting also a war on forests – surely not threatening citizens or their cars. In a previous post, I commented on a recent piece of legislation in Italy that forces land owners to cut their woods even if they don’t want to. From the comments I received to that post and from what I can read on the Web, I think I can say that the war on trees is not just an Italian phenomenon, it is worldwide.