WHO Prepares For “Worst Case” As Congo Ebola Outbreak Spreads

WHO Prepares For “Worst Case” As Congo Ebola Outbreak Spreads

In the week since we first noted the new outbreak of Ebola in the Democratic Republic of Congo, the number of cases has risen by 50%, and The World Health Organization has now said it is preparing for “the worst case scenario.”

The WHO has tallied 32 suspected or confirmed cases in the northwestern area of Bikoro, on the shores of Lake Tumbathe near the border with the Republic of Congo, including 18 deaths, between April 4 and May 9.

The outbreak, declared by the DRC health ministry on Tuesday, is the DRC’s ninth known outbreak of Ebola since 1976, when the deadly viral disease was first identified in then-Zaire by a Belgian-led team.

Scientists are greatly concerned that this outbreak in the remote Bikoro region will travel 175 miles to the city of Mbandaka – the capital of Equateur province and home to around 1.2 million residents. 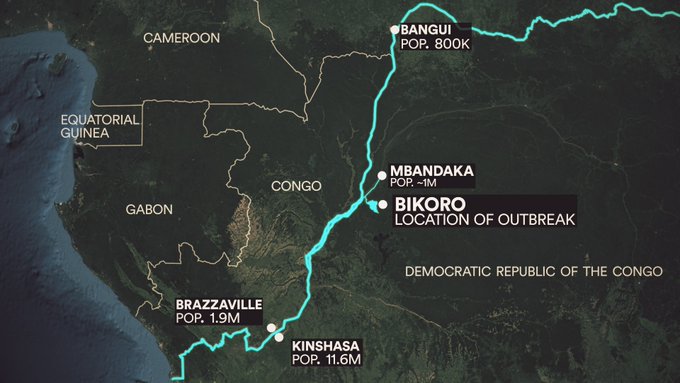 We’ve updated this map. Turns out that the provincial capital of Equateur, Mbandaka, is home to roughly 1M people. It’s less than 300 km or 175 miles from Bikoro and reachable by water.

What’s worrisome is that the most recent WHO update says that there are two probably cases at Wangata – which is very close to Mbandaka.

← New Rare Earth Resources: A Non-Solution For A Non-Problem OPEC: The Oil Glut Is Gone →