A-News captures video of the departure 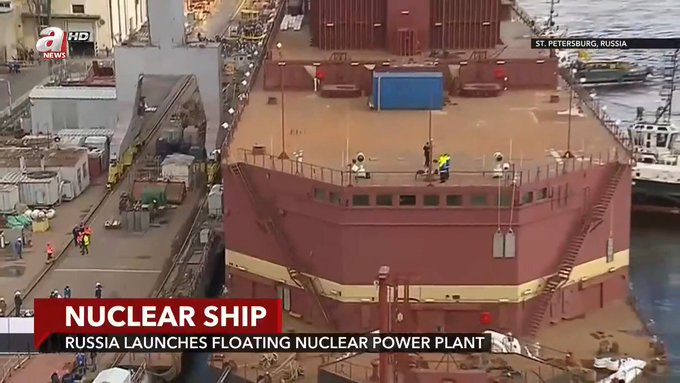 A floating nuclear power plant made by Russia headed out for its first sea voyage on Saturday. The floating plant, the academic lomonosov will provide power for a port town and for oil rigs.

Russia’s first floating nuclear power plant has two KLT-40S reactor units that collectively generate 70 MW of energy. The tugs are currently underway — towing the vessel through the Baltic Sea to a port in northwestern Russia called Murmansk, where its reactors will be loaded with nuclear fuel.

According to the company that manufactured the floating power plant, state-owned Rosatom Corporation, Deputy Head of the Directorate for the Floating NPP Construction and Operation Dmitriy Alekseenko said in a press release that towing the vessel will occur in two stages: first from St. Petersburg to Murmansk, and then from Murmansk to Pevek.

“At the first stage, the FPU with no nuclear fuel on board will be towed from the territory of Baltiyskiy Zavod to the landing of Atomflot FSUE in Murmansk. Then, at the second stage (roughly in the summer of 2019) it will be sent from Murmansk to the seaport of Pevek, loaded with nuclear fuel and with the crew on board,” Alekseenko said.

After ‘Akademik Lomonosov’ is towed to Murmansk, “nuclear fuel will be loaded into the reactor, and it will be physically started-up in Murmansk this autumn,” said Rosatom’s press release.

← That Collapse You Ordered…? Russia Really Is America’s No. 1 Enemy – Depending on Who ‘America’ Is →