Home » Environment » The road to the Seneca Cliff is paved with evil intentions. How to destroy the world’s forests

The road to the Seneca Cliff is paved with evil intentions. How to destroy the world’s forests

The road to the Seneca Cliff is paved with evil intentions. How to destroy the world’s forests 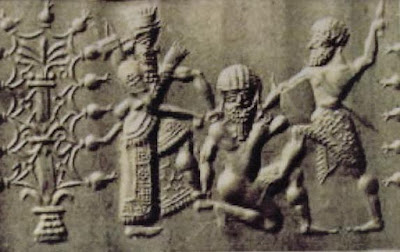 The oldest stories of human lore have to do with cutting trees and with the disasters that followed as a consequence. Above, Legendary Sumerian heroes Gilgamesh and Enkidu kill the guardian of the trees, Huwawa (image source). Several thousand years afterward, we don’t seem to have learned much about how to manage our natural resources.

I expected this to happen, perhaps not so soon and not in this form, but it had to come. With the era of cheap fossil fuels coming to a close, what’s left as low-cost fuel is wood and that had to be the target of the next wave of exploitation. Naively, I was thinking that the rush to wood would have taken the form of desperate people moving to the woods with hand-held axes, but no, in Italy it is coming in a much more destructive way. It is a government decree approved on Dec 1st, 2017 which allows local administrations to cut woods, even against the will of the owners of the land. It is the start of a new wave of deforestation in Italy, probably an example that the rest of the world may follow in the near future.

It is a long story that goes back to the roots of Italian history. Already in Roman times, deforestation was a major problem, believed to have generated the marshes still present in Italy in modern times. During the Middle Ages, woods returned and were cut again in several cycles, the last one coming with the political unification of Italy, in 1861. At that time, the Piedmontese government treated the newly acquired lands as spoils of war, razing down ancient forests without any regrets. The story is reported in a novelized form by the British writer Ouida, in “A village commune.” (1881).
…click on the above link to read the rest of the article…

← What Will Weapons Inspectors Find in Syria…And Does it Matter? Lise van Susteren on Pre-Traumatic Stress Disorder and the imagination →