Home » Liberty » The danger of patriotism

The danger of patriotism 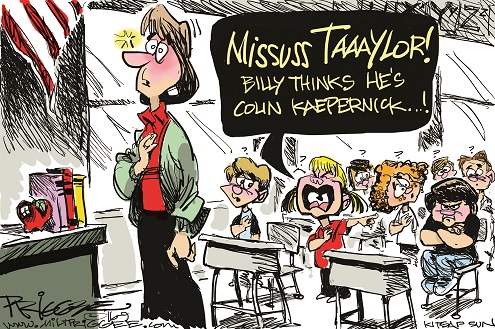 My friends, it is frightening how simple we are and how easily we are manipulated simply because we are intellectually lazy.

The U.S. establishment has confused cause and effect by and through a flag-waving mania in America. “Patriotism” throughout history has covered a multitude of mischief. We are seeing it now!

Phony patriotism is strong leverage against a population ignorant of the ways of treason by its own government. I also have no doubt that U.S. history is full of wars “for democracy” killing millions under the propaganda of patriotism with the majority support of the people and the full support of all but a small cadre of “elected representatives” — who are paid by the federal government, incidentally. In addition the millions of foreign dead, these wars have left hundreds of thousands of American military members dead or maimed physically and/or emotionally.

The whole world knows about the U.S. military industrial complex war machine and its pursuit of profits. But Americans tend to turn a blind eye.

Since by definition government is force, then it follows that government will use any ruse imaginable to increase its power. Increased use of government force or power could backfire unless skillfully handled and justified in the public mind. Therefore governments rarely take action unless accompanied by skillful propaganda.

The brouhaha over certain NFL players’ refusal to stand for the playing of the Star Spangled Banner has erupted anew. The reaction of most Americans — who claim to believe in the Constitution and Bill of Rights — is that this expression cannot be tolerated… it is un-American… it is “unpatriotic.”

← Spain In Crisis: Catalan Police Rejects Madrid Takover, Vows To “Resist” The Sermon On The Mount[ain Of Debt] →