5 Gray Man secrets I learned as a surveillance operative

5 Gray Man secrets I learned as a surveillance operative 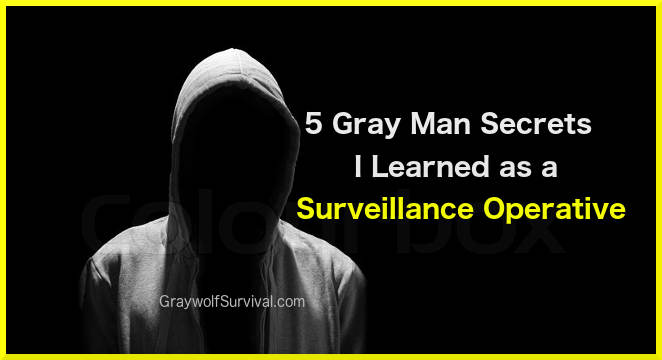 One of the questions I get fairly often is “what is the gray man,” and rightly so. It’s a concept that most people have a vague idea about, if any idea at all, since pretty much all they’ve been exposed to is maybe reading The US Army’s book on Human Intelligence Collector Operations – or what they’ve seen in movies (which is pretty terrible).

Luckily, this just happens to be something I’m very familiar with, having both been involved in real-world operations on source operations and surveillance teams as well as teaching agents in both classroom and field exercises (not to mention the crap ton of training I did, compliments of the government), so I’ll break down the basics for you as far as I understand the concept. If you really want to dig deeply into it, here’s a list of books that you might want to consider.

What is the Gray Man concept?

The gray man concept is the theory behind the tactics, techniques, and procedures of reducing an adversary’s awareness of your presence or actions, allowing you to operate in a semi-permissive environment.

In simpler terms, it means doing things in a way that any others either don’t pay attention to you or dismisses you from being a target while you go about your business. Essentially, it comes down to how to hide in plain sight.

← Mr. President, Your Predecessor Actually Wire Tapped ALL Of Our Phones… What Are You Going To Do About It? Oil Production Vital Statistics February 2017 →