Argentina Wants a Fracking Boom. The US Offers a Cautionary Tale

Argentina Wants a Fracking Boom. The US Offers a Cautionary Tale

Argentina’s President Alberto Fernandez takes office in the midst of an economic crisis. Like his predecessor, he has made fracking a centerpiece of the country’s economic revival.

Argentina has some of the largest natural gas and oil reserves in the world and “possibly the most prospective outside of North America,” according to the U.S. Energy Information Administration. If some other country is going to successfully replicate the U.S. shale revolution, most experts put Argentina pretty high on that list. While the U.S. shale industry is showing its age, Argentina’s Vaca Muerta shale is in its early stages, with only 4 percent of the acreage developed thus far.

The country feels a sense of urgency. Declining conventional production from older oil and gas fields has meant that Argentina has become a net importer of fuels over the past decade. Meanwhile, Argentina’s economy has deteriorated badly due to a toxic cocktail of debt, austerity, inflation, and an unstable currency.

For these reasons — a growing energy deficit, a worsening economic situation, and large oil and gas reserves trapped underground — there is enormous political support for kick-starting an American-style fracking boom in Argentina.

It has taken on a level of political significance that outstrips its immediate economic potential. In Argentina, Vaca Muerta is treated as the country’s chance at salvation, with fracking seen as doing everything at once — creating jobs, reducing the debt burden, plugging the energy deficit and turning Argentina into a major player on the global oil and gas stage.

In an oil sector first, the oil-rich United Arab Emirates (UAE) has offered free oil to India in return for a storage deal at India’s planned underground facility as the supply glut worsens and some analysts predict that ‘’peak storage” could sending prices crashing further.

The UAE’s Abu Dhabi National Oil Company (ADNOC) has agreed to store crudeoil in India’s maiden strategic storage facility, sweetening the deal by saying India could take two-thirds of the oil for free.

It’s a great deal for India, which is almost fully reliant on imports to meet its crude oil needs.

India has lured Abu Dhabi in with the building of a massive underground storage facility system that will be able to take on 5.33 million tons of crude as a bulwark against global price shocks and supply disruptions.

ADNOC is eyeing half the storage capacity at one of the new underground facilities, Mangalore, which has a 1.5-million-ton capacity on its own. Abu Dhabi plans to stock 0.75 million tons, or 6 million barrels of oil, here, and 0.5 million tons will belong to India.

The deal is reflective of a wider, global storage panic and talk of what could happen when we reach ‘’peak storage’’. A number of analysts have suggested that oil prices might crash to $20, or even $10 a barrel, if storage tanks become full.

Storage is now at the highest level in at least a decade.

According to the U.S. Energy Information Administration (EIA), about 60 percent of the U.S.’ working storage capacity is filled.

As is still the case—unfortunately, for all of us—there remains a sizeable number of individuals, organizations, and other associations determined at all costs [literally] to preserve the primacy of fossil fuels to power us into the future. Facts: good when they can be massaged to fit the partial-truth narrative required to breathe life into an industry unwilling to bend to the realities of geology, economics, and … well, reality. Facts: not good when they address the broad range of issues and concerns best left neglected to further that Abundance-No Worries narrative.

One-sentence talking points seem to be the ideal. No concerns about having to delve into the complexities of ideologically-troublesome issues, for one thing. Summary statements suggest there are no worries, for another.

As for the harm caused by failing to properly inform those relying upon the assessments of those others presumed to know? Who has the time to explain all those facts and details and what-nots?

According to the U.S. Energy Information Administration, in 1998, when the article was written, global oil production was 75.7 million bbl/day.  In 2014 it was 93.2, and our problem is too much oil.
It’s useful to remember such things when the ‘experts’ grandly tell us what’s going to happen. [1]

With the world awash in oil and prices falling toward $26 a barrel, Iran is set to add to the oversupply now that international sanctions have been eased.
It’s as if the whole world were conspiring to bury the tattered remains of the ‘peak oil’ thesis, so popular a few years ago. [2]

Economics and I have a gentlemen’s agreement: the less I discuss, the better. Notwithstanding, I do understand that when prices are as other-worldly low as they are now, few in the oil industry are eager to venture out and invest in production efforts they can ill-afford.

Oil futures prices (WTI) plunged 12.5 percent this week from $47.90 on Friday, November 3 to $41.96 yesterday morning, November 11. The main reason is that the global supply imbalance is getting worse.

Only OPEC estimates global oil demand. Their Monthly Oil Market Reportreleased today shows world oil demand growth of 1.6 million bpd so far in 2015 (Figure 3) but decreasing to 1.5 million bpd overall for the year and only 1.25 million bpd for 2016. OPEC data indicates about 1 million barrels of surplus supply relative to demand.

Related: A Bit Of Good News For The Global Coal Industry At Last

Oil storage tanks filled to levels not seen in 80 years

Oil storage tanks filled to levels not seen in 80 years

U.S. oil inventories at levels not seen in at least 80 years

North American oil prices could take a hit this fall as there are renewed concerns about a lack of storage capacity.

A recent report by the U.S. Energy Information Agency suggests crude oil inventories “remain near levels not seen for this time of year in at least the last 80 years.”

The concern is what will happen this fall and whether oil supplies will hit “tank top.” North American refineries are running at near capacity this summer, buying up oil and converting it to gasoline and other products. Several refineries will shut down in a few months for maintenance and there could be more unplanned outages because refineries are operating at such a high level.

Each fall, it’s typical for inventories to begin to build, but “the problem is we are at a much higher starting point,” said Jackie Forrest, a vice-president with ARC Financial, who monitors trends in the Canadian oil and gas industry. A lack of storage could impact North American oil prices and in particular West Texas Intermediate (WTI), the benchmark for the continent.

“It could cause a bit of a disconnect where WTI becomes a bit cheaper than global crudes, but I don’t think it is going to cause a serious problem where there is no room to store crude,” said Forrest. 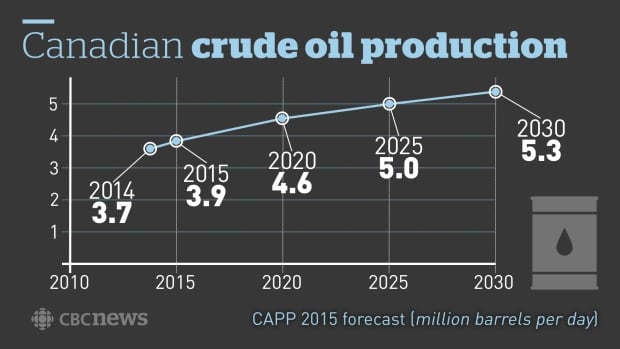 Canadian oil production is expected to rise over the next few decades.

The oilpatch had similar concerns in the spring. At that time, some companies began turning to ‘fracklog’ as one method of storing oil. Producers continue to drill wells, but stop just short of pumping out the oil. It’s a way of storing the oil in the ground. The goal is to hold on to the oil until prices rebound.