The largest typhoon in recorded history of Japan’s Shizuoka Prefecture caused widespread flooding, power outages and destruction on Saturday, as local authorities warned over 7 million people to evacuate, according to Bloomberg (with other sources quoting figures ranging from 1-4 million).

Japan Braces For Typhoon Hagibis Could Be Strongest In Decades

A powerful typhoon is headed for Japan this weekend, threatening to cripple Tokyo with the most torrential rains and winds in nearly six decades, reported Reuters.

In a statement Friday morning, meteorologist and owner of Empire Weather, Ed Vallee, said Typhoon Hagibis is expected to hit the Tokai/Kanto region on late Saturday. The likely Category 3 typhoon could then “grind” its way northward through the Tohoku region by late weekend.

“Hagabis is a strong typhoon in the west Pacific, making its way closer to mainland Japan. As of 3 PM Friday, Tokyo time, Hagabis was located due south of Japan. This system will continue to approach through Friday night, Tokyo time, with increasing rain and wind.

Only 4 storms have come within 100 miles of Tokyo as a Category 3 typhoon or higher. At this time, Hagabis will be weakening, and it may be weaker than this strength. Regardless, typhoon conditions are possible Saturday local time as this system passes. This will disrupt air travel, with all Nippon Airways flights expecting to be canceled. Railway systems will also likely be impacted, along with the Rugby World Cup, which has already been canceled. Damage to buildings and power outages are also expected. This storm will move away from the region to end the weekend,” the statement said.

Vallee also noted that the storm could be the strongest typhoon to hit Tokyo since the late 1950s.

He said rainfall and winds in the capital could damage critical infrastructure and cause life-threatening situations for its residents on Saturday.

The Japanese government said shopping districts, factories, and public transportation in the Greater Tokyo Area are being shut down in preparation for the storm.

Typhoon Jebi struck the heart of one of Japan’s largest metro areas on Tuesday, killing at least eight people and shutting down Osaka’s main international airport indefinitely, leaving close to 3,000 people trapped inside. The storm – the strongest on earth so far in 2018 – made landfall on Tuesday, bringing widespread flooding and winds of up to 130 miles an hour; it paralyzed swaths of the country shuttering shops, factories and amusement parks.

The storm was the strongest to make a direct hit on the nation’s main islands in 25 years, causing high tides that flooded Kansai International Airport, a key gateway for flights from China and other Asian countries that was built on an artificial island in 1994.

The typhoon prompted government evacuation orders for more than 49,000 people across southern Japan, with an additional 2 million people advised to flee, the Fire and Disaster Management Agency said. Early in the afternoon on Tuesday, an oil tanker unmoored by the storm crashed into the only bridge that connects Kansai International Airport in Osaka Bay to the mainland. The Coast Guard was using a helicopter and patrol boats to rescue crew members, the public broadcaster NHK said.

The storm traversed Japan’s main island of Honshu before traveling up its western coast, leaving a trail of death. Among the fatalities was the owner of a warehouse that collapsed on him, news reports said. 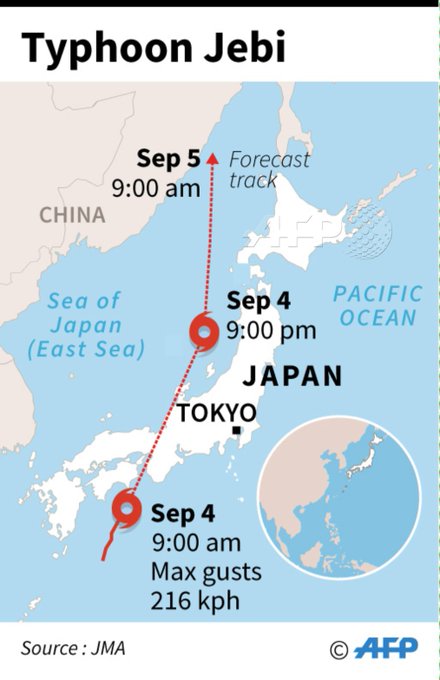 At least 700 flights have been canceled across Japan. Kansai Airport will not reopen on Wednesday. The local police said that travelers stranded at the airport, which sits on a man-made island, had been issued emergency water, bread and blankets, and that ferries were expected to start bringing people to safety Wednesday morning.

“We could do worse than to go back to the way nature manages rainfall.“

During the 20th Century, the rate of global warming was twice as fast in Taiwan (1.7°C) as for the world as a whole (0.74°C). Partly as a result, the number of days with rainfall decreased dramatically and typhoons gained strength. In 2009, Typhoon Morakot dropped over 1,000 mm (39.4 inches) in a single day and caused the loss of 699 lives. A massive mudslide wiped out Xiaolin Village and 474 people were buried alive. In 2015, Typhoon Soudelor left similar damage. It took months to repair the roads.

Then Taiwan and East China were struck by Dujuan, known in the Philippines as Typhoon Jenny, a killer storm and the thirteenth typhoon of the 2015 Pacific typhoon season. Eight months later, Nepartak became the third most intense tropical cyclone on record with 114 deaths and more than $1.5 billion damage in Taiwan and East China. September brought Meranti, a super typhoon and the strongest ever to make landfall in China in more than 1000 years of records. Meranti’s peak sustained winds tied the record set by Haiyan in 2013, 195 mph (315 km/h), comparable to a tornado, or a Category 5 hurricane on the Saffir-Simpson scale. In Taiwan, nearly 1 million households lost power and 720,000 lost water supplies. Flooding in Zhejiang took 902 homes and affected 1.5 million people.

Between those punctuations, the erratic weather brought long droughts. New Taipei City had to enforce water restrictions when the Shihmen reservoir went dry in April. All cities along coasts or rivers have engineered means to remove excess water and to prevent flooding. Few have the means to sustain themselves in severe droughts.

Meanwhile In India, It Is So Hot The Roads Are Melting, “One Billion People Impacted”

Meanwhile In India, It Is So Hot The Roads Are Melting, “One Billion People Impacted”

While we patiently await Wall Street’s weathermen, formerly known as economists, to blame the next swoon in US GDP on California’s relentless drought, now in its fourth year, we wonder how many double seasonally-adjusted, pro-forma, non-GAAP GDP points India’s blistering heatwave will bring. Because if California thinks it has it bad, India has it far worse.

According to the National Post, soaring summer temperatures in India have left more than 1,400 people dead over the past month, officials said Thursday. Most of the 1,412 heat-related deaths so far have occurred in Andhra Pradesh and neighbouring Telangana, where temperatures have soared up to 47 C, according to government figures.

AccuWeather described India’s scorching weather as the most intense heat wave in India in recent years, adding that “a very active typhoon season, combined with drought in much of India, could have a significant impact on lives and property for more than a billion people in Asia during the summer of 2015.”

“The rains which have eluded us for the last couple of years have created serious drought conditions,” said state minister K.T. Rama Rao in Telangana, which was carved out of Andhra Pradesh as a separate state just last year.

India’s response to the stifling heat? In line with that of the Greek government and stockholders everywhere in the new normal: hope.

“This is unprecedented … so there is a little bit of panic,” he said. “Hopefully the monsoon will be on time. Hopefully we will receive rain very, very soon.”

For the locals it’s no laughing matter: “If I don’t work due to the heat, how will my family survive?” said construction worker Mahalakshmi, who earns a daily wage of about $3.10 in Nizamabad, a city about 150 kilometres north of the state capital of Hyderabad.

Other examples of just how bad it is: