The US Two-Tier Monetary System that Ended in 1971

The US Two-Tier Monetary System that Ended in 1971

QUESTION: You said the US had a two-tier monetary system under Bretton Woods. Can you explain that one, please?

ANSWER: When Roosevelt confiscated gold, he created, in reality, a two-tier monetary system quite frankly as the medieval city of Florence. The Great Financial Panic of 1344 was when the value of silver rose dramatically blowing out the silver/gold ratio. Silver was used locally for the normal people. Their wages were paid in silver. The gold florin was used for international trade and companies had to keep actually two sets of books with accounting in each separate currency. 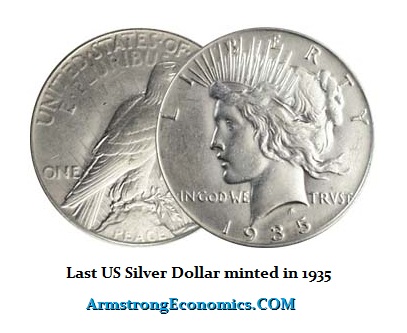 When Roosevelt confiscated gold, he devalued the dollar from $20.67 per ounce of gold to $35. Gold remained the unit of account for INTERNATIONAL transactions. While the last silver dollar was at first still minted, it was decided to end that production as well. Therefore, the last U.S. silver dollar to be struck was that of 1935. Nonetheless, the government then maintained silver as a backing for the currency domestically and issued Silver Certificates until 1963.

When the price of silver was rising with just about all other commodities during the early 1960s, the pressure was mounting on the financial system. President Kennedy authorized the abandonment of silver as a backing for the currency. He allowed the silver certificates to be redeemed for silver bullion. However, the minimum lot accepted for redemption was 5,000 for this was the size of the silver bars.

Therefore, in 1963 is when we see the beginning of the end in the two-tier monetary system. Between 1964 and 1971, the gold standard remained intact until President Nixon was forced to close the gold window ending the convertibility of dollars to gold internationally.