Everyone’s A Conspiracy Theorist, Whether They Know It Or Not

Everyone’s A Conspiracy Theorist, Whether They Know It Or Not

Plutocratic propaganda outlet MSNBC has just run a spin segment on the breaking news that the medical examiner’s determination of the cause of Jeffrey Epstein’s death is “pending further information”.

“Our sources are still saying that it looks like suicide, and this is going to set conspiracy theorists abuzz I fear,” said NBC correspondent Ken Dilanian. “NBC News has been hearing all day long that there are no indications of foul play, and that this looks like a suicide and that he hung himself in his cell.”

Dilanian, who stumbled over the phrase “conspiracy theorists” in his haste to get it in the first soundbyte, is a known asset of the Central Intelligence Agency. This is not a conspiracy theory, this is a well-documented fact. A 2014 article in The Intercept titled “The CIA’s Mop-Up Man” reveals email exchanges obtained via Freedom of Information Act request between Dilanian and CIA public affairs officers which “show that Dilanian enjoyed a closely collaborative relationship with the agency, explicitly promising positive news coverage and sometimes sending the press office entire story drafts for review prior to publication.” There is no reason to give Dilanian the benefit of the doubt that this cozy relationship has ended, so anything he puts forward can safely be dismissed as CIA public relations.

When I mentioned Dilanian’s CIA ties on MSNBC’s Twitter video, MSNBC deleted their tweet and then re-shared it without mentioning Dilanian’s name. Here is a screenshot of the first tweet followed by an embedded link to their current one (which I’ve archived just in case): 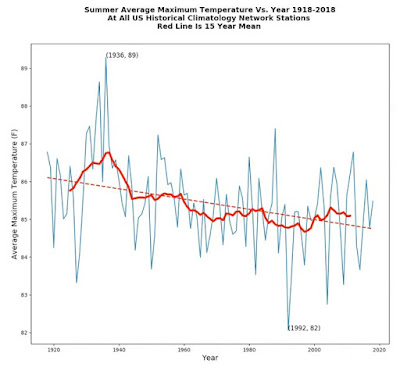 The figure above, showing a cooling trend in the United States, was posted by Steven Goddard (aka Tony Heller) on his blog with the remarkable title of “The Deplorable Climate Science Blog” (actually there is a slightly different one on the blog, right now, but it is simply a difference in the smoothing procedure).

So, this August, Mr. Tony Heller, writing under the pen name of Steven Goddard, published on his blog the graph you see above, showing a clear cooling trend in the United States. Make no mistake, these are real data, or so they are said to be. And they do show that summers have been cooling. But what about heat waves we are experiencing nowadays? Just an impression, apparently, because the data say otherwise. Then, what about global warming? An illusion, probably a fraud.

The graph is having a certain diffusion in the social media. An earlier version was even picked up by James Delingpole in his Breitbart news site. It quickly became a growing meme, scoffed or cheered depending on the attitude of the people commenting on it. As usual, the debate on climate on the social media is little more than a shouting match. It took some work by an expert, Tamino, on his “Open Mind” blog to dissect the story of this graph and show the tricks behind it. Tamino’s whole post is reproduced below.
…click on the above link to read the rest of the article… We live in a world with an incredible imbalance of power. Whether you believe in ‘conspiracies’ or not, there is no doubt that a tiny fraction of the world population has the means to manipulate and sway public opinion in order to maintain a paradigm that promotes and maintains their ability to control and profit off the masses. Common sense would dictate that any group who had the wherewithal to successfully claw their way into a top position would naturally invest heavily in ensuring their interests were protected. As increasing corruption is exposed in so many areas of society, we would be naive to think collusion wasn’t happening at the highest levels as well.

For instance… Recently a German journalist, Udo Ulfkotte, came forward to expose how he and, according to his claims, many other journalists were coerced into not only slanting their stories in order to sway public opinion, but to sign their own names to articles that were written by CIA staff as a means to garner support for war. (see video.)

A retired U.S. Army Colonel, Lawrence Wilkerson, who worked as national security advisor to the Reagan administration and both Bush administrations, recently shared about what he perceives as the corruption inside the establishment and how corporate interests are driving foreign policy. (see video.)

The more we look into it, the clearer it becomes that mainstream wisdom is not as benign, logical, sound or reasonable as it initially appears. Propaganda today is so highly sophisticated, outrageously pervasive, and incredibly subtle and cunning, that it can be difficult not to fall prey to its influences.

It’s a Recession: Now, Who’s Hurting and Where?

It’s a Recession: Now, Who’s Hurting and Where?

We asked economists from coast to coast to see how Canada is weathering the storm.

Canada earned official recession status yesterday, a fact that pundits and politicians on the campaign trail wasted no time trying to spin.

Reacting to the news, the Conservatives played up the fact that the economy improved this quarter over last — though party leader Stephen Harper refused to utter the word “recession” at media stops in Ontario.

“If you look at the data over the last year, you actually see growth in 80 per cent of the economy,” Harper said. “That is the reality of the situation.”

Meanwhile, opposition parties tried their best to make Harper look like he doesn’t know a calculator from the five fingers on his right hand.

One thing is for certain: it can take more than seven hours to fly across Canada, and the economies you would pass over are not the same.

So, to save you some airfare and lost luggage, The Tyee spoke to economists from coast to coast to see how the recession is affecting different parts of the country.

It’s not a surprise that Canada has entered a technical recession, according to economist Mike Moffatt at the Mowat Centre, an independent think-tank in Toronto — but it is bizarre.

Lies You Will Hear As The Economic Collapse Progresses

Lies You Will Hear As The Economic Collapse Progresses

It is undeniable; the final collapse triggers are upon us, triggers alternative economists have been warning about since the initial implosion of 2008. In the years since the derivatives disaster, there has been no end to the absurd and ludicrous propaganda coming out of mainstream financial outlets and as the situation in markets becomes worse, the propaganda will only increase. This might seem counter-intuitive to many. You would think that the more obvious the economic collapse becomes, the more alternative analysts will be vindicated and the more awake and aware the average person will be. Not necessarily…

In fact, the mainstream spin machine is going into high speed the more negative data is exposed and absorbed into the markets. If you know your history, then you know that this is a common tactic by the establishment elite to string the public along with false hopes so that they do not prepare or take alternative measures while the system crumbles around their ears. At the onset of the Great Depression the same strategies were used. Consider if you’ve heard similar quotes to these in the mainstream news over the past couple months:

John Maynard Keynes in 1927: “We will not have any more crashes in our time.”

H.H. Simmons, president of the New York Stock Exchange, Jan. 12, 1928: “I cannot help but raise a dissenting voice to statements that we are living in a fool’s paradise, and that prosperity in this country must necessarily diminish and recede in the near future.”

Irving Fisher, leading U.S. economist, The New York Times, Sept. 5, 1929: “There may be a recession in stock prices, but not anything in the nature of a crash.” And on 17, 1929:“Stock prices have reached what looks like a permanently high plateau. I do not feel there will be soon if ever a 50 or 60 point break from present levels, such as (bears) have predicted. I expect to see the stock market a good deal higher within a few months.”

Spin Cycle: Will all of the oilsands be developed?

Spin Cycle: Will all of the oilsands be developed?

“A lot of the oilsands oil may have to stay in the ground.”

Alberta’s oilsands seem to always be a contentious issue both nationally and internationally. It was likely only a matter of time before it became a hot topic on the federal campaign trail. Comments by an NDP candidate for the riding of Toronto Centre are causing a stir and putting the spotlight on Alberta’s bitumen.

Linda McQuaig, a well-known author and journalist, told a panel discussion on CBC News Network’s Power & Politics Friday that for Canada to meet its climate change targets much of the oilsands may have to be left in the ground.

McQuaig didn’t mention any specific climate change targets that Canada has pledged to achieve, but instead spoke about reaching Canada’s future environmental goals.

“We’ll know that better once we properly put in place a climate change accountability system of some kind,” she told host Rosemary Barton. “And… once we have a proper review process for our environmental projects like pipelines.”

The Conservatives wasted no time in jumping on the NDP and claiming the party wants to shut down the oil industry and introduce new taxes. Conservative Leader Stephen Harper accused the NDP of having a “not-so hidden agenda,” saying it “is consistently against the development of our resources and our economy.”

McQuaig’s comments spurred Michelle Rempel, Conservative candidate for Calgary Nose Hill, to accuse the NDP of proposing a moratorium on the oilsands, which would kill jobs at a time of instability in the oil sector.

Through the last decades, as we have been getting ever more occupied trying to be what society tells us is defined as successful, we all missed out on a lot of changes in our world. Or perhaps we should be gentle to ourselves and say we’re simply slow to catch up.

Which is somewhat curious since we’ve also been getting bombarded with fast increasing amounts of what we’re told is information, so you’d think it might have become easier to keep up. It was not.

While we were busy being busy we for instance were largely oblivious to the fact the US is no longer a beneficial force in the world, and that it doesn’t spread democracy or freedom. Now you may argue to what extent that has ever been true, and you should, but the perception was arguably much closer to the truth 70 years ago, at the end of WWII, then it is today.

Another change we really can’t get our heads around is how the media have turned from a source of information to a source of – pre-fabricated – narratives. We’ll all say to some extent or another that we know our press feeds us propaganda, but, again arguably, few of us are capable of pinpointing to what extent that is true. Perhaps no big surprise given the overdose of what passes for information, but duly noted.

So far so good, you’re not as smart as you think. Bummer. But still an easy one to deny in the private space of your own head. If you get undressed and stand in front of the mirror, though, maybe not as easy.