Russia and Turkey have announced that the two countries have reached significant progress in reviving the November 2014-shut down South Stream gas pipeline intended to land Russian gas across the Black Sea. The project is the part of the already secured open tender contracts for purchases of gas signed between Gazprom, Bulgaria, Serbia, Hungary, Slovakia and Austria. 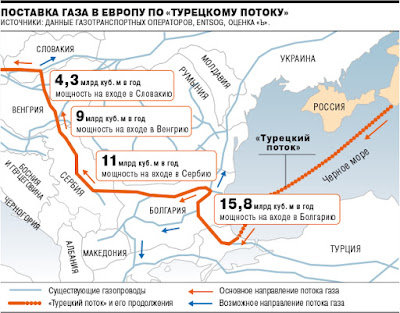 The new Black Sea gas pipeline Turkish Stream will run under sea from Krasnodar to a landing hubv just west of Istanbul. On November 19, presidents Vladimir Putin and Recep Tayyip Erdogan met in Istanbul to announce the completion of pipeline’s off-shore section.

Pipeline capacity is for 30 bullion cubic meters, bcm, although initial phase capacity will be closer to 17bcm (the first pipe). Currently, Gazprom supplies the above volume (30bcm) to Turkey (ca 16bcm), Bulgaria, Serbia, Slovakia, Hungary and Austria. Turkish market has been supplied via Blue Stream pipeline, and the other countries are supplied via Ukraine.

Based on reports from Russia’s Kommersant (https://www.kommersant.ru/doc/3806415), Gazprom has managed to achieve two feats:

Significantly, the tenders were secured in compliance with the EU Energy Directives. This means that Gazprom latest venture has addressed the main cause of the EU’s original objections to the same pipeline prior to 2014. In the case of open tenders process, Gazprom used exactly the same scheme to secure capacity orders for its Nord Stream 2 pipeline to Germany, Czech Republic and Slovakia back in 2017.