Has financial disaster been averted in Canada’s oil and gas industry?

‘Disaster’ is all relative. Let’s just say 2019 is going to be a difficult year following a tough set of recent circumstances.

One thing we know is that the recent episode of bargain-basement commodity prices—triggered by a regional glut of oil and gas looking for a pipeline to call home, combined with low international oil prices—has wounded this year’s outlook for conventional oilfield activity. That’s the segment of the business, outside the oil sands, where two-thirds of the industry’s spending typically occurs.

Beyond the tight orbit of Fort McMurray’s oil sands, in the broader oil and gas fields of BC, Alberta and Saskatchewan, the overt indicator of sectoral health is drilling activity. Like counting cars on a freeway, you know the economy is bad if there are only a few commuters on the road.

It’s looking pretty bad for the first quarter. We’re entering the peak ‘rush hour’ of the winter drilling season with only 180 bits turning on active rigs. The level of activity is feeling a lot like the depths of 2016, the lowest New Year’s entry in decades (see Figure 1). 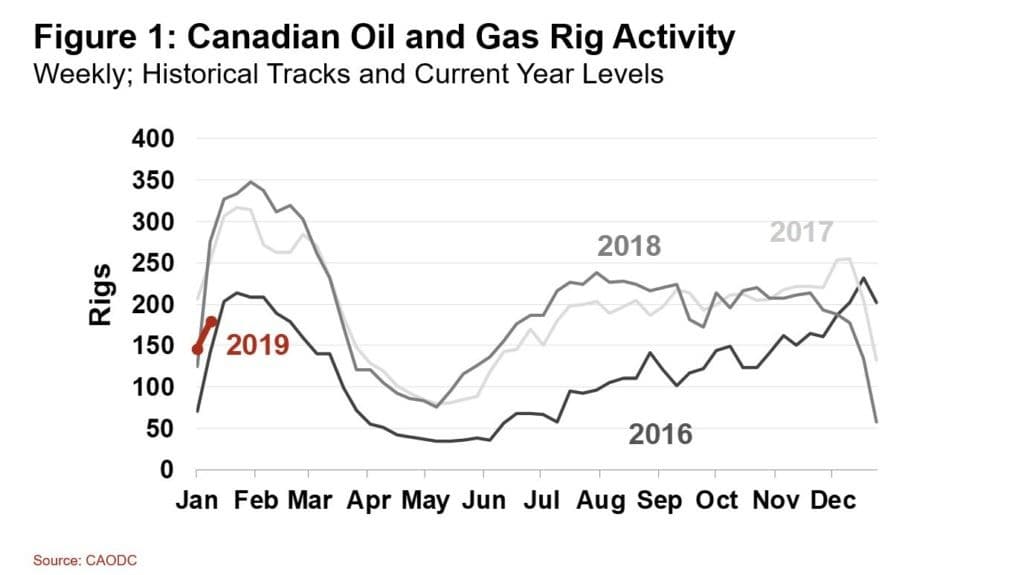 For comparison, last year at this time the rig count was climbing toward a more stable February peak of 348. But stability is hardly in the energy dictionary right now. Volatile discounts, weak international prices, illiquid equity markets and a never-ending pipeline drama has spooked those with money and hollowed those without. It’s pretty simple really: No confidence plus no money equals no drilling. That’s what was happening late last year.

Having said that, the very real potential for fiscal disaster was averted. To clear the late ’18 production glut, the government of Alberta stepped into the market with a mandatory oil curtailment (8.7 percent across the board).

The Myth Of An Imminent Energy Transition

The Myth Of An Imminent Energy Transition

100 million. It’s a number that drowns comprehension; it’s more jelly beans than can fit in an average-sized swimming pool.

Within a year, world oil consumption will top 100 million barrels of oil per day. Over the same time period, close to 100 million new piston-firing vehicles will be bought by petroleum-thirsty customers.

I hate to say it, but any notion of imminent “energy transition” or “decarbonization” is folly.

In fact, the percentage of fossil fuels in the world’s energy mix—coal, oil and natural gas—is still lingering well above 80 percent, a figure that has changed little in 30 years. That remains so, despite being challenged by serious environmental policies, financial pressures, viable alternative systems, public awareness and social activism.

It’s true that wind and solar are being deployed quickly, at an exponential rate in fact. But impressive as it all is, renewable energy installations are far too slow to catch the still-hardy appetite for fossil fuel consumption. Such energy obesity is not virtuous, but it’s a fact needing acknowledgement in a world of over seven billion people, each of whom are wanting for more light, heat, mobility and a panoply of mostly useless gadgetry.

Oil and gas are growing especially fast. Recently published data reminds us that we’re consuming hydrocarbons faster than ever, at robust rates on a global absolute basis (see Figure 1). Market share for oil and gas is holding steady at just under 60 percent. Related: Is Russia About To Abandon The OPEC Deal? 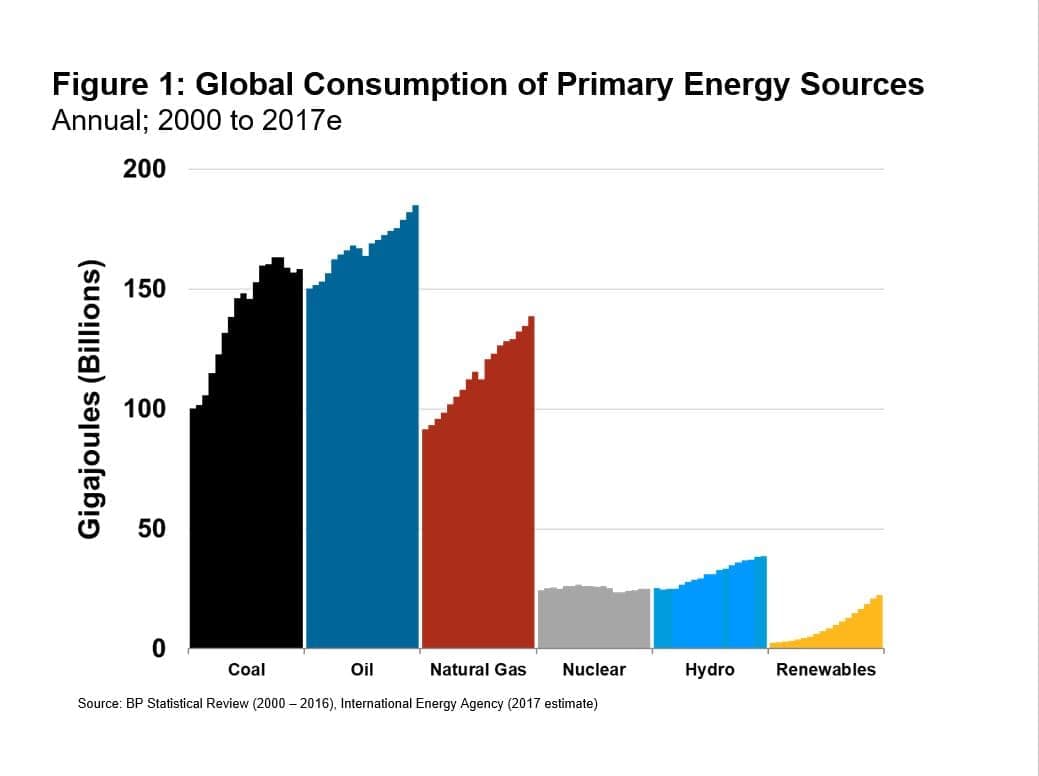 The resilience of fossil fuels is sobering, even after massive capital assault.

Over the past decade, the world has spent US$ 3.0 trillion on renewable energy, according to the International Energy Agency (Figure 2). For that expenditure, the clean cadre has taken a couple of points of share away from coal, the black stuff that seems to have nine lives (Figure 3). 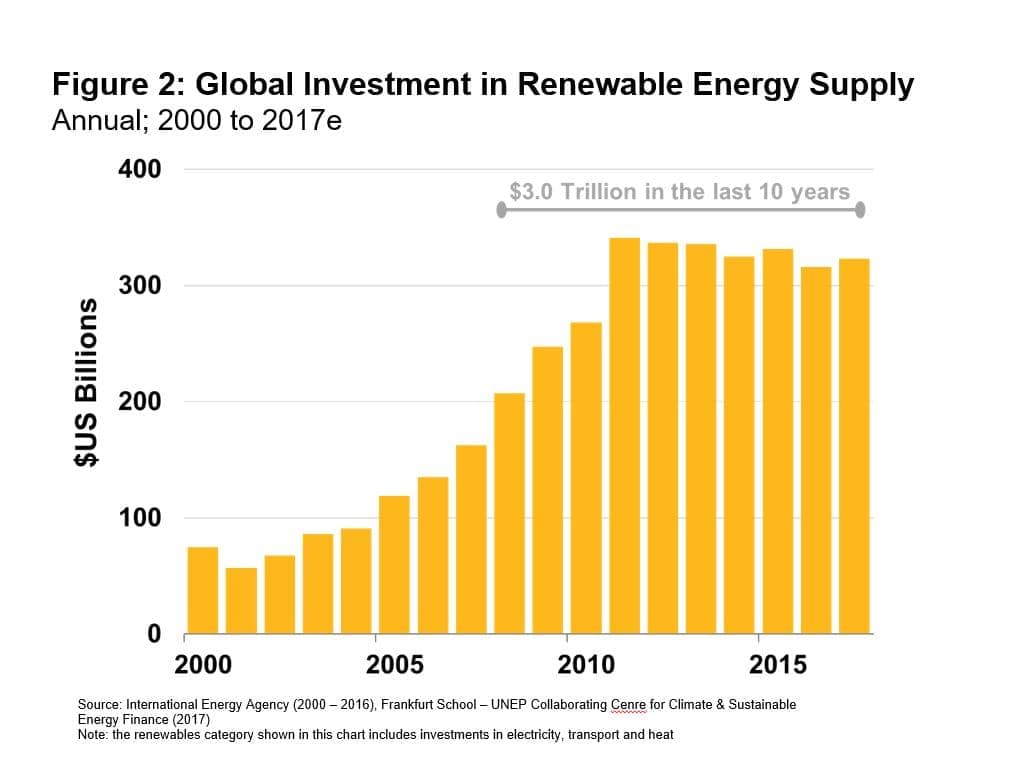 Last week, the first salvo of a global trade war was fired: US tariffs on steel and aluminum.

Like the “shot heard round the world,” the American protectionist move has politicians and economists in industrialized nations strategizing with their spreadsheets. From Porsches to prosciutto, every country is scouring trade numbers to see what can be tit for tat in the event of all-out global trench digging.

Canadian industries, on the other side of the bridge from where the shot was fired, have their helmets on. The volley is a prod to put all things we peddle—and to whom we peddle to—into perspective.

Steel, for instance, has much in common with oil, natural gas and petroleum products businesses. Both are products sourced from a plentiful domestic endowment of resources — iron ore and hydrocarbons. Both fight for market share in a fiercely competitive global market. Both have long been vulnerable to the vagaries of government policy. Both are hugely important to their provincial economies, Ontario and Alberta respectively. And both are dominantly exported to the United States.

But that’s where the comparisons end. We sell a lot more barrels of oil than rolls of steel.

Sifting through the eye-rubbing data tables on the Statistics Canada website, exports of “iron, steel and articles thereof” in 2017 were $14.0 billion. About 86 percent of those exports were sold to the United States. Aluminum and articles thereof was $12.6 billion. It’s not clear which product sub-classifications, if any, may be subject to US tariffs. Nor do we know if nuts, bolts, fence posts, and other value-added articles thereof will be included. But let’s assume everything is thrown into the Trumpian blast furnace.

By comparison, exports of Canada’s oil, gas and petroleum products last year—during a period of depressed prices—were almost $107 billion, 91 percent of which went south of the border.

Crude oil has a northerly wind in its sails, though everybody on board this fickle ship is cautious about its compass bearing. Since 2013 we’ve seen the price of a barrel peak to $110, capsize to $26, and roll back to $60.

Here is what we’ve learned over the past decade:

Under $40 is too low. Cash flows dry up and investors jump ship. Rigs head back to their yards with drooping masts. Costs deflate, rapidly decimating employees and equipment in the service industry. Production begins to decline in marginal regions. State-owned enterprises are unable to pay their ‘social dividends’. On the consumption side, conservation and efficiency lose meaning; consumers revert to guzzling oil like free refills of coffee.

So, simplistically a mid-range price of $US 60/B should represent what oil pundits call “market balance.” It’s the elusive price point where daily consumption is equal to production; inventory levels are neither too low nor too high; and economists’ cost curves intersect with demand.

Yet, if there is one thing 160 years of the oil age teaches us, there is no such thing as a mid-range balancing point in oil markets. Everyone either rushes to one side of the ship or the other, almost always at the wrong time.

It’s that time of year when we flip our calendars to a new start.

For pundits like me, it’s customary to make a listicle about the year to come – the usual predictions about things like OPEC, energy consumption, commodity prices and electric vehicle sales in China. But I decided to fold from that no-win game a while back.

In this age of disruption, there are too many unknowns to honestly predict what will happen next week, let alone 52 of them into the future. So instead of predicting outcomes, I’ve decided to list the top eight unknowns in energy markets for 2018

Barrel traders recently pushed the price of West Texas Intermediate (WTI) oil above $US 55; the first time in over two years.

Scarcity doesn’t really justify the upward price movement. There isn’t a shortage of oil in the world. But there could be, in the worst case, if missiles start flying between two of the world’s largest oil players: Saudi Arabia and Iran.

Maybe it won’t happen. But maybe it will. And that’s what the “geopolitical risk premium” is all about. It’s an anxiety surcharge that’s tacked onto every barrel of oil, in fear of supply disruption on a moment’s notice. And the fear is back.

After three years of naivety we’re back to acknowledging the known unknowns of the Middle East, the uncertainties that strap a 10-to-20 percent premium on the price of a barrel.

Paying a risk premium for oil is nothing new. It’s been around for decades and has gone up and down with the hostility thermometer of the Middle East.

Unusually, the pricing of risk dropped to zero around 2015. Three main reasons prompted a sense of world peace: the promise of the Iranian nuclear deal; a feeling that booming oilfields in Texas could offset any disruption; and a growing surplus of oil inventories in storage tanks around the world.

Of late, the notion of oil obsolescence has also perpetuated a feeling of nonchalance. “Who cares about the Middle East and their oil?” has been a question driven by the utopian narrative: “I’m not worried, everyone will be driving electric cars in a few years anyway.”

But it’s all been a false sense of security.

“End Of Oil” Narratives Are Misleading

“End Of Oil” Narratives Are Misleading

The world isn’t reinventing the wheel. But we are changing how it turns, who it carries and where it’s going.

Over the next few decades we’ll be plugging in more cars, hailing and sharing them, and reminiscing about the good ol’ days of the steering wheel.

To be sure, these looming mobility changes are all exciting and impactful. But none of these nascent trends extrapolate easily into a narrative about “the end of oil,” a disruptive displacement of the fuel everyone loves to hate.

In fact, whichever way you cut the spreadsheets, the numbers are pointing in the opposite direction. By 2030, less than 15 years from now, I expect around 400 million more internal combustion engines will accumulate into the global fleet of passenger cars – even after assuming that EV market penetration is accelerated with the heavy-handed help of governments around the world.

Here is an indication of the scale of vehicle accumulation: So far this year, to the end of September, over 70 million vehicles with internal combustion engines have been sold worldwide. Every new vehicle that’s sold lingers in the fleet.

Simplistic assumptions and analogies abound. A petroleum-powered vehicle is not like a cheap DVD or videocassette that gets pitched out the minute you buy a Netflix subscription. A car already on the road is an expensive asset –most often financed with debt – that’s put to work for as long as possible by a string of owners. What’s under-appreciated is that most oil-burning vehicles will resist going to the scrap yard, due to their stubborn and improving reliability (see my column Old Pistons Die Hard from October 16th.)