Hurricane Michael destroyed entire towns. The electric grid won’t need to be restored, it will need to be rebuilt.

#Florida primer on this thread just so those outside state understand a little bit about NW part of the state. It is a place we fell in love with as a family years ago & have spent many long weekends enjoying #Sayfie:

Panama City is a vibrant seaside city. Popular vacation spot for both families & college students. Early reports from locals is catastrophic devastation. As it was described to me, the electric grid won’t need to be restored, it will need to be rebuilt. #Sayfie

Destruction for Miles and Miles

​Search and Rescue Begins Amid Ruins of Florida Coast

Some people elected to ride the hurricane out.

That was not a good move. At least six are dead. More will come.

A Search and Rescue Effort Begins amid ruins of Florida Coast.

Search-and-rescue teams rushed on Thursday to reach communities that Hurricane Michael leveled, hoping to find survivors of the powerful storm after its rampage through the Florida Panhandle and beyond left buildings collapsed and splintered, hospitals damaged, roads and water systems compromised and more than a million homes and businesses without electricity.

Although it was clear by afternoon that the storm had caused widespread damage, some areas remained largely cut off, and the authorities were trying to deploy rescuers by helicopter and boat.

“I Have No Words”: Aerial Footage Shows Trail Of Devastation Left By Hurricane Michael

“I Have No Words”: Aerial Footage Shows Trail Of Devastation Left By Hurricane Michael

“Today is a big day for us when it comes to helping people,” said Long during the Thursday morning press briefing, adding “Power is not going to be on for a while.”

The latest developments, per the New York Times:

• At least four deaths were linked to the storm in Gadsden County, west of Tallahassee, according to Lt. Anglie Hightower, a spokeswoman for the sheriff’s office. The victims included a man who died when a tree crashed down on his home in Greensboro.

• An 11-year-old girl, Sarah Radney, was killed on Wednesday when a carport was torn away and was sent hurtling into the modular home she was in, said Chad Smith, the coroner of Seminole County, Ga. “She was sitting right next to her grandmother,” said Mr. Smith, who described the girl’s death as a “horrible accident.”

• Emergency officials rushed to evacuate more than 300 patients from storm-damaged hospitals in Panama City. In total, four hospitals and 11 nursing facilities were closed in Florida. A nursing facility in Georgia was also closed.

• Much of the coast of the Florida Panhandle, including parts of Panama City and Mexico Beach, was left in ruins. The area is dotted with small, rural communities, some of them among the poorest in the state. Evacuation was difficult.Read more about how the storm was hard on people without the means to evacuate.

“A Once In A Lifetime Event”: Michael Will Be The Strongest Hurricane To Hit US In 14 Years

“A Once In A Lifetime Event”: Michael Will Be The Strongest Hurricane To Hit US In 14 Years

Update (9 am ET): Hurricane Michael continued to strengthen Wednesday morning, as the Category 4 storm’s wind speed increased to 145 mph. The storm is now poised to be the strongest to hit the US in 14 years, boasting a life threatening storm surge and the potential to cause $16 billion in damages.

The storm is now roughly 90 miles southwest of Panama City and is heading north at 13 miles per hour, according to the NHC’s latest update. The storm’s outer bands are already battering the coastal town of Apalachicola with winds of nearly 50 mph. 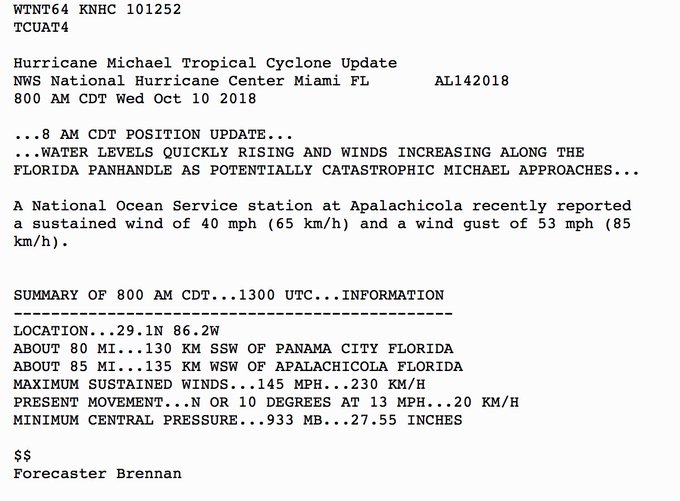 Here is the 8 AM CDT position update for #Michael – water levels are rising and winds increasing along the Florida Panhandle as potentially catastrophic #Michael approaches.

As it stands, the storm is also poised to be the strongest to hit the Florida panhandle and big bend since meteorologists first started gathering data. Regional ports have closed in anticipation, and more than 230 flights have been canceled. Duke Energy Corp., a utility that supplies electricity to the region, expects more than 200,000 customers in the state will be without power. In preparation for the widespread outages, local utilities have about 19,000 workers on stand by ready to work to quickly restore power, with more workers pouring in from out of state. Still, some areas are expected to be without power for more than a week, per the Daily Commercial.

“A storm like this could be a once-in-a-lifetime event,” said Brett Rathbun, a meteorologist with AccuWeather Inc. in State College, Pennsylvania. “Winds of this intensity can really knock down any tree or structure in its path.”