Preface. Peak conventional oil, which supplies over 95% of our oil, may have peaked in 2008 (IEA 2018) or 2018 (EIA 2020). We are running out of time. And is it really worth building these small modular reactors (SMR) given that peak uranium is coming soon? And until nuclear waste disposal exists, they should be on hold, like in California and 13 other states.

And since trucks can’t run on electricity (When Trucks Stop Running: Energy and the Future of Transportation 2015, Springer), what’s the point? Nor can manufacturing be run on electricity or blue hydrogen (Friedmann 2019). Once oil declines, the cost to get uranium will skyrocket since oil is likely to be rationed to transportation, especially agriculture.

Engineers at NuScale Power believe they can revive the moribund U.S. nuclear industry by thinking small. Spun out of Oregon State University in 2007, the company is striving to win approval from the U.S. Nuclear Regulatory Commission (NRC) for the design of a new factory-built, modular fission reactor meant to be smaller, safer, and cheaper than the gigawatt behemoths operating today (Science, 22 February 2019, p. 806). But even as that 4-year process culminates, reviewers have unearthed design problems, including one that critics say undermines NuScale’s claim that in an emergency, its small modular reactor (SMR) would shut itself down without operator intervention.

NuScale’s likely first customer, Utah Associated Municipal Power Systems (UAMPS), has delayed plans to build a NuScale plant, which would include a dozen of the reactors, at the Department of Energy’s (DOE’s) Idaho National Laboratory. The $6.1 billion plant would now be completed by 2030, 3 years later than previously planned, says UAMPS spokesperson LaVarr Webb. The deal depends on DOE contributing $1.4 billion to the cost of the plant, he adds.

After the Arctic polar vortex brought temperatures in parts of Canada to record lows that, in some places, rivaled the temperatures on the surface of Mars (not to mention leaving nine people dead), the infamous Arctic air has notched another milestone: It has shut down a nuclear reactor due to an extremely rare phenomenon called ‘frazil ice’.

Never heard of frazil ice? Neither had we.

According to Bloomberg, Public Service Enterprise Group, shut a reactor early Thursday at unit at its Salem nuclear plant in southern New Jersey after screens on its intake froze over, restricting the flow of water needed to cool off the reactor, according to spokesman Joe Delmar.

A second unit at a station on the Delaware river was temporarily closed for the same reason.

The 60-foot-tall intake screens help guard the reactor against debris like floating wood. But Under extreme conditions (like those witnesses this week), overnight low temperatures at the station can fall into the single digits (or lower), creating frazil ice – small crystals of frozen mist – which can collect on the screens, thicken, and form a cement-like coating that completely blocks the flow of water into the reactor, causing circulators to shut down.

“We had the heaters running, we had folks out there, and we lost the four circulators within five minutes,” Delmar said. He wouldn’t say when Salem 2 is expected to go back into service.

The last time the Salem unit was shut for frazil ice was in 2010. Regular ice formations typically don’t completely block off the flow of water, but because of the frazil ice’s ability to make the reactor completely inaccessible, operations must be shut down.

Construction of a new nuclear reactor in Flamanville, France, is already six years behind schedule. Image: schoella via Wikimedia Commons

The economics of nuclear power in Europe are in meltdown, leaving taxpayers facing a heavy burden as the industry clings to pledges of huge public cash injections.

LONDON, 21 March, 2016 – The deeply troubled European nuclear industry, dominated by the huge French state-owned company EDF, home is now surviving only because of massive public subsidies from the French, British and Chinese governments.

The depth of the financial problems that EDF is facing was underlined last week by the resignation of its finance director, Thomas Piquemal.

He believes that building the world’s most expensive nuclear power plant – at Hinkley Point in southwest England – could threaten the viability of the group, whose finances are already stretched to breaking point, and so he decided he would leave.

Within days, both the UK prime minister, David Cameron, and the French president, François Hollande, pledged to support the building of the £18 billion plant, despite the fact that the economies of the project look disastrous.

They did so in response to a letter from EDF chief executive Jean-Bernard Levy, which said the project could not go ahead without a massive injection of new capital by the French government.

Immediately, Emmanuel Macron, the French economy minister, made it clear that EDF would be bailed out. He dismissed concerns in both countries about the high cost of the project and signalled the French government’s willingness to prop up EDF to enable it to complete the job, whatever it took.

(ANTIMEDIA) Biscayne Bay, FL —According to a study released by Miami-Dade County Mayor Carlos Gimenez on Monday, the waters of Biscayne Bay measured 215 times the level of radioactive tritium as is found in normal ocean water.

Tritium is a radioactive isotope traceable to nuclear plant cooling tower operations. In this case, the leakappears to be emanating from the aging canals in the Turkey Point Nuclear Generating Station located nearby.

“This is one of several things we were very worried about,” said South Miami Mayor and biological sciences professor, Philip Stoddard, as the Miami New Times reported. “You would have to work hard to find a worse place to put a nuclear plant, right between two national parks and subject to hurricanes and storm surge.”

Biscayne Bay harbors one of the largest coral reefs on the planet and is situated near the Everglades. Hot, salty water from the canals appears to be flowing back into both national parks, which has caused concern among environmentalists and others from the time Turkey Point planned to expand its reactors in 2013.

“They argued the canals were a closed system, but that’s not how water works in South Florida,” Stoddard remarked.

Tritium, a hydrogen isotope, is considered a precursor indication of leaks from nuclear plants, as it ‘travels’ or spreads faster than, and often precedes, other radioactive agents.

With all the action in Syria, the Ukraine is no longer a subject for discussion in the West. In Russia, where the Ukraine is still a major problem looming on the horizon, and where some 1.5 million Ukrainian refugees are settling in, with no intentions of going back to what’s left of the Ukraine, it is still actively discussed. But for the US, and for the EU, it is now yet another major foreign policy embarrassment, and the less said about it the better.

In the meantime, the Ukraine is in full-blown collapse – all five glorious stages of it – setting the stage for a Ukrainian Nightmare Before Christmas, or shortly after.

Phase 1. Financially, the Ukrainian government is in sovereign default as of a couple of days ago. The IMF was forced to break its own rules in order to keep it on life support even though it is clearly a deadbeat. In the process, the IMF stiffed Russia, which happens to be one of its major shareholders; what gives?

Phase 2. Industry and commerce are approaching a standstill and the country is rapidly deindustrializing. Formerly, most of the trade was with Russia; this is now over. The Ukraine does not make anything that the EU might want, except maybe prostitutes. Recently, the Ukraine has been selling off its dirt. This is illegal, but, given what’s been happening there, the term “illegal” has become the stuff of comedy.

Phase 3. Politically, the Ukrainian government is a total farce. Much of it has been turned over to fly-by-night foreigners, such as the former Georgian president Saakashvili, who is a wanted criminal in his own country, which has recently stripped him of his citizenship. The parliament is stocked with criminals who bought their seat to gain immunity from prosecution, and who spend their time brawling with each other.

General view of the operating power plant in Flamanville. © Benoit Tessier / Reuters
One of the reactors at France’s Flamanville Nuclear Power Plant has been shut down due to technical failure. No radiation leak has been reported, with the plant operator saying that the incident has had no impact on the environment or safety.

Employees of the nuclear power plant in Flamanville discovered a technical problem at the reactor number two on Tuesday at around 6:15pm. The pressurized water reactor was switched from the faulty main transformer to a backup, but on Wednesday the Electricite de France S.A. (EDF) decided to fully stop work of the reactor. 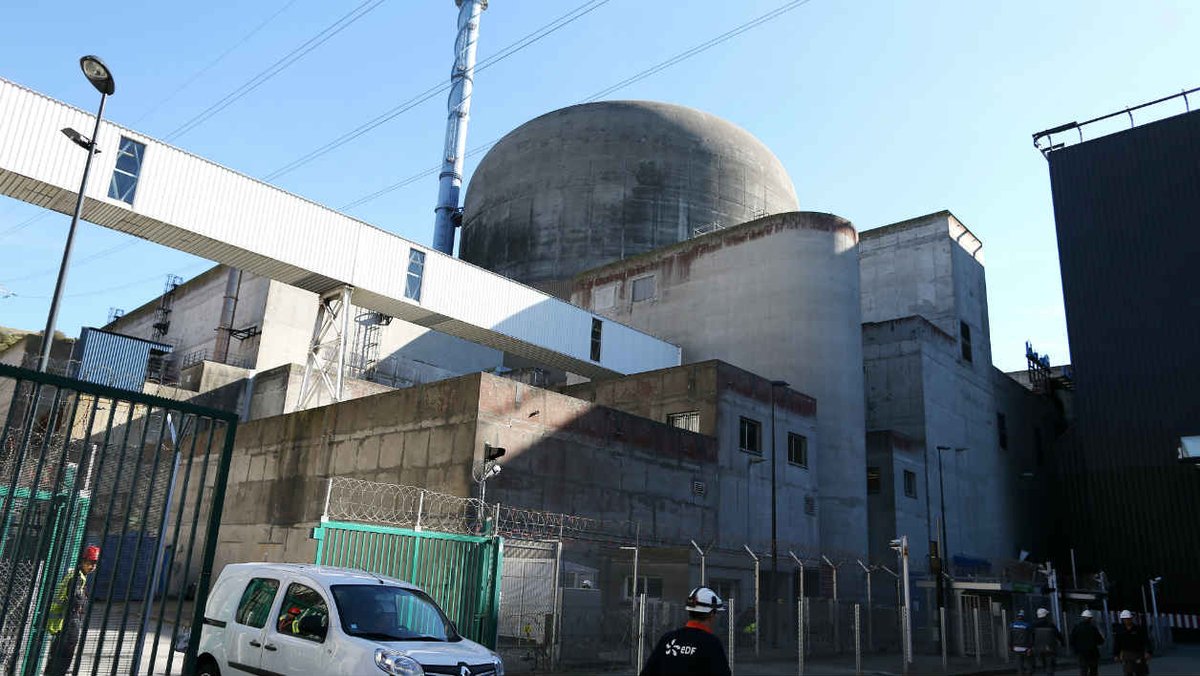 A preliminary diagnosis will be carried before proceeding to do maintenance work on the unit. No restart date has been announced, as the electric company is still examining the fault.

“This event has no impact on plant safety, or the environment”, EDF emphasized.

Flamanville Nuclear Power Plant is located at Flamanville, Manche houses two pressurized water reactors (PWRs) that produce 1.3 GWe each. The reactors, amounting to some 4 percent of France’s total nuclear generation, went into service in 1986 and 1987. A third, a €10.5 billion ($11.48bn) Areva European Pressurized Reactor, with a capacity of 1,650 MWe is currently being constructed on site.

France has 58 nuclear reactors operated by EDF with total capacity of 63.2 GWe. The country derives two thirds of its electricity from nuclear generation.

Beyond Iran And Pakistan: 7 Nuclear Wannabes

Beyond Iran And Pakistan: 7 Nuclear Wannabes

The meltdown at the Fukushima Daiichi nuclear complex in 2011 following the Japanese tsunami forced a major rethink of nuclear power as a safe form of electricity generation. As radiation from the plant spewed into the ocean and nearby communities following an immediate evacuation, the world reaction was swift and dramatic. Within days the spot price of uranium collapsed. Japan ordered the shutdown and maintenance of all its existing reactors. Germany, a major consumer of nuclear power, permanently closed 8 of its 17 nuclear reactors; other European countries shelved their nuclear plans.

While fear still lingers of a nuclear catastrophe on a similar scale as Fukushima, or earlier accidents such as Three Mile Island or Chernobyl, that hasn’t stopped a slew of countries from moving forward on plans to develop nuclear plants as an adjunct to existing power sources like hydro, coal, natural gas and good ol’ oil.

Especially in developing countries that lack access to fossil fuels, nuclear is seen as a viable and cost-effective form of baseload power.

Of course, these plans immediately arouse suspicions that nuclear power is being used as a ruse for developing nuclear weapons. The most obvious example is Iran, which already operates a large nuclear reactor – Bushehr 1 – but continues to engage in uranium enrichment despite a requirement by the United Nations Security Council to suspend such activities. Iran’s nuclear ambitions have resulted in U.S.-led sanctions and raised the opprobrium of Israel, which in turn has found itself at odds with the United States, particularly the Obama Administration, which seeks an accommodation with Iran.

A Spanish nuclear power plant was shut down following an electricity failure, local media reported late on Tuesday. Strong winds reportedly caused the blackout in the northeast of the country.

Strong winds in the area were reportedly behind the electricity shortage. The shutdown was automatic following the power outage. According to the plant: “All the safety systems worked as planned” and the there is currently no danger.

The plant has notified the CSN of the incident. The outage did not cause any harm to the environment or the plant’s workers, CSN said in a statement.

Once the power is restored, the plant will be back online.