Oil, Gas Drilling In Canada Set For A Decline

Oil, Gas Drilling In Canada Set For A Decline

Drilling for oil and gas in Canada will likely decline by 5 percent in 2019, the Petroleum Services Association of Canada has forecast, blaming pipeline capacity shortages and the resultant discount in Canadian heavy to the West Texas Intermediate benchmark for the outlook.

The PSAC said it expected oil and gas companies to drill 6,600 new wells next year, which would be down from 6,980 this year and the lowest number of new wells in three years. Yet over the year, drilling will increase, the PSAC forecast, as the volume of oil transported by rail, for lack of enough pipelines, continues to grow.

On the good news front, the discount at which Western Canadian Select trades to West Texas Intermediate is seen to narrow from the current over US$50 a barrel to about US$24.50 a barrel, with the average WTI price for 2019 projected at US$69 a barrel.

The National Energy Board of Canada recently released a report forecasting that oil and gas production will continue to increase while domestic consumption declines thanks to energy efficiency. Natural gas, along with hydropower and other renewable sources, will come to account for a bigger share of the country’s energy mix while oil production grows for exports.

In the next 20 years, NEB expects crude oil production to grow by as much as 58 percent while natural gas production expands by 33 percent, both helped by improving extraction technology that will maintain the industry’s competitiveness.

Not all believe, however, in this competitiveness. In fact, industry executives are quite disgruntled about the discount at which WCS is trading to WTI as well as by the high carbon taxes they are obliged to pay. The combination of factors has eaten into their bottom lines and will likely continue doing it as no new pipeline projects are coming on line any time soon and producers are forced to resort to costlier oil-by-rail options.

Conditions include consultation with First Nations 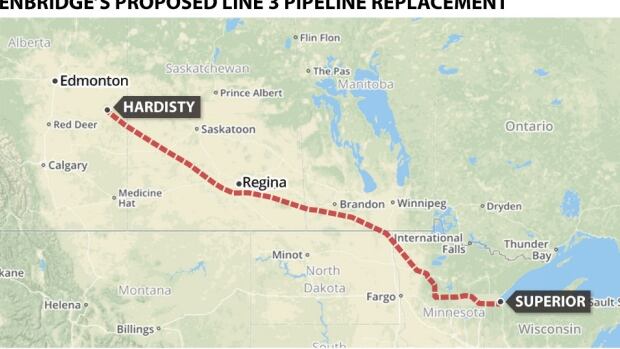 Enbridge is proposing to replace its Line 3 pipeline from Hardisty, Alta., to Superior, Wis. If approved, it will approximately double the amount of oil shipped daily. (Canadian Press)

The National Energy Board will allow Enbridge to replace an aging pipeline across the Prairie provinces as long as the company meets 89 conditions.

The federal government must now make a decision on the project.

Enbridge wants to spend $7.5 billion to replace its Line 3 pipeline, which stretches 1,660 kilometres from Hardisty, Alta., to Superior, Wis.

The pipeline is currently operating at about half capacity after the company voluntarily reduced pressure because of reliability concerns.

“The Enbridge Line 3 project is in the Canadian public interest and is not likely to cause significant adverse environmental effects,” said Robert Steedman, the NEB’s chief environmental officer.

As part of the NEB’s decision, Enbridge must develop a plan for Aboriginal groups to participate in monitoring construction.

Several groups oppose the pipeline project, including First Nations and environmental groups in Manitoba and Minnesota. The company has already delayed its expected completion date from 2017 to 2019 because of the regulatory process in Minnesota.

“The hearing panel believes there is an important opportunity at this juncture for Enbridge to renew, and in some cases, improve its relationship with Aboriginal groups,” said Steedman.

The project will be subject to the federal government’s new environmental assessment process, which was announced in January.

Line 3 already has presidential approval, but the replacement project must undergo separate permitting processes in the U.S. before construction can begin.

‘We can’t abide by the system any more. It’s too flawed,’ says former participant

Dozens of participants have dropped out of the controversial National Energy Board review of Kinder Morgan’s proposed Trans Mountain pipeline expansion, saying they can no longer support a “biased” and “unfair” process.

Thirty-five commenters and interveners, including the Wilderness Committee and the Canadian Parks and Wilderness Society, sent a letter to the board Wednesday announcing their immediate withdrawal.

“It’s a sad day. We do not like to fly in the face of regulatory processes,” said Wilderness Committee climate campaigner Eoin Madden in a phone interview. “But we can’t abide by the system any more. It’s too flawed.”

The news came as the energy board was to release its draft conditions for the pipeline expansion. Commenters have six days to respond to the conditions, which are legally required and do not mean the board has made a decision yet.

The latest departures are in addition to the earlier withdrawal of two other high-profile interveners. Economist Robyn Allan announced her exit from the “rigged” process in May, while former BC Hydro chief executive Marc Eliesen called it a “farce” when he pulled out last year.

Spokesperson Tara O’Donovan said the board was disappointed the participants had chosen to withdraw.

“As interveners and commenters in the process they had an opportunity to add their voice to the record, and work to influence the decision of the board,” she said in a statement.

The review includes about 400 interveners, who can provide evidence and testimony, and 1,300 commenters, who can submit letters. O’Donovan said the board will consider all submissions and it is committed to a thorough and fair environmental assessment.

The financial pages of Canadian newspapers have been full of headlines lately announcing the potential of two large shale oil fields in the Northwest Territories said to contain enough oil to rival the Bakken Formation of North Dakota and Montana.

The report by Canada’s National Energy Board (NEB) evaluated, for the first time, the volume of oil in place for the Canol and Bluefish shale formations, located in the territory’s Mackenzie Plain. It found the “thick and geographically extensive” Canol formation is expected to contain 145 billion barrels of oil, while the “much thinner” Bluefish shale contains 46 billion barrels.

The report did not estimate the amount of recoverable oil, but points out that even if one percent of the Canol resource could be recovered, that represents 1.45 billion barrels. The calculation immediately had reporters comparing Canol and Bluefish to the Bakken, where the latest USGS estimate shows 7.4 billion barrels of technically recoverable oil (this includes the Three Forks Formation underlying the Williston Basin straddling North Dakota, Montana, Saskatchewan and Manitoba).

“Northwest Territories sitting on massive shale oil reserves on par with booming Bakken field in U.S.,” enthused the Financial Post. “NEB and GNWT study finds 200 billion barrels of oil in the Sahtu,” gushed CBC News, referring to a region of the sprawling territory that cuts across three provinces and touches the Arctic Ocean.

‘My mind is clearly made up. I think this is a bad deal for Vancouver,’ he said after reading new report

The city commissioned expert reports on the potential impacts of the $5.4-billion proposal and the findings were presented to council on Wednesday.

“Today we heard overwhelming evidence that the Kinder Morgan pipeline proposal and the oil tankers associated with it are incredibly disastrous for Vancouver,” said Robertson outside council chambers after the meeting.

“My mind is clearly made up. I think this is a bad deal for Vancouver.”

The mayor entered a motion to reaffirm the city’s opposition to the project, but council agreed to defer the vote for two weeks after Coun. Elizabeth Ball requested more time to review the findings.

The National Energy Board is considering Kinder Morgan’s plan to triple its bitumen-carrying capacity to 890,000 barrels a day by laying almost 1,000 kilometres of new pipe near an existing line between Alberta and Burnaby, B.C.

The city submitted its expert evidence to the energy board on Wednesday, including critical reports on the project’s economic viability, risk assessment and potential spill impacts.

A Metro Vancouver-commissioned report on health and air quality concluded a spill could expose up to a million people to toxic benzene fumes and kill up to 100,000 birds.

The report said benzene, a component of diluted bitumen, can cause headaches, dizziness, nausea, respiratory problems, coma and even death. People on the Stanley Park seawall next to the water could suffer irreversible health effects, it said.