Brazil’s Senate has overwhelmingly approved a military intervention in Rio de Janeiro that was first proposed by President Michel Temer last week – the latest step in the president’s crackdown on crime and social unrest ahead of a hotly contested local election coming later this year.

As we noted last week, Temer is ordering the military to restore order in the drug-ravaged streets of Rio in the largest intervention since Brazil’s return to Democracy in the mid-1980s. A collapse in public spending on social services has caused crime to reemerge in Brazil’s slums, spiking to levels unseen since 2009.

The decree, which was issued on Friday, had already passed the House, and the Senate vote was the final obstacle to a military takeover of the local police. However, per the AFP, while support for the crackdown is broad-based, it also has its critics: There is particular controversy over government calls for the army-led police to be able to serve mass search and arrest warrants in favelas.

In fact, the prosecutor Deltan Dallagnol, who ran infamous anti-corruption operation car wash – which nearly ensnared Temer – said there’s no legal precedent or justification for such mass searches of favelas.

“The penal code does not authorize serving collective or generic search warrants. On the contrary, it demands the greatest possible precision in the homes being searched,” he tweeted.

Furthermore, there’s concern that the crackdown – which was inspired by a series of street robberies during Carnevale festivities in the city – will lead to abuse of the poorest most vulnerable citizens while doing little to address systemic problems like pervasive poverty and poor access to education.

However, the horrifying stories of the crime wave have helped rally popular support for the crackdown.

With public spending on police and social services collapsing amid Brazil’s worsening economic crisis, violent crime has crept back up in Rio de Janeiro, a city widely recognized for its favelas – urban hillside slums teeming with violence, drugs and prostitution, according to Bloomberg.

And ahead of an October election where President Michel Temer will try to win his first full term in office, the president is trying to send in the army to seize control of the city’s streets and restore order to an increasingly lawless town.

President Michel Temer issued a decree on Friday putting an Army general in charge of Rio’s security forces, including the state’s civilian police. The intervention, which requires congressional approval, will last until the end of the year, according to the decree.

“Our prisons will no longer be offices for thieves, our public squares party halls for organized crime,” Temer said after signing the decree.

But as is often the case with Brazilian politics, Temer has a plausible ulterior motive: By sending in the army, he might create enough of a distraction to avoid voting on an unpopular pension bill because Brazilian law conveniently prohibits making constitutional changes during times of military crisis.

Temer told Reuters that the intervention wouldn’t halt negotiations over pension reform or stop a vote on the plan, which is deeply unpopular with the country’s retirees, who stand to see their benefits cut.

Meanwhile, crime in the city has erased nearly a decade of progress, climbing back to its highest level since 2009. Temer’s decision is the first time the military has intervened in public affairs since the former military dictatorship ended in the mid-1980s and the country returned to democracy.

Update 2: Physical confrontation erupts in Brazil’s Congress between Temer’s supporters & opponents after he deploys the military against protesters. 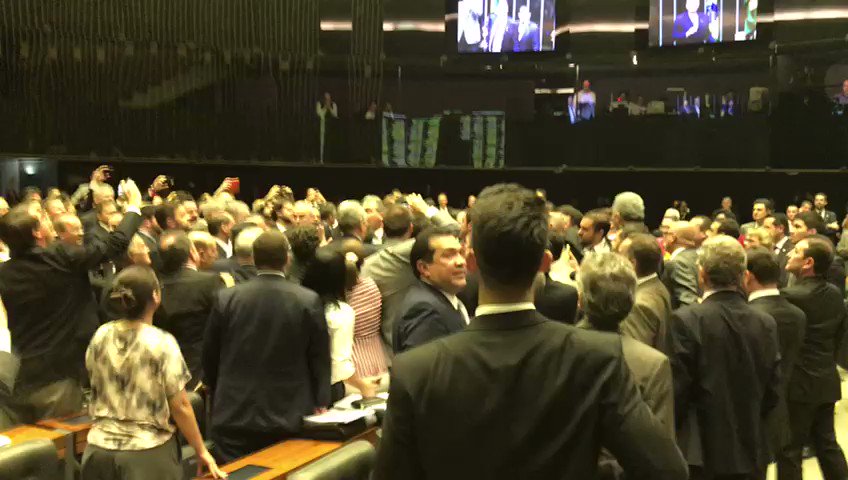 Amid massive protests demanding the ouster of Brazilian President Michel Temer, local riot police used tear gas and concussion grenades against groups of violent protesters in the Brazilian capital, where according to GloboNews protesters set fire to several ministry buildings on Wednesday afternoon, as tens of thousands gathered outside Congress.
View image on Twitter 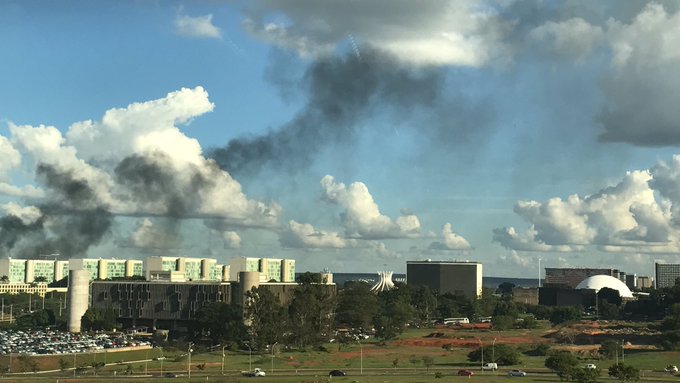 rasília the capital of Brazil and the Ministry of Agriculture

In less than five months, Brazil is expected to host the Summer Olympics.

If you follow LatAm politics, you know that that is an absolute joke. Last summer, the country descended into political turmoil and the economy sank into what might as well be a depression. Nine months later, inflation is running in the double digits, output is in freefall, and unemployment is soaring. On Wednesday, the government reported its widest primary budget deficit in history and less than 24 hours later, the central bank delivered a dire outlook for growth and inflation.

Meanwhile, VP Michel Temer’s PMDB has split with Dilma Rousseff’s governing coalition, paving the way for her impeachment and casting considerable doubt on the future of the President’s cabinet.

On Thursday, we learn that sports minister George Hilton has become the latest casualty of the political upheaval that will likely drive Rousseff from office in less than two months. “Brazil’s sports minister is resigning four months before the country hosts the Olympics, amid continuing uncertainty over the fate of six other cabinet ministers,” The Guardian wrote this afternoon, before noting that earlier this month, “Hilton left his party in an apparent bid to hold onto his job.”

Hilton had been sports minister for just over a year and although we’re sure any and all Brazilian cabinet positions come with lucrative graft opportunities, we imagine Hilton won’t end up regretting his decision to distance himself from the government and from this year’s Summer Olympics.

After all, there are quite a few very serious questions swirling around the Rio games. For instance: Will the water be clean enough for athletes to compete in? Will there be enough auxiliary power to keep the lights on? And, most importantly, will the games take place at all?