The book, Limits to Growth, published in 1972 was designed to publicize the findings of an MIT study funded by a group of European industrialists calling themselves the Club of Rome. Was this MIT collapse study correct? 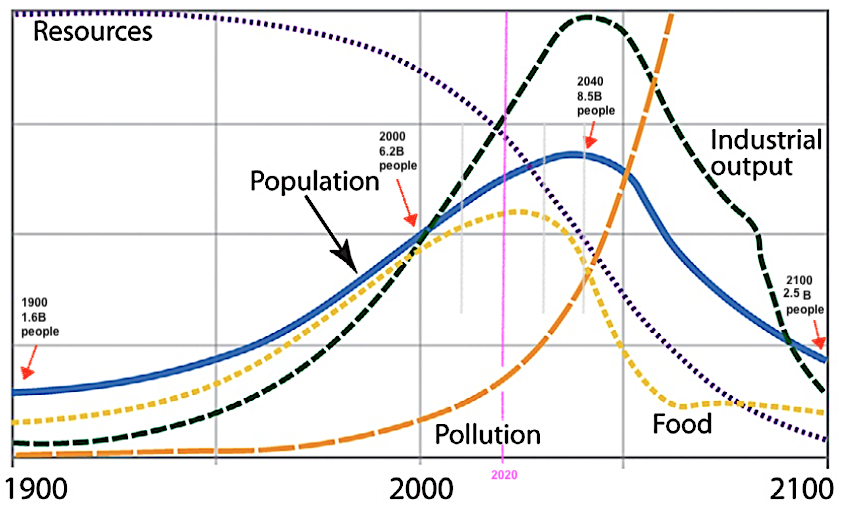 (This is Part two of our series on the Club of Rome predictions. It was written by Bruce Nappi, a long-time Job One for Humanity volunteer and a former Sandia National Lab, and U. California Lawrence Livermore National Lab scientist.)

These leaders, a number from the auto industry, were already encountering natural resource limits that impacted auto production. The goal of the study was to anticipate serious future production problems.

The observations made by the book, with the support of the U.N., were initially taken seriously by most world companies. Plans were developed and about to be enacted. The one significant country that did not go along was the U.S. Instead, the U.S. government, academia, and highly impacted companies, led by the carbon fuel industry, launched an effort to heavily discredit the program. They used the same approach and consulting firms that discredited the claims of tobacco and asbestos links to cancer. These same firms, and their approaches, with huge funding from the carbon industry, are currently a major force working to discredit scientific findings about global warming and climate change.

In the early 1970s, a significant scientific study was conducted that addressed the viability of infinite growth in human population and the economy. That study concluded these ongoing assumptions were not viable long term. In fact, the study realized that severe repercussions to the entirety of world society were inevitable in a relatively short time if major adjustments were not started immediately.

The scholar talks about the seemingly innocuous elements of our socialization that promote one-world view over another.

Tavis: Noam Chomsky is, of course, internationally recognized as one of the world’s most critically engaged public intellectuals. The MIT professor of linguistics has long been an unapologetic critic of both American foreign policy and the ideological role of the mainstream media.

He joins us now from MIT to talk about the seemingly innocuous elements of our socialization that promote one-world view over another. Before we start our conversation, a clip from “The West Wing” that I think will set this conversation up quite nicely.

Tavis: Professor Chomsky, good to have you on this program. Thank you for your time, sir.

Noam Chomsky: Glad to be with you.

Tavis: I think that clip, again, sets up our conversation nicely. Let me just jump right in. Why all these years later is the west better than the east, the north better than the south, Europe better than Africa? These notions continue to persist. Tell me why.

Chomsky: There’s a generalization. We are better than they, whoever we are. So if you look through the whole history of China, one of the most ancient, most developed, civilizations which, in fact, was one of the centers of the world economy as late as the 18th century, China was better than everyone else.