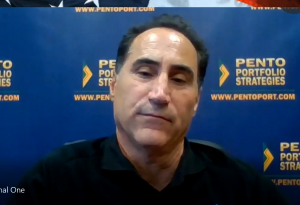 Money manager and economist Michael Pento predicts, “We are going to have an election in this country that is the most contested vote this country has ever seen.  Whichever party that loses is not going to accept the results.  That’s mad chaos for the stock market, and that is one of the things I am thinking about when I am managing money.”

Another thing Pento is thinking about is massive Fed money printing in response to CV19.  They have printed a massive amount in a very short amount of time.  Pento explains, “They borrowed $3.3 trillion in fiscal 2020.  All of it was monetized by the Federal Reserve.  We switched to an inflationary hedge, and that worked out wonderfully for us.  Then a funny thing happened at the end of July, the PPP loans, the paycheck protection loans, they were exhausted.  The money that was spent and sent by helicopter, $1,000 per adult, $500 per child and $600 in enhanced unemployment, that was all spent too.  So, you have this massive fiscal cliff I warned about is here and here now.  Last week, I got much more defensive. . . . We borrowed $3.3 trillion, and that was monetized by the Fed, and that is all going away.  The amount of new borrowing is done.”

Pento points out one huge lingering problem, and that is unemployment and people still collecting a check.  Pento says, “There are many programs that people have access to get unemployment insurance.  One of the major ones is called Pandemic Unemployment Assistance (PUA).  That number is 29.6 million people when you include continuing claims and pandemic claims for unemployment.  The PUA portion was up one million people last week.  The number of claims might be going down under the traditional channels, but they are all filing claims under the PUA.

Money Manager: ‘The Chaos Coming To The Markets Is Here’

Money Manager: ‘The Chaos Coming To The Markets Is Here’ Money manager Michael Pento says that profound chaos surrounding the economy is coming. The insolvency is becoming clear, and soon, we will no longer be able to sweep the problem under the rug.

Sitting down with USA Watchdog’s Greg Hunter, Pento discussed the chaos people predicting in the markets and says that it’s already here. Pento is the author of the book titled The Coming Bond Market Collapse, as well as a financial expert and he says the media is lying when they say the economy is doing well.

“There are so many things that can go wrong with rising interest rates.  First of all, you have to understand that the permabulls that you hear on CNBC will tell you there is nothing wrong with rising interest rates.  It is a symbol of growth.  If you look at industrial production and retail sales for January, they were negative.  So, rising rates are occurring, not because of growth, they are caused by insolvency concerns.  That is the key metric here, and they are credit risks and insolvency concerns.”

“For the first time in 40 years, you are going to have bond prices and equity prices in free-fall. That happened in the 1970’s, but it’s going to be worse because in the 1970’s, you didn’t have an insolvency concern. . . The chaos coming to markets is here. It’s not going away, and it’s not going to be brushed under the rug. It’s not going to stay on the sidelines for another few years. The years from 2007 to 2017 were the years central banks were buying everything. There was no volatility, and stocks just went up. Those days have ended, and the volatility is only going to become much more profound.”

Hunter then asks Pento to explain who is insolvent.  The answer isn’t calming in the least.