It’s official: the collapse of the mainstream media’s credibility is now complete

It’s official: the collapse of the mainstream media’s credibility is now complete

(Natural News) Attorney General William Barr held a press conference this morning to address the contents of the Mueller report, just as he promised to do. Not long after, Barr delivered the full Mueller report to the public with necessary redactions, also as promised. And yet the mainstream media, which demanded all of these things and has now received them, still isn’t happy.

In fact, most fake news media pundits are now foaming at the mouth, questioning Barr’s loyalties and accusing him of colluding with President Donald Trump to convey the “spun” message that he’s innocent – which it would seem as though no amount of evidence will ever convince those with Trump Derangement Syndrome (TDS) is actually true.

In a nutshell, Special Counsel Robert Mueller, whom Leftist Democrats have been hailing for the past two years as their savior and hero who was going to take down Trump, didn’t end up procuring what these Trump haters were wishfully thinking he would. And in response, Trump haters everywhere are reeling with more anger than ever, demanding that Mueller be burned at the stake for failing to prove their deranged conspiracy theories.

CNN White House Correspondent Jim Acosta about had a coronary in response to Barr’s press conference, accusing Barr of “clearly laying out a sympathetic presentation” of what’s supposedly in the Mueller report. Twenty-twenty presidential hopeful and Leftist Democrat Cory Booker similarly accused Barr of “undermining the independence of this entire process” for his speaking publicly about the Mueller report prior to releasing it.

CNN correspondent Jim Acosta returned to the White House on 17 November, a few days after a US judge had forced President Donald Trump to reverse the revocation of his press pass. Smiling before 50 or more photographers and cameramen, Acosta said triumphantly: ‘This was a test and I think we passed the test. Journalists need to know that in this country their First Amendment rights of freedom of the press are sacred, they’re protected in our constitution. Throughout all of this I was confident and I thought that … our rights would be protected as we continue to cover our government and hold our leaders accountable.’ Fade-out, happy ending.

Julian Assange probably did not watch the moving conclusion of this story live on CNN. He sought asylum in the Ecuadorian embassy in London six years ago, and his life there has become that of a prisoner: he cannot go outside for fear of being arrested by the British police, then probably extradited to the US; his access to communications is limited and he has been harassed repeatedly since Ecuador’s president, Lenín Moreno, decided to please the US and make conditions less comfortable for his ‘guest’.

The reason for his detention, and the threat of several decades in prison in the US (in 2010 Trump wanted him executed), is his WikiLeaks website which has been behind the major revelations that have inconvenienced the world’s powerful over the last decade: photographic evidence of US war crimes in Afghanistan and Iraq, US industrial espionage, secret bank accounts in the Cayman Islands. The dictatorship of former Tunisian president Zine al-Abidine Ben Ali was shaken by the leaking of a US State Department cable that referred to this kleptocracy, a US ally, as a ‘sclerotic regime’ and ‘quasi-mafia’.

Why You Should Care About the Julian Assange Case

Wikileaks founder Julian Assange, who has been inside the Ecuadorian embassy in London since the summer of 2012, is back in the news. Last week, word of a sealed federal indictment involving him leaked out.

The news came out in a strange way, via an unrelated case in Virginia. In arguing to seal a federal child endangerment charge (against someone with no connection to Wikileaks), the government, ironically, mentioned Assange as an example of why sealing is the only surefire way to keep an indictment under wraps.

“Due to the sophistication of the defendant and the publicity surrounding the case,” prosecutors wrote, “no other procedure is likely to keep confidential the fact that Assange has been charged.”

Assange’s lawyer Barry Pollack told Rolling Stone he had “not been informed that Mr. Assange has been charged, or the nature of any charges.”

Pollock and other sources could not be sure, but within the Wikileaks camp it’s believed that this charge, if it exists, is not connected to the last election.

“I would think it is not related to the 2016 election since that would seem to fall within the purview of the Office of Special Counsel,” Pollack said.

If you hate Assange because of his role in the 2016 race, please take a deep breath and consider what a criminal charge that does not involve the 2016 election might mean. An Assange prosecution could give the Trump presidency broad new powers to put Trump’s media “enemies” in jail, instead of just yanking a credential or two. The Jim Acosta business is a minor flap in comparison.

Ever since suspicions were confirmed that the Trump administration is indeed working to prosecute and imprison WikiLeaks founder Julian Assange for publishing authentic documents, the so-called “Resistance” has been struggling to explain exactly why it is so enthusiastically supportive of that agenda. And when I say struggling, I am being very, very generous.

When news broke that a court document copy-paste error had inadvertently exposed the fact that the Trump administration is pursuing an agenda which experts of diverse political persuasions agreewould have devastating effects on the freedom of the press, #Resistance pundit and DC think tank operative Neera Tanden responded by tweeting, “Never mess with karma”. As of this writing if you do a Twitter search for the words “Assange” and “karma” together, you will come up with countless Democratic Party loyalists using that concept to justify their support for a Trump administration assault on the press that is infinitely more dangerous than the president being mean to Jim Acosta.

The trouble with that of course is that “karma”, as far as observable reality is concerned, is not an actual thing. It’s a Hindu religious concept that is supported by no more factual evidence than the Roman Catholic claim that a priest literally turns bread and wine into the body and blood of a Nazarene carpenter who died thousands of years ago. A Democratic pundit using the concept of “karma” to justify enthusiastic support for Trump’s fascistic attack on press freedoms is exactly the same as a Republican pundit using “God wills it” to justify the existence of poverty, and it is just as intellectually honest.

But it’s also the best argument these people have got.

‘And we cannot help but notice that some of free speech’s greatest enemies are now posing as its defenders, all of a sudden.’

Tucker Carlson delivered a stunning monologue Wednesday, slamming CNN for posing as a champion of free speech, after the network spent months trying to have competitors silenced and banned.

“In the past couple of days, you’ve heard a lot of pumping and puffing about free speech and freedom of the press, and how those freedoms are currently imperiled by the White House, and to be clear, we are for free speech. Unfettered, absolute free speech.” Carlson urged.

“And we cannot help but notice that some of free speech’s greatest enemies are now posing as its defenders, all of a sudden.” he added.

And that’s when the smackdown commenced, with Tucker providing examples of CNN’s total hypocrisy when it comes to free speech.

“Take CNN, for example. It was a CNN that almost single-handedly led the campaign to have broadcaster Alex Jones banished from the Internet, on the grounds that they didn’t like what Jones had to say,” Tucker continued.

“Ultimately, CNN succeeded in doing that. The network convinced every major tech platform to ban Jones and his outlet, Infowars. You don’t have to like Alex Jones to see that as a terrifying loss for free speech, because it was exactly that. But CNN was not done trying to silence its critics.” Carlson further explained.

CNN is “claiming to defend free speech only when it is their free speech.” Tucker declared, noting that CNN also didn’t devote any airtime to even report on the US government forcing RT to register as a foreign agent under threat of imprisonment.

Now that the media is protesting the suspension of Jim Acosta’s credentials Sam Husseini asks why he and the other journalists didn’t intervene on his behalf when he was expelled from a news conference.

CNN’s Jim Acosta has had his White House press credentials suspended following a tense exchange with Trump on Wednesday. CNN, the White House Correspondents’ Association and others have denounced the move.

On a superficial level, I empathize with Acosta. At press conferences I try to ask tough questions. At State Department briefings, spokeswoman Heather Nauert has carefully avoided calling on me, especially after this exchange when she refused to say what State’s position was on torture and evaded criticizing Saudi Arabia and Israel.

I was suspended from the National Press Club for a time (the ethics committee eventually overturned it) after confronting a Saudi autocrat at the start of the Arab uprisings. And this summer I was forcibly ejected from the Trump-Putin news conference in Helsinki for nothing more than carrying a sign with the subject of my question — a tactic I hoped would increase my chances of getting called on. 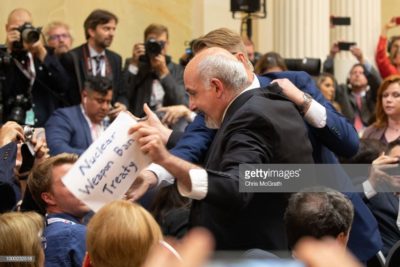 This is interesting in part because of how he and his network failed to extend that same solidarity to me that day in Helsinki. Among other things, after I was forced out of the room, while clutching my sign, “Nuclear Weapon Ban Treaty,” Anderson Cooper asked Acosta what was going on.

There are reports that MSNBC’s Rachel Maddow has organized a protest march for today denouncing Trump for firing Sessions. https://news.grabien.com/story-msnbcs-maddow-organizing-street-marches-protest-sessions-fir

CNN’s Jake Tapper added his view of the firing as “that’s how gangsters act” and got John Dean from the Watergate era to delare that Sessions’ firing was “planned like a murder.” https://www.cnn.com/videos/politics/2018/11/07/saturday-night-massacre-sessions-john-dean-jake-tapper-newsroom-intv-bts-vpx.cnn

It is the same story elsewhere in the presstitute media.

The presstitutes are upset about Sessions being fired, because Sessions recused himself from the Russiagate investigation, thus permitting Mueller to go beyond his mandate. Mueller’s indictment of Manafort, for example, has nothing whatsoever to do with Russiagate. The Trump-hating presstitutes and Trump-hating Democrats still hope to make something of the investigation that has come up completely empty after two years, whereas a functioning attorney general will close down the investigation as having found nothing and wandered off into unrelated matters.

As Maddow illustrates, the presstitutes have become political activists who use their media positions not to report, but to campaign against Trump, whether it is Maddow over Sessions or CNN’s Jim Acosta over the caravan from Honduras. https://www.breitbart.com/politics/2018/11/07/white-house-suspends-jim-acostas-press-pass-after-combative-briefing/

Indeed, Larry King, a CNN host for 25 years said that CNN stopped doing news in order to do in Trump. https://thehill.com/homenews/media/415669-larry-king-hits-cnn-stopped-doing-news-to-focus-on-trump