Dissecting the Madness of Economic Reason

David Harvey’s latest book provides a riveting reading of Marx’s Capital and a trenchant critique of a political and economic system spiralling out of control.

A decade after the financial crisis of 2008, global capitalism remains in dire straits. Despite central banks providing a steady diet of low interest rates and pumping over $12 trillion of new money into the world economy through quantitative easing, growth remains anaemic, even as debt levels in many countries are back on the rise and inequality rapidly spirals out of control. Secular stagnation now goes hand in hand with the emergence of new speculative bubbles in stocks and housing, raising fears that fresh financial turmoil and further debt crises may only be a matter of time.

With mainstream economics clearly incapable of providing a satisfactory account of capitalism’s inherent tendency towards crisis formation, the past decade has seen a resurgence of interest in the work of Karl Marx, undoubtedly the most astute observer of the system’s internal contradictions. Perhaps no other living scholar has played a more important role in this renaissance of Marxist theorizing than David Harvey, the geographer whose many books and celebrated online course on Capital weaned a new generation of students and activists on an innovative reading of Marx’s critique of political economy. 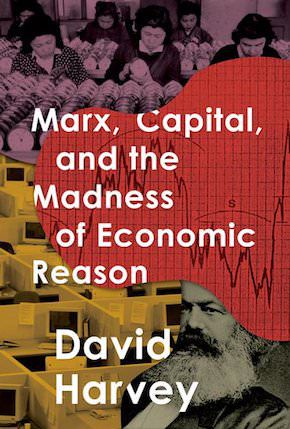 In his new book, Marx, Capital, and the Madness of Economic Reason, Harvey provides a concise introduction to Marx’s theoretical framework and a compelling argument for its increasing relevance to the “insane and deeply troubling world in which we live.” Fleshing out a number of ideas first presented as part of a lecture series at the City University of New York, where he is Distinguished Professor of Anthropology and Geography, the book is characteristic of the “late Harvey”: incisive in its analysis, sweeping in its scope, accessible in its style and laced with profound insights on the madness of the economic system under which we live.