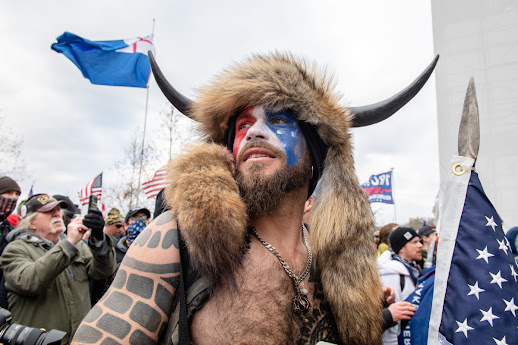 Jake Angeli, high priest of the growing cult of Emperor Donald Trump, dressed as the horned God Cernunnos. The deification of Emperor Trump in Washington, yesterday, didn’t go so well, but we are moving along a path that the Romans already followed during the decline of their empire, including the deification of emperors, starting with Caligula. So, comparing Roman history to our current conditions may tell us something about the future.

I already speculated on what kind of Roman Emperor Donald Trump could have been and I concluded that he might have been the equivalent of Hadrian. The comparison turned out to be not very appropriate.

Clearly, Trump was no Hadrian (a successful emperor, by all means). But, after four years, and after the recent events in Washington, I think Trump may be seen as a reasonably good equivalent of Caligula, or Gaius Caesar Augustus Germanicus, who also reigned for 4 years, from 37 to 41 AD.

Caligula was the prototypical mad emperor — you probably heard that he nominated his horse consul. And he was not just mad, he was said to be a cruel, homicidal psychopath, and a sexual pervert to boot. In addition, he tried to present himself as a living god and pretended to be worshipped. He even claimed to have waged a war against the Sea God Poseidon, and having won it!

But, really, we know little about Caligula’s reign, and most of it from people who had plenty of reasons to slander his memory, including our old friend Lucius Annaeus Seneca (he of the “Seneca Effect“) who was a contemporary of Caligula and who seriously risked being killed by him. The Romans knew and practiced the same rules of propaganda we use today. And one typical way to slander an emperor was to accuse him to be a sexual pervert.