Why do you believe what you believe?  Some people have a really solid answer to that question, but much of the population never thinks much about deeper questions such as this.  In fact, for most Americans it is simply easier to let others do their thinking for them.  Today, most of us spend multiple hours each day absorbing information through a screen, and most of the content that is fed to us through our televisions, phones, tablets and computers is controlled by the elite.  And if you allow anyone to feed information into your mind for several hours every day, it is going to have a dramatic impact on how you view the world.

When I was younger, one of my favorite movies was “The Matrix”, and I think that it is a really good metaphor for what is going on in our society today.  In the film, nearly the entire human population was plugged into a system which continuously fed a computer-generated reality into their minds that wasn’t real at all.  Later on, I eventually came to realize that we are willingly doing the same thing to ourselves.  Our personal interactions with one another are extremely limited, but we willingly “plug in” to the enormous matrix of news, information and entertainment that the elite have constructed for many hours each day.

The news media have contributed to our deteriorating—but entertaining—political situation. Mr. Trump is President partly because he is entertaining. My research on TV news shows that the promotion of the politics of fear is a byproduct of entertaining and sensationalized reports to build audience ratings. Contemporary news practices have increasingly been wedded to new information technologies that provide visuals and images, particularly portable cameras and smart phones. The entertainment format of much of U.S. TV news promotes the use of video or other visuals that are dramatic, conflictual, and emotional. Screen images dominate broadcast news as well social media. Investigations of news coverage of numerous local, national, and international news reports reveal how our current “news code” operates. Basically, TV tells time with visuals. Although the intent may be to use visuals to tell a story about something, the logic in use amounts to telling a story about the visual at hand. Events that are more likely to satisfy these format criteria are more likely to be broadcast.

Our work over the last 4 decades also demonstrates that politicians and others who provide visual events and dramatic performances are more likely to receive news coverage. We have documented the profound effects this format-driven media coverage has had on social institutions ranging from sports, news, politics, education, and religion.

Contemporary news practices continue this trend. Indeed, even the prestigious evening network newscasts have adopted this approach, especially as social media have provided seemingly ubiquitous videos of a wide array of events, many of which are posted on Facebook, YouTube, Instagram, etc. As newscasts seek higher ratings, it should not be surprising that they have adjusted their selection of news items to include visually interesting bits that have already been viewed—or gone viral—on the internet and social media. 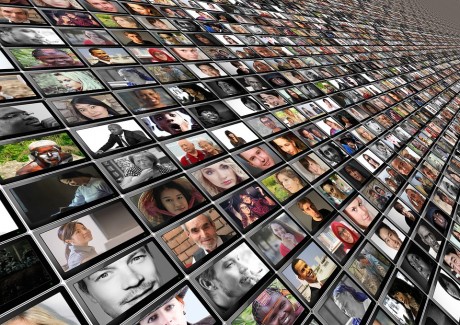 If you allow someone to pump hours of “programming” into your mind every single day, it is inevitable that it is eventually going to have a major impact on how you view the world.  In America today, the average person consumes approximately 10 hours of information, news and entertainment a day, and there are 6 giant media corporations that overwhelmingly dominate that market.  In fact, it has been estimated that somewhere around 90 percent of the “programming” that we constantly feed our minds comes from them, and of course they are ultimately controlled by the elite of the world.  So is there any hope for our country as long as the vast majority of the population is continually plugging themselves into this enormous “propaganda matrix”?

Just think about your own behavior.  Even as you are reading this article the television might be playing in the background or you may have some music on.  Many of us have gotten to the point where we are literally addicted to media.  In fact, there are people out there that become physically uncomfortable if everything is turned off and they have to deal with complete silence.

It has been said that if you put garbage in, you are going to get garbage out.  It is the things that we do consistently that define who we are, and so if you are feeding your mind with hours of “programming” from the big media corporations each day, that is going to have a dramatic affect on who you eventually become.

These monolithic corporations really do set the agenda for what society focuses on.  For example, when you engage in conversation with your family, friends or co-workers, what do you talk about?  If you are like most people, you might talk about something currently in the news, a television show that you watched last night or some major sporting event that is taking place.

Virtually all of that news and entertainment is controlled by the elite by virtue of their ownership of these giant media corporations.

I want to share some numbers with you that may be hard to believe.  They come directly out of Nielsen’s “Total Audience Report“, and they show how much news and entertainment the average American consumes through various methods each day…